Lately, the Jeep Cherokee led me on a bit of a rollercoaster with regards to how I feel about it.

The last generation, which saw the rebirth of the Cherokee nameplate in Canada after a six-year sojourn in Liberty-land, was eye-opening at the outset. With the exception of the trademark seven-slat grille, this was different than any Cherokee or any Jeep that came before it thanks to the crazy DRLs that sat atop the hood, Nissan Juke-style. The headlights were mounted lower down, but I’m fairly certain most who first saw the body-code KL Cherokee were sure the DRLs were the headlights, and that threw them off. It threw me off as well, but in the end I grew to like them for their uniqueness. It appears Hyundai did, too, as many of the Korean manufacturer’s current SUVs use a similar treatment.

But almost as soon as that crazy fascia arrived, it was gone once the Cherokee was facelifted for the 2019 model year. Just as I was beginning to like it!

That said, when I first encountered the new Cherokee at the 2018 North American International Auto Show, for some reason the loss of those DRLs didn’t immediately strike me, maybe the new Cherokee looks pretty good. Sure, the lights have softened a little, but you’ve still got that great grille andthe proportions are identical. Plus, on my Overland tester, details like two-tone 19-inch rims, Olive Green Pearl paint, chrome stripping around the windows and silver roof rails add a nice touch of class to Jeep’s entry into the competitive compact CUV market - as does the light smoking on the headlights and taillights.

On the other hand, there were a couple of times I approached it anew and thought it had been replaced with the smaller Compass; the two look more alike now than ever before. 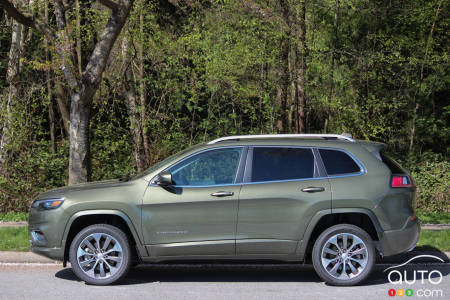 Inside
The interior is yet another revelation, except that, when you think about it, it isn’t really that much of a jolt. Because lately most everything coming out of Jeep’s FCA parent company has the interior accoutrements down pat. Small panel gaps, high-quality materials in all the most important areas and smart lighting and infotainment are all orders of the day.

In the Overland I had, it’s taken to the next level via the gorgeous Dark Sienna (I love brown interiors) seats and leather-wrapped steering wheel with wood accents. While some may complain about the lack of visual flare inside compared to the competition, my buddy’s 1993 cloth-seated Cherokee this definitely is not.

It’s not impossible to find some shortcomings, though. The gear lever, for example, is almost cartoonishly large and the gauge cluster is a pretty basic affair, though to its credit it is easy to read and keeps glare low. The front seats are roomy enough, but the rear seats have a fairly high mount; that’s great for shorter occupants who want to see up ahead, but not so great if you’re a taller build. Many rivals like the Mazda CX-5, Ford Escape and Honda CR-V have more room back there. 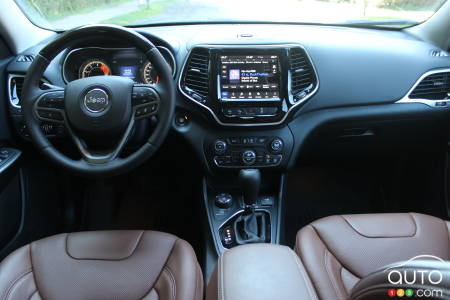 Headroom is naturally of little consequence when it comes to fitting a child seat, which we managed to do with little drama and without much damage to front passenger legroom. The back seats also fold almost completely flat for a total 1,550 litres of cargo space (more than previous, but still less than the likes of the CR-V and Nissan Rogue). I would have preferred a 40/20/40 split to the 60/40 split seen here. Indeed, while the latter is the setup most often seen in cars, the former is increasingly popular these days.

The cargo area is easier to access, meanwhile, thanks to a hatch crafted from composite materials and optional foot-activated tailgate.

Multimedia
None of the competition can touch the Cherokee in the infotainment department. Ford’s SYNC3 comes close, but it doesn’t provide the Cherokee’s massive 8.4-inch display, which in turn provides big on-screen buttons that can be easily operated while on the move. Being of the Uconnect 4 variety, the Cherokee’s system now supports both Apple CarPlay and Android Auto, which is nice. I don’t love that you have to use it for your seat heater and steering wheel controls, though. It takes an extra step to use these features and while it’s nice that the controls immediately appear on the screen on start-up, some good that does when you’re in the middle of driving with gloves on. 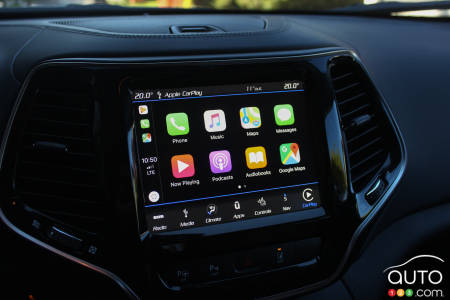 Power for my tester came from the newest of three available engines, a 2.0L turbo four good for 270 hp and 295 lb-ft of torque. A 3.2L V6 is also available, as is a naturally-aspirated 2.4L four.

The engine is surprising in its delivery; I wasn’t even sure I had the four until I looked under the hood, so speedy is its response. It’s not like peak torque and power are available that low in the rev band, either; they come at 3,000 rpm and 5,250 rpm, respectively, so you do need some revs to get going.

Helping you meter that acceleration out is a 9-speed automatic transmission, the ratios of which do allow for quick acceleration. And you can shift it yourself, as long as you’re OK to use that oblong shifter as opposed to a pair of wheel-mounted paddles, which the Cherokee doesn’t have. If you ask me, though, a 2.0L four is the sweet-spot engine for the Cherokee, as it has proven to be in so many other CUVs of late. 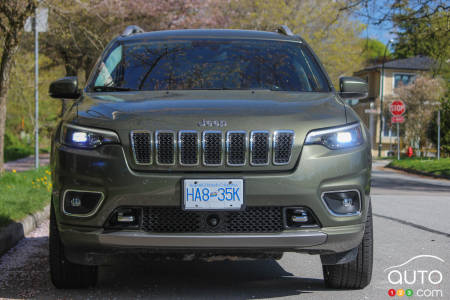 I wasn’t enamoured with how slow the transmission is to engage gears, both when you’re driving and when you’re selecting between P, R, D and so forth. It’s also often quite clunky when it does finally engage, sometimes making me feel like there was actually something amiss with the transmission. It’s a strange beast, this 9-speed; having tried it on V6 models, I think it’s a better fit there. I was also distracted by the engine note on acceleration; it’s quite high-pitched, and I found myself focusing on it more…and more…and more, the more I drove. A little bit of sound deadening would go a long way here.

So while the powertrain remains a little schizophrenic, the chassis is a masterclass in ride and handling. While this particular trim isn’t Trail Rated, it still gets Active Drive II AWD that provides a two-speed transfer case for better performance in 4 Low, a hill-descent system and locking front and rear driveshafts. Which means that, while you may not be climbing rocks in this particular Cherokee, it has no problem handling the more mundane stuff like loose gravel and snow. In fact, it has selectable drive modes for both these conditions, as well as a Sport mode for the drier, bendier stuff.

Indeed, to compete in this segment, the Cherokee needs to cover a lot of bases; it’s no longer enough to just provide good off-road chops and live off Jeep’s good name. 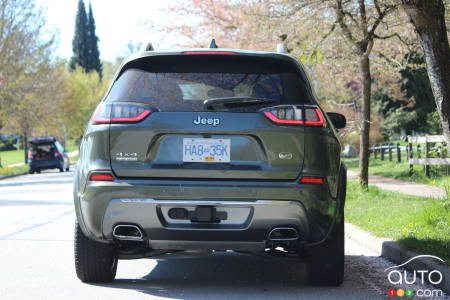 Speaking of on-road versus off-road: the Cherokee’s ride really does have to be felt to be believed. It’s just so confident and predictable, but at the same time insulating and smooth overall. You’d never know that you’re in a vehicle that has roots in the world of off-roading, but there you have it.

The new turbo is the real story here, though – which is a bit of a shame, I guess, because it would be a much bigger story if it weren’t for that pesky transmission. Otherwise, it’s a powerful, responsive powertrain mated to an active – but not overactive – chassis that is de rigueur in the segment. 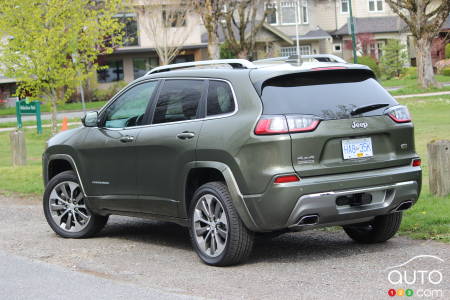 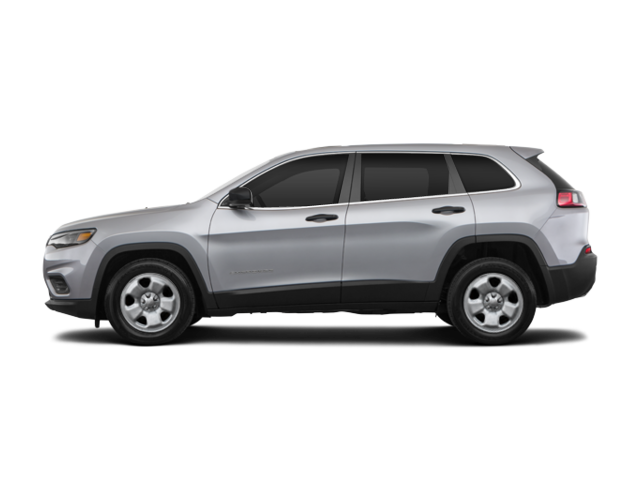 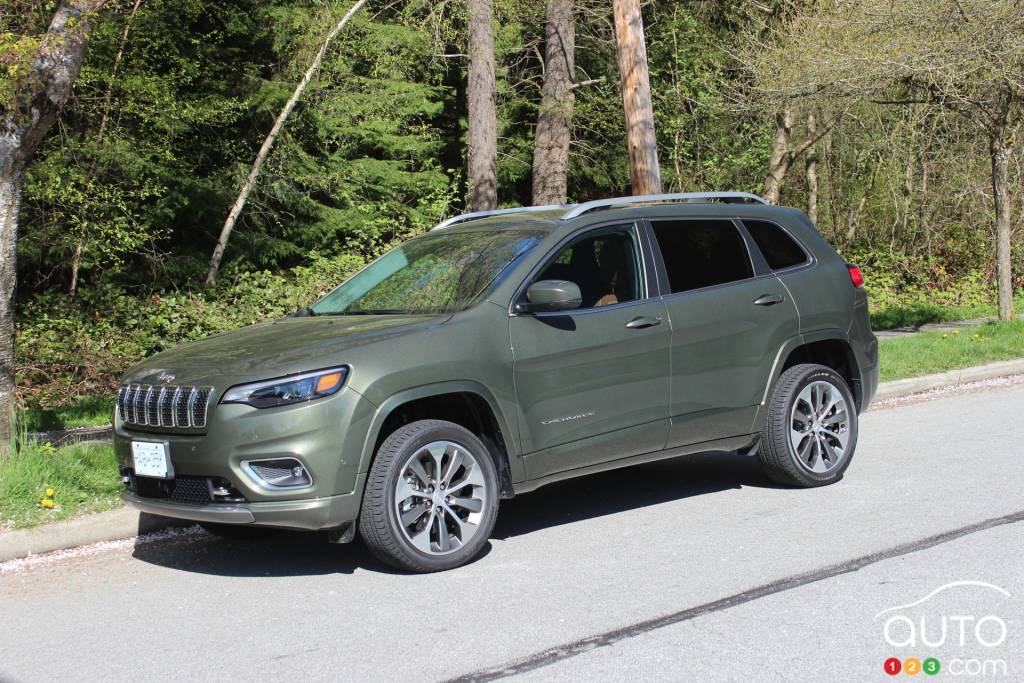 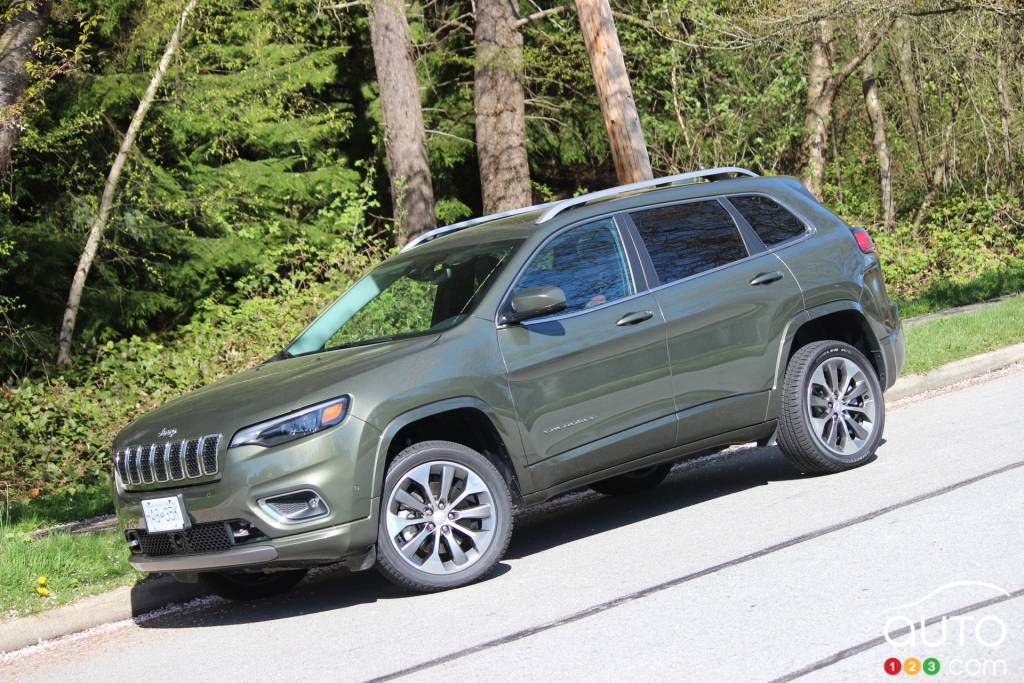 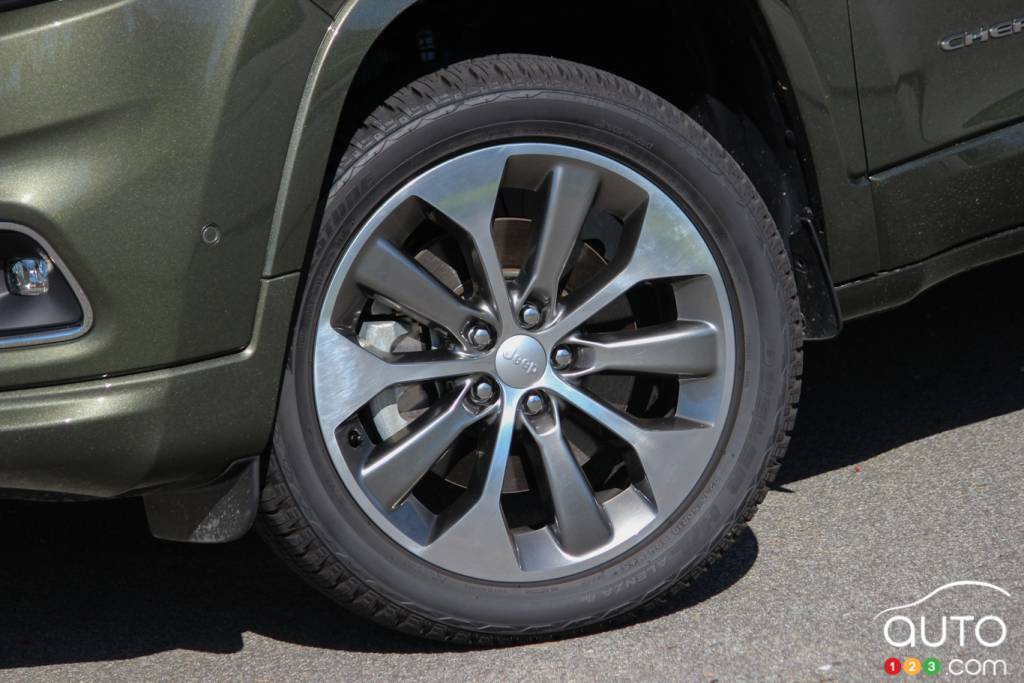 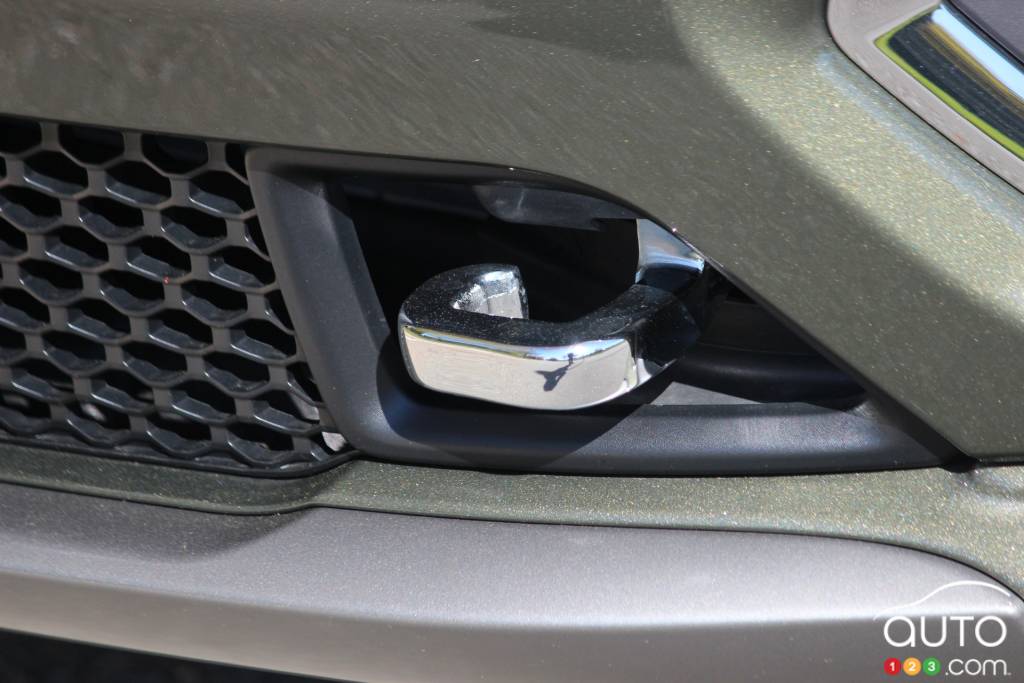 The updated 2019 Jeep Cherokee sports a new design that breathes elegance and high end, which is matched by improvements brought to the powertrains and other...