Auto123 reviews the 2019 Mercedes-Benz A250 4Matic, the brand's new entry-level mode for the North American market

Fifteen years ago, the entry-level model at Mercedes-Benz was the C-Class. It was opposed by the A4 from Audi and the 3 Series from BMW, both of which were those brands’ gateway models. That was the reality then.

Over the years, and with the increasing accessibility of luxury vehicles due to access to leasing, manufacturers came to realize that there was room for other models, cheaper and able to compete with top-end versions of mass-market models. 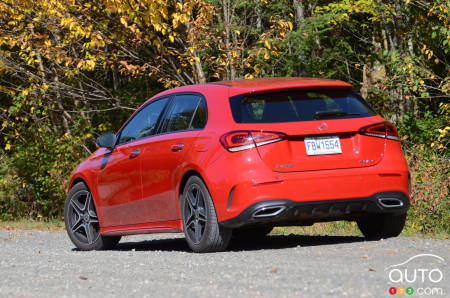 A missed first attempt
At Mercedes-Benz, the first attempt to introduce a more accessible entry-level model in North America was launched in 2007. The B-Class, a kind of three-way mashup of SUV, car and wagon, hit the market with a list price under $30,000.

It was appealing to anyone who had long been dreaming of buying a Mercedes-badged model. The harsh reality, however, was that while the model wasn’t without qualities, it offered little to write home about.

After enjoying some initial success, the B-Class dropped off consumers’ radar and has since been forgotten. The company tried to revive it with the addition of AWD a few years ago, but it never really took hold on the market. 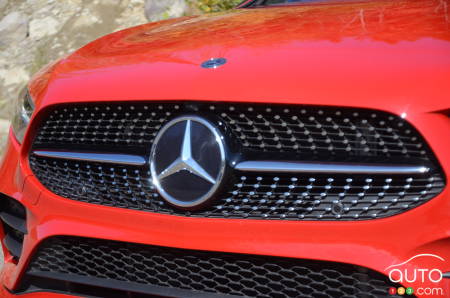 Second time’s the charm
Which brings us to the A-Class, the latest attempt by the German automaker to position a real an entry-level solution on the North American market. In between, I should point out, Mercedes-Benz also tried to have the CLA and the GLA SUV fill the role of gateway model.

Launched last year, the A-Class is a more serious offensive in every respect. In the past, with the B-Class, it was nice to have the Mercedes-Benz logo and all, but quality seemed to be lagging behind. The new model does not give that impression, and in terms of technology, the little model is fitted with features normally reserved for much more expensive models.

That's why, in my view, this new attempt is a more serious one by the carmaker. In a nutshell, it boils down to good grades in three crucial subjects: the product offering, the cabin and road handling. 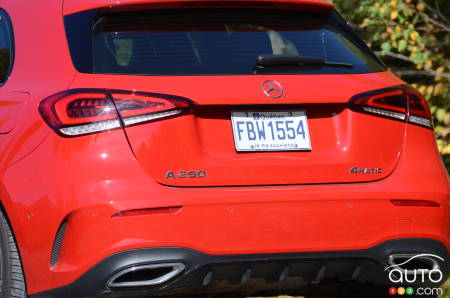 What's on offer
Often, the key to success for a model lies in the diversity of the offer built around it. With the A-Class, Mercedes has covered virtually every possible base. There are two body configurations, the sedan and the hatchback. An entry-level front-wheel drive version is available with the first of those, the A220, which is the "affordable" model (and of which we’ll have a separate review in the coming weeks). All-wheel drive is possible with this 4-door.

I drove the hatchback variant, the A250 4Matic, and in its case AWD is standard equipment. Otherwise, if performance is at the top of your list of priorities, the AMG A35 is the one to consider, and it'll show up a little later.

By taking such wide aim, the automaker is clearly making sure to maximize potential sales of its intro-level A-Class. 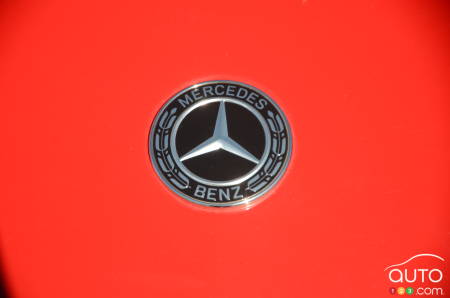 The interior
The first impression you get when you settle inside is that you're not sitting in an entry-level model. Not to belabour the comparison, but that was pretty much the feeling you had inside the B-Class. The difference is striking, and to the advantage of the new A-Class.

The most attention-grabbing element is the dashboard, consisting of a huge screen that has two main functions: give users the traditional information with the help of digital gauges and graphics of any kind, and also group together the menus and functions of the MBUX (Mercedes-Benz User Experience) multimedia system.

Regarding the latter, it has everything to appeal to tech enthusiasts. The voice-recognition system, which rivals those of Siri and Google, is quite effective - all you have to do is say "Hey, Mercedes", followed by what you want to get as information or execution, and the system obeys. Hours of fun... 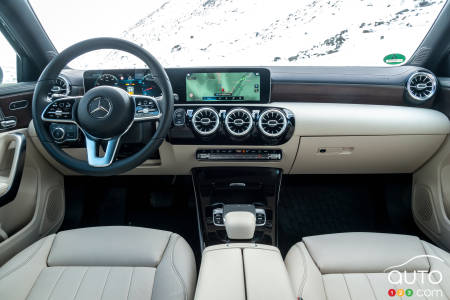 Truth is, it's great fun at first. Then you find the functions that are useful to you, and those are the ones you come back to. During my test week, I liked being able to adjust the temperature by ordering the car to do so. Same goes for changing stations on the radio.

Moreover, the visual presentation is successful and the ambient lighting, which can be configured as desired with a seemingly infinite choice of colours, adds a touch of class to the whole thing. The same applies to the choice of materials, which impossible to criticize.

Having said all that, I confess I miss the beautiful gauges that the company offered not so long ago. The abundance of these screens, as magnificent as they are, leaves me cold. 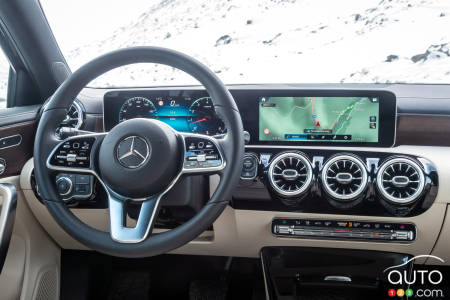 The drive
The A-Class, in A250 4Matic configuration, is not a sports car, but it can be driven sportily. The nuance is important, because when it comes to the driving dynamics you can’t really compare this car to a BMW 2-Series, for example. On the other hand, when stacked up against the Audi A3, the A-Class comes out ahead.

Basically, you can feel the car firmly planted under your butt. On-road comfort is excellent and the steering is well-calibrated, which guarantees a predictable and comfortable ride. To find the limits of this car, you'll have to seek out your own, which says a lot about what this A-Class is capable of.

The 2.0L turbocharged 4-cylinder, engine delivers 221 hp and 258 lb-ft of torque, offering enough power that you’ll never feel you’re falling short. The 7-speed automatic transmission that serves it does a good job, but when you push the car, you'll wish it was quicker to execute. That brings us back to point one: this is a car that can be driven sportily, but it’s not a sports car at heart. 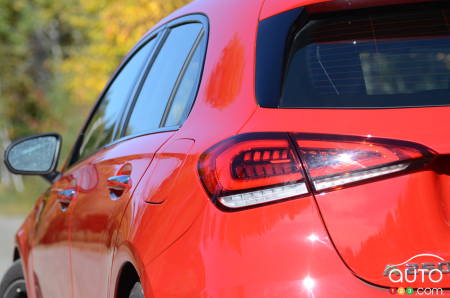 Still, on the whole, you have a good time behind the wheel. Much better, though, to let yourself be seduced rather than have prior expectations that could be fallen short of.

One major irritant did spend the week annoying me, and that was the helicoptering parenting of the over-zealous drive-assist systems.

Conclusion
10 or 15 years ago, many on this continent were wondering why we weren’t being offered the A-Class available on the European market. It was a question of market and price, we were told at the time.

Times have changed, I guess, because now seems to be a good time for the A-Class to make a breakthrough. And, based on my week spent with it, the model has the tools to do it.

Consumers will be the final arbiters, of course, as they always are... 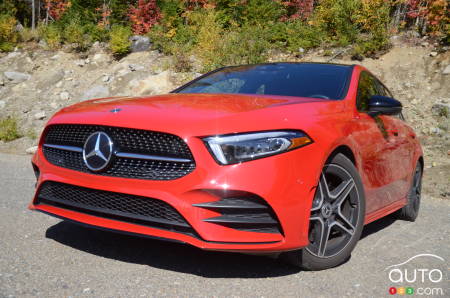 The cost of the many options – it brought the price of our test model up from $37,990 to $48,490
Intrusiveness of the driving aids
Mercedes-Benz's own (and not always logical) ergonomics 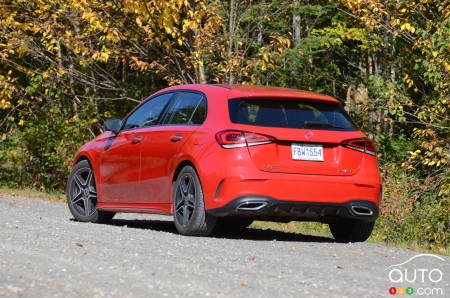 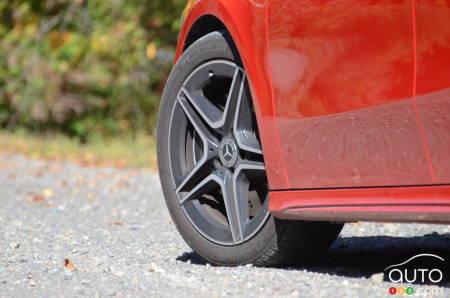 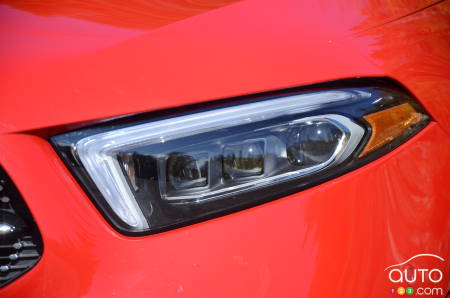 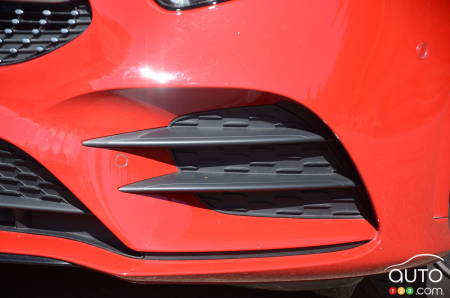 Make no mistake, the 2021 Mercedes-Benz A35 AMG Hatch, a reasonably priced (for something with a Silver Star on it) little car, is a luxury Mercedes through ...