The Porsche Taycan Turbo S I was given to test out looks pretty much exactly like the Mission E prototype unveiled at the 2015 Frankfurt Motor Show. Same pearly white color, same tapered headlights with four diode blocks that cover large vertical air intakes. Same smooth muzzle without the grille that makes it look like a 911. Which is totally intentional, of course.

The Taycan Turbo S even sits on wheels that are almost identical to those of the prototype, except that its aluminum rims have five black spokes instead of seven. To situate it, the Turbo S is the fastest, most powerful and most expensive of the new Taycan lineup, which also includes the Turbo and 4S. The automaker presents them as sports cars even though they have all the attributes of luxury and performance sedans. Including four doors that open in the same direction instead of the Mission E's opposite-hinged doors. A stylist's fantasy.

The Taycan may be configured as a sedan, but it's sleek and streamlined like a coupe, with a receding roofline. The Taycan Turbo S also looks like a Panamera, with its curved fenders and a wide rear section that thin LED headlamps pass through in one sweeping stroke. However, it is 23.6 cm shorter and 5.5 cm lower on 2.8 cm wider tracks.

Like a glove
Once the frameless door is open, you get down into a Taycan instead of climbing in. Just like in a sports car. The interior is particularly well executed with a meticulous finish that wraps the thick, rich Burgundy Red leather of the well-sculpted sport seats, the centre console, the lower portion of the dashboard and the upper portion of the storm doors.

Visibility is superb, despite an incredibly thin rear window. You get used to it, strangely enough. The driving position is impeccable and you can save three sets of settings for the seat, mirrors and steering wheel. The rear seats are designed for the average 1.75-metre tall adult, according to Porsche. The seat is low and hollowed out to clear the heads under the arched roof. The backrests fold down to lengthen a trunk, which still only offers up 366 litres of space. There's another small 81-litre trunk under the front hood.

The dashboard stretches straight away from the front passenger door to the driver's pod, where it opens upward to accommodate a most impressive 16.8-inch concave digital display with a virtual interpretation of the 911's quintet of dials and buttons for the headlights, anti-skid and suspension, including the system that lifts the front of the car for sloping entrances and speed bumps. Good thing that one’s there, too, because otherwise, the muzzle of the Taycan would regularly be scraping the asphalt.

Controls for most functions are grouped together on the 10.9-inch centre screen, while the console screen specializes in air conditioning and charging. An optional fourth screen allows the passenger to access navigation and entertainment data for $1,280. The myriad different systems you’ll encounter do require some serious learning, be forewarned.

The driver can clearly see the three configurable centre dials in the upper semicircle of a sports steering wheel that appears to be transplanted directly from a 918 Spyder. You have to tilt your head to read the other two. On the steering wheel, the secondary controls are effective and a thumbwheel allows you to switch between the five driving modes in a fraction of a second: Range, Normal, Sport, Sport Plus and Individual (programmable).

Range mode maximizes range on a full charge by toning down the climate control system and limiting the car’s speed to 110 km/h. Sport mode sharpens the throttle and tightens the steering and suspension while Sport Plus pushes things up yet another a notch, activates the gunshot start and adds a synthetic engine sound worthy of an inter-galactic hunter.

Making like Han Solo
The Taycan Turbo S is powered by two permanent magnet synchronous motors that drive one axle each, like an integral cog. They instantly release a whopping 774 lb-ft of torque and up to 751 hp in overdrive mode when activated. It couldn't be easier. In Sport Plus mode, you press the brake with your left foot, push the gas pedal all the way down with your right, release the brake and off you go, just like the Millennium Falcon.

The Turbo S immediately pushes you into the back of your seat and reaches 100 km/h just 2.8 seconds later, without the slightest tire squeal, the torque distribution to each wheel continuously modulated by the computer and PTM anti-skid. Just push it and this queen of the Taycan clan devours the 1/4 mile in 10.71 seconds at 209.2 km/h. It also goes from 80 to 120 km/h in 1.9 seconds, the best recovery I've ever recorded. All these figures are amazing for a car weighing 2,295 kg. Its secret? A two-speed rear gearbox, with the first gear twice as high.

Under normal driving conditions, the Turbo S's maximum power output is 617 hp, similar to the Turbo's maximum ratings of 670 hp and 627 lb-ft. The difference lies in the stronger front engine for the Turbo S. The Taycan 4S, for its part, offers 483 hp, which rises to 563 in gung-ho mode.

These motors are powered by a 93.4 kWh lithium-ion battery that's extended under the floor to lower the centre of gravity and improve structural rigidity. Its unique 800-volt architecture uses copper wire that is half the weight and allows for a 5-to-80% recharge in 22 minutes and change on a 270 kW station. It will do even better on Electrify Canada's 350 kW chargers. I obtained 424 km of range using my Level 2 terminal with the Turbo S, while the Taycan's RNC rating is 323 km.

An athlete in street clothes
No need to worry about erasing speed in a Taycan Turbo S with its huge carbon-ceramic discs that are 420 mm in diameter at the front and 410 mm in diameter at the rear, pinched by aluminium calipers with 10 pistons in front and 4 behind. It stopped from 100 km/h over 34.3 meters in simulated emergency braking, two and a half tons or not, with just a slight dip of the nose.

Under normal driving conditions, Porsche claims that the electric motors provide 90 percent of the braking power, recovering up to 265 kW of energy. One thing's for sure: the modulation is impeccable and you hardly feel the transition to mechanical braking. Still, I wish I could drive the Taycan with one pedal, just for fun.

On the highway, the Turbo S is superbly stable and surprisingly smooth for a sports car, its air-spring suspension wonderfully smoothing out imperfections in Normal mode, even on the 265/35 and 305/30 tires with extremely low sidewalls that wrap around its 21-inch wheels. This Porsche is remarkably quiet too, thanks to the optional Premium Package's double-glazed windows, which I recommend.

Turn the steering-wheel knob to select Sport or even Sport Plus mode as you approach a series of curves and the Turbo S bares its teeth. You're immediately stunned by its poise, grip and remarkable agility, sharpened by its rear-wheel steering. It stays on the pavement, with almost no roll, up to indecent cornering speeds. At the very limit, the front tires finally start to whine, but up until that point, the Turbo S is simply formidable.

Whether you want to look at it as a luxury sedan with blistering performance or a surprisingly refined four-passenger sports car, the Taycan Turbo S transports the electric car to a new, previously unexplored realm. And that's just the first act.

Dry reactions on cracks and bumps (sport modes)
Rear seats and trunk a little tight
Rather average autonomy
It costs $238,910 with options 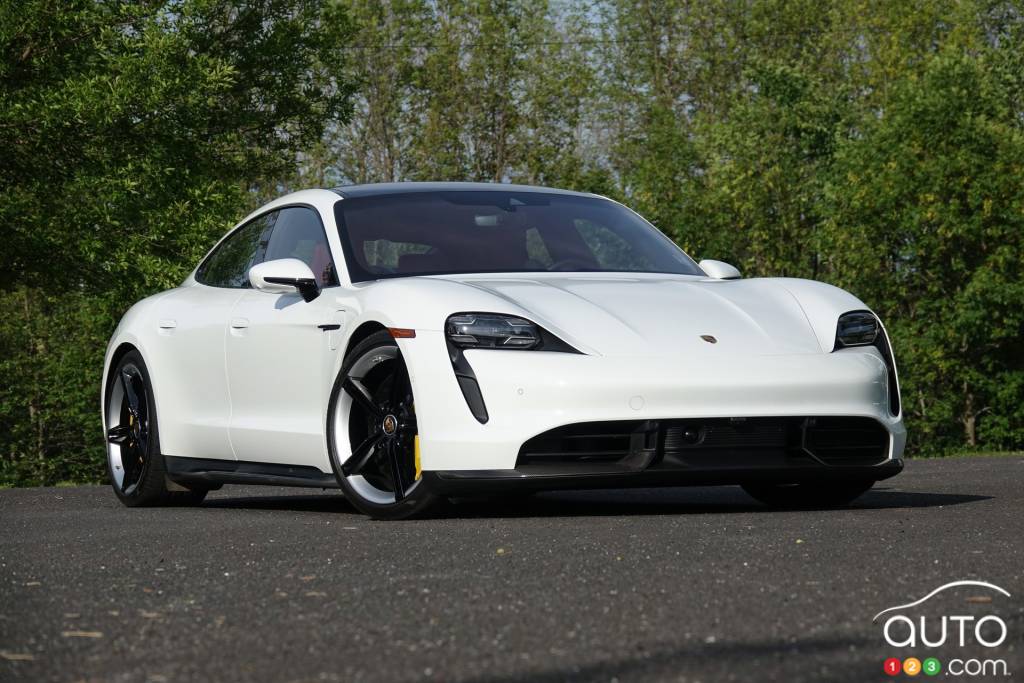 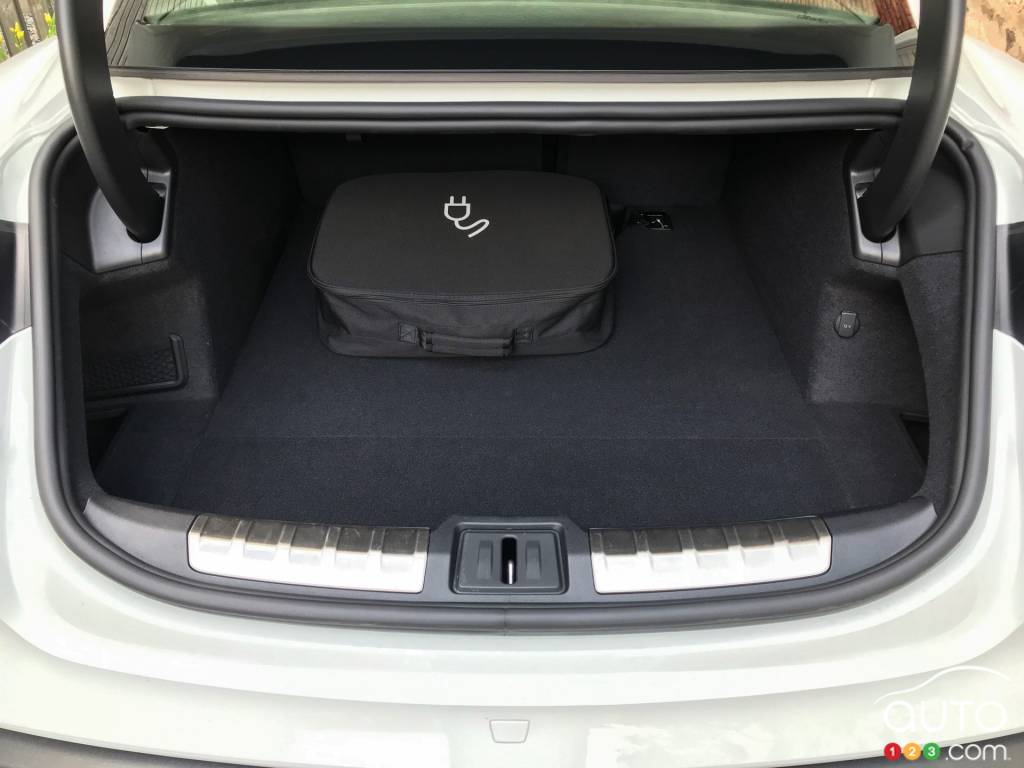 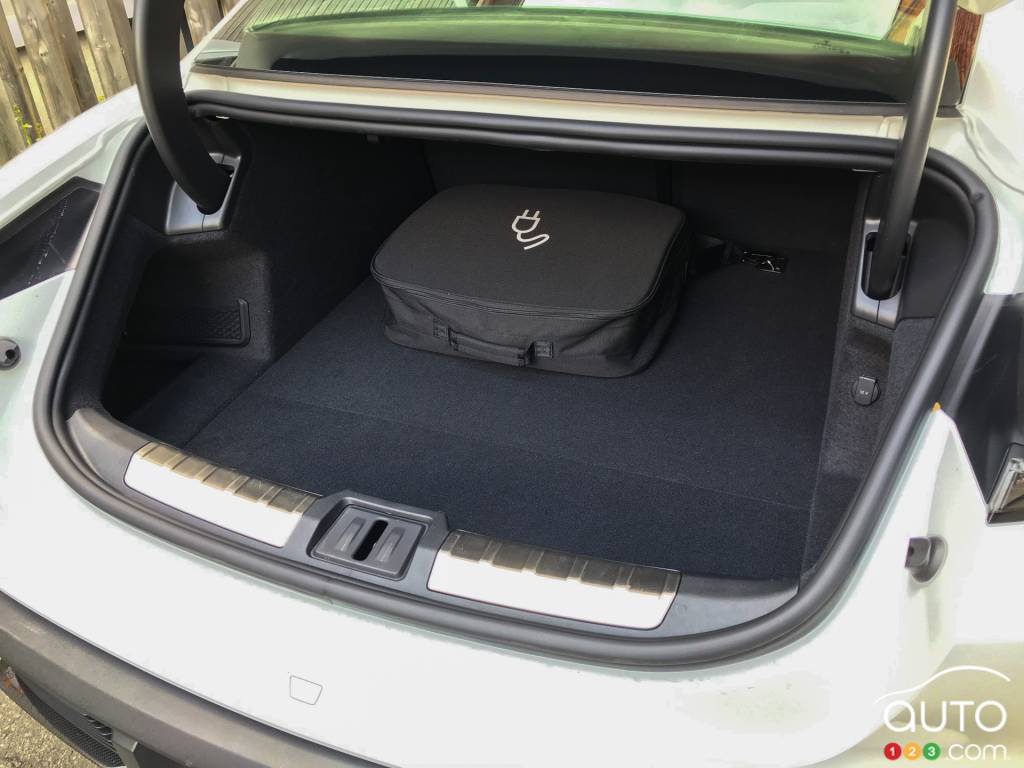 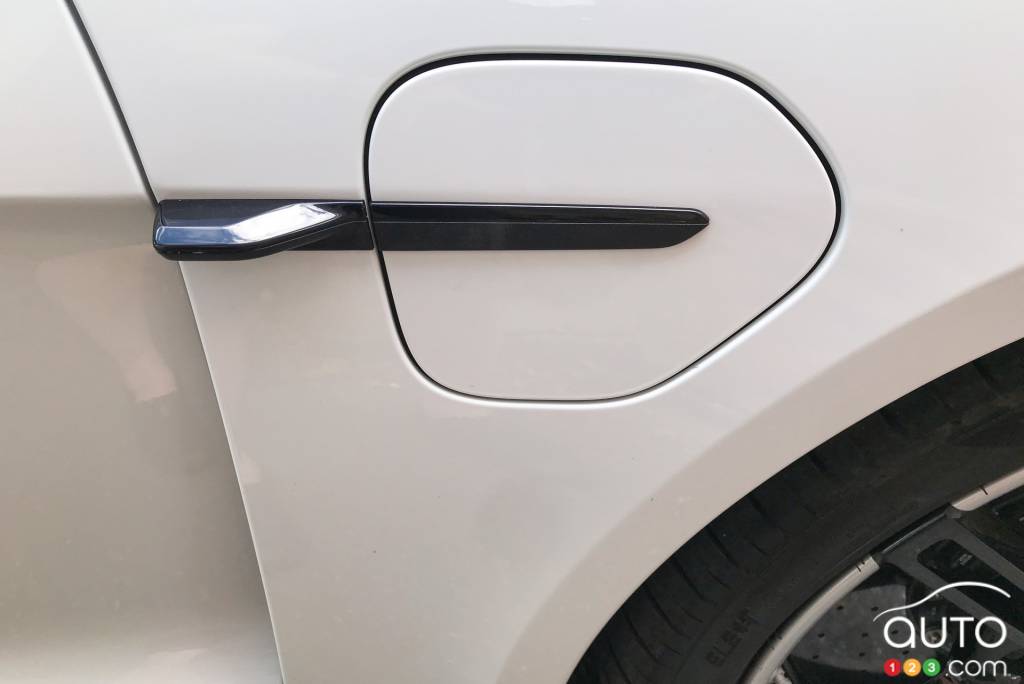