Elsewhere on the planet, the C-HR can be had with different engines, namely a 1.2L turbo and a 1.8L engine. The 144-hp 2.0L mill is exclusive to North America. Wedding that engine to a CVT transmission, Toyota gives official consumption figures of 8.7L/100 km (city) and 7.5L/100 km (highway). I’ve been trying since the start of my long-term test drive to make liars out of them, specifically by beating their numbers. As of now, the onboard computer gives me a combined figure of 7.2L/100 km - and this is without me adhering 100 percent of the time to best driving practices.

In fact, I’ve done my best to bust the consumption figures. Well maybe I should say I can’t help myself. Every time I hit the highway onramp near my home, I quickly find myself cozying up to 130 km/h before I even realize it (the C-HR gets there with surprising ease).

I’m brought back to earth by the sight of the overpass the other side of which is often frequented by my good friends in law enforcement. Whoa, horse-y! Off of the right pedal comes my foot. Clearly, this little C-HR has its heart in the right place. 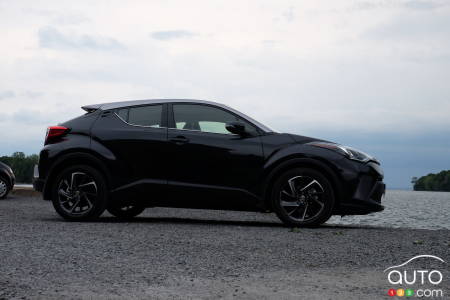 What not to do
On-ramping is one thing, but accelerating from a stop is another. If you try coming off the line aggressively, you’re in for a disappointment. That’s just not how the C-HR rolls. It can go from 0-100 km/h in just over seven seconds, which is acceptable for emergency situations, but it comes at a cost. The hellish noise coming from under the hood will make your teeth grind and your eardrums ache. My advice? Avoid emergency situations.

The CVT transmissions work well enough, that said. You can play with the gear shifter by simulating manual gear changes, and as long as you can tolerate the plaintive whining that grows in volume and urgency right along with the RPMs, it’s all fine. Like with alcohol, moderation is best. And it’s less hassle than moving to Europe so you can play with a real 6-speed manual gearbox.

Other than that, however, the C-HR is an agreeable companion on the road. Its format helps it behave nimbly, this even though the steering (the column of which is manually telescopic and reclining) prefers to act with passive resistance rather than enthusiasm. Although, that resistance makes for an overall solid feel on the road, which is pretty good is you like a reassuring ride. There are worse things than a small car that feels rugged.

Why can’t we have it?
Why does the rest of the world get a C-HR with AWD configuration but not us? I asked Romaric Lartilleux, Public Relations Manager for Toyota Canada, that exact question.

“Crossover does not automatically mean AWD. The C-HR is mainly conceived for urban/suburban driving, and most buyers won’t need what all-wheel drive brings. Before the C-HR launched, we had discussions with groups of potential buyers in Toronto and in Montreal, and all-wheel drive was not one of the key features they wanted, or were prepared to pay more for.”

He added that “in Quebec, customers know that snow tires will help them drive confidently in winter, while in Toronto, the question of all-wheel drive didn’t even come up. As well, the C-HR AWD available in other markets is powered by a 1.2L 4-cylinder turbo making only 116 hp, which wouldn’t meet the needs of Canadian motorists.”

Makes sense as an answer – well done, Romaric. I would perhaps add that another reason we must make do with front-wheel drive on the C-HR is to avoid a fratricidal war with the RAV4; it’s a dynamic we’ve seen play out within the Nissan family as well, between the Kicks and the Qashqai.

But here’s another curveball question for you, Romaric: Why not a hybrid version here in Canada, since that is offered on the Old Continent?

“For younger motorists, who are the main targets for the C-HR, the price of the transaction is an important factor. We can satisfy the great majority of our customers’ needs with the 2.0L engine, which allows us to maximize value with the C-HR. The C-HR hybrid is sold in Europe starting at 25,000 Euros. I’ll leave it to you to make the conversion to our dollars, and you’ll see that it wouldn’t be competitive on the Canadian market.”

And so I did as I was told and converted: it would be priced at close to $39,000 CAD. It also wouldn’t be eligible for the available government incentives on green vehicles, since it’s not a plug-in hybrid. Romaric is correct, that would make the C-HR hybrid a pretty expensive proposition, pound for pound. On the other hand, I’m willing to bet the North American C-HR will one day get an electrified variant. And that of course fits in with a solemn promise made by the automaker, that all of its models will include at least one electric-powered variant by 2025.

Photo: D.Boshouwers
An electric future for the Toyota C-HR?

As part of our Auto123 long-term review of the 2020 Toyota C-HR, Auto123 winds things up with some apples-to-apples comparisons to see just where this odd du...

As part of our Auto123 long-term review of the 2020 Toyota C-HR, Auto123 turns beauty pageant judge. It’s obvious from the first glance: the C-HR is esthetic...

As part of our Auto123 long-term review of the 2020 Toyota C-HR, today in Part 1 we look at the little guy’s ability to transport people and things. Unusual ... 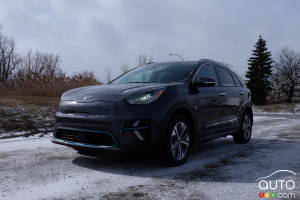 Kia Niro EV Long-Term Review, Part 15: How to...
Review
More from this author