It’s one thing to travel to the wilds of IKEA, but to really get a read on the abilities and faults of our 2021 Subaru Forester, what better way than to take it on the highway and out of town. Road trip!

Our destination was the Saguenay region of Quebec; now, before you pile on about me, a resident of a red zone in the province heading out and potentially contaminating brave citizens of an orange zone known for its beautiful lake and even more beautiful blueberries, I'll point out that I was on a humanitarian mission.

Essential service
My partner comes from Chicoutimi in the Saguenay region, and her 94-year-old father, soon to be 95, lives in a seniors' residence which, although very comfortable, does not prevent her father from finding days very long, Covid-19 having put the kibosh on all group activities.  When you can't even play bean bag toss or get together for a chat while someone tickles the ivories in the common room, it makes for a real feeling of… confinement.

But a visit from a family member can do wonders for lifting the spirits of long-term car home residents. Take it from me, I’ve seen it in action.

Also I should add that it was Valentine's Day weekend. So there were also cupids walking around the hallways.

Now that I've sufficiently patted myself on the back for our good deed, let's get back to the Subaru. With a notebook and a pen at my disposal, I diligently wrote everything down on our little road trip.

Step one involved filling the Forester's 63-litre fuel tank to the brim with regular gasoline. Now, you may be thinking, that’s nice but so what? For comparison, the Honda CR-V and Toyota RAV-4’s tanks have a capacity of 53 and 55 litres, respectively. Post-fill-up, the Forester’s onboard computer told me that I had a range of 650 km ahead of me. From my home west of Montreal to Chicoutimi is 515 km, according to Google, so I was fine. In either of the other two models, I’d likely have had to stop on the way.

More numbers
I’ve been doing this and that in this 2021 Forester since December 22nd. The pandemic has limited the need – and even the opportunities – to drive the vehicle as much as I normally would, and so, the odometer only totaled 1,629 km on the day I set off on my road trip. The on-board computer also told me that to date I’de maintained an average speed of 55 km/h and that my average fuel consumption was 8.8L/100 km.

For a brand-new all-wheel drive vehicle that is just coming off its break-in period, that last figure is neither terrible nor impressive. Subaru officially gives city/highway ratings of 9.0L/100 km and 7.2L/100 km; in comparison, Honda’s figures for its CR-V AWD model are 8.7L/7.4L.

I reset the daily reading to zero and off we went!

Still going up
I mentioned previously the particular sound of the Forester’s boxer engine. During a long trip in cruise mode, it remains discreet, but when passing on the highway, it will not be ignored. Same deal when the vehicle is on a climb while under the control of the cruise control that I set at 117 km/h. So when I traversed the Laurentian Wildlife Reserve, a 8000-sq km behemoth that sits between Quebec City and the Saguenay, things got really noisy.

The 2.5L 4-cylinder grumbled and stamped its feet, but it didn’t throw in the towel. The engine does what it has to do to respect you’re programmed speed. Meanwhile, of course, the instantaneous fuel-consumption indicator careened between 0 and stratospheric scores. It didn’t help my average, let alone my wallet, but, at the same time, it was time to put on our big-boy pants – we were here to climb mountains, so no complaining and especially, no slowing down.

We were lucky, driving under a blindingly blue sky and through a beautiful green and white landscape, plus Highway 175 was on the day a pristine and dry stretch of asphalt, with just traces of slush on the shoulder. Which of course meant there would be no testing the limits of the Forester’s permanent all-wheel drive system, one of its main selling points that we'll talk more about in the next chapter, along with the EyeSight, SI-Drive and X-Mode systems. 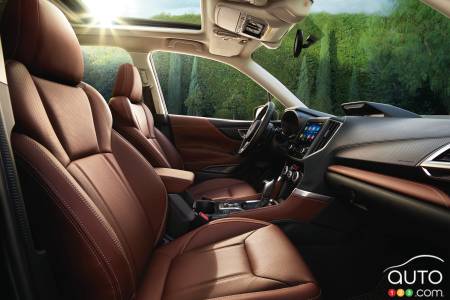 The seats? Nothing to complain about, my back and buttocks concluded at the end of our drive. I should specify that like the finicky princess with her mattress and pea, I have sensitive (not to mention skinny) buttocks. I once had to stop in a Canadian Tire to add a cushion to the seat of an $80,000 BMW that was torturing me. I had no such issue with the Forester's throne even after more than five hours on the road.

My passenger, on the other hand, found that the curvature of the backrest did not fit her small stature enough, preventing her from properly relaxing her lumbar region. I sympathized, of course, while gently pointing out to her that if she had eaten the broccoli her mother had put in front of her on her high-chair tablet, she might have become a basketball player. But I digress.

Suspension-wise, the Forester relies on MacPherson struts up front and a classic tandem double wishbone in the rear. In layman’s terms, this means muscular control of the chassis’ movement. This suspension doesn't digest road imperfections like an expensive Lexus, which delivers a magic carpet-type ride. In this SUV, you hop around. But the Forester has its own way of parrying the big blows, just like a wily boxer.

The roll-control system also allows you to take corners with confidence. That’s helped by the low centre of gravity, for which you can thank the flat engine.

The steering wheel communicates the same feeling of solidity but, on the other hand, don't look for surgical precision. You can shake it a few millimetres in either direction without the steering flinching. But don't let that looseness worry you. Because of its utilitarian nature, the Forester doesn't need a rudder that would incite its driver to slalom. The important thing is, when you're in a parking lot, it's alert enough for tight manoeuvres.

Satisfactory results
Once in Chicoutimi, the indicator showed enough fuel left to cover another 140 km. Since I had travelled exactly 530 km, my range was 670 km, 20 more than the computer had promised before the odyssey. Fuel consumption was 8.5L/100 km, despite all the mountains in the big reserve. Not bad, all in all.

Once I has spent 24 hours puttering around the town, in the freezing cold I should add, I had brought that total back up to 9.1L/100 km. And when I completed the return trip on the Sunday, again under a radiant sky overlooking the string of steep valleys, I actually did even better, ending up with 8.2L/100 km. And the range left after making the drive was 190 km. The whims of computers…

Photo: M.Crépault
Under a blue sky

In short, during this lightning visit to the Saguenay, the Forester acted as a sure ally. I was not allowed to accompany my partner to the residence because of the regulations in force, but she confirmed to me how useful and well-appreciated our little road trip had been.