For this penultimate entry in our long-term review of the 2021 Forester, I'd like to talk about EyeSight, Subaru's proprietary driver assistance system. Its existence has essentially two purposes: to protect us and to reduce our fatigue behind the wheel, which also means to protect us when you think about it.

After slaving away on a bunch of new technologies since 1989, and after testing it right here in Canada in -30 degrees in 2009, Subaru’s engineers let them loose into the world in 2013. And they’ve been tweaking and improving them ever since.

The EyeSight suite is standard on all Subaru models that come with a CVT transmission, which means the vast majority of them (by 2022, even the BRZ coupe will have it).

How does it work?
The heart of the system is two cameras positioned inside the windshield, at the height of the rearview mirror. They work in stereoscopy and in 3D, in the same way that your two eyes work together. Other manufacturers' systems rely mainly on sensors and sonar that surround the vehicle. 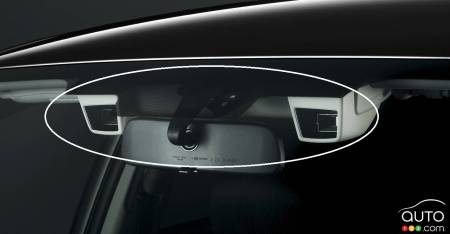 Photo: Subaru
The two cameras near the rearview mirror

To successfully fulfill its mission of keeping vehicle occupants in one piece, EyeSight tries to anticipate the risks of accidents to prevent them or at least lessen their severity.

For example, its “pre-collision braking” feature has cameras monitor the vehicle in front of yours. If the software thinks you haven't seen it, the system applies pre-collision braking without asking you. The result is the thrill of your life when the Forester slams on the brakes without warning.

Once the emotional shock wears off, you have two choices: you can keep a greater distance from the person in front of you or you can deactivate the gizmo that you feel is too intrusive by pushing the button on the dome light designed for this purpose.

For my girlfriend, the choice was clear: “You drive too close to the others. You just have to back off of them, and then you won't have any intrusions from the system! " 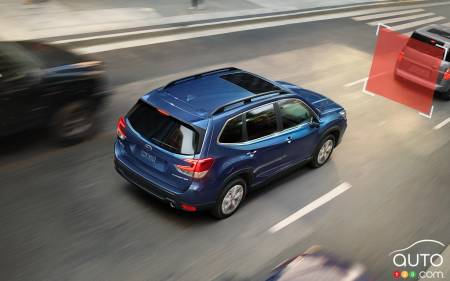 A white cane
Like other similar systems flooding the industry today (as the welcome democratization of technology continues), EyeSight detects white lines on the road surface to keep the vehicle in the centre of its lane. You can even take your hands off the wheel to fish out the last bits stuck in the bottom of your bag of chips, for example.

Of course, if you continue to ignore the steering wheel, it doesn't like it. After about 30 seconds, you'll get warning lights to grab hold again. You don't even have to grip it tightly. Just let a palm rest on the wheel and the system feels less lonely. It continues its work. It's not really you giving feedback to the steering wheel, it's the system that does that.

EyeSight is advanced enough to take the vehicle through a sharp turn; that’s a feat that was impossible a decade ago when these systems were in their infancy.

Basically, you’re benefiting here from semi-autonomous driving, a natural evolution of basic guidance assistance. Strangely, the Subaru Canada website doesn't go into detail about this particular skill of the EyeSight system. Probably on purpose. They don't want drivers to let their guard down, as has happened to some Tesla owners who, relying on their vehicle's autopilot (arguably the most advanced in the industry right now), took the opportunity to take a nap or watch a movie. Unfortunately, a few of them will never know how the movie ended... 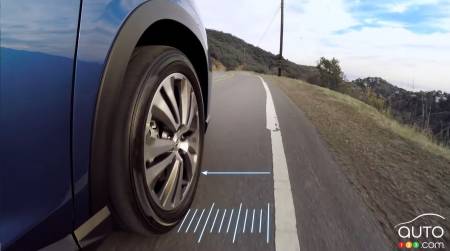 Moreover, thanks to its high positioning, EyeSight is less likely to be bothered much by the presence of slush and other impediments than rival systems. This does not make it totally weatherproof. During my trip to the Saguenay, it stopped working three or four times. Dirt, snow, ice, or other unwanted gunk hindered it enough that an indicator light told me I could no longer rely on EyeSight.

To reduce the chances of this happening, Subaru fitted the right wiper with a nozzle that squirts liquid to keep the glass clean in front of the cameras. It’s these kinds of improvements that Subaru makes to its system as we – its willing guinea pigs – drive their cars around, testing them in real-world use.

And, in fact, every time the thing went on strike because of a dirty windshield, the system came back on after a few minutes without me having to stop at the side of the road and take the snowbrush to anything.

That said, when a blizzard hits, you just have to be patient. If big flakes are obstructing your own vision, you can be sure that the EyeSight's vision will be obstructed as well.

My favourite
With EyeSight comes adaptive cruise control. The vehicle brakes and accelerates on its own to maintain the set speed. Very practical. Although, when EyeSight conks out, for the aforementioned reasons, this bit of smart tech conks out along with it.

Fortunately, with the Forester, you can just activate the classic, "non-intelligent" cruise control. You just have to find the page in the voluminous owner's manual that tells you how. There's also a switch on the ceiling that mutes the lane departure warning. I admit it's tempting to push it in when the beeps keep going off when you happen to flirt with the median strip to avoid a pothole or a cyclist.

But aside from the occasional over-reach of the system’s functions, I think EyeSight is an asset - as are its equivalents made by competing manufacturers. I’m sure that foremost in the minds of tech designers is to find ways to protect drivers against all the modern distractions that beset them when driving, our smartphones being culprit number-one of course.

EyeSight proves to be a welcome technological buoy. But even with it watching my back, I would never think of venturing out on the road without first learning to swim.

As part of our long-term review of the 2021 Subaru Forester, Auto123 attempts to get a proper understanding of the vehicle’s character via a road trip. Here’...