The Volvo XC90 came to us more or less in its current form for the 2016 model year. Back then, it was an eye-opener in terms of style and substance. It looked unlike any Volvo that had ever come before it, thanks in no small part to its modern front fascia, itself highlighted by the “Thor’s Hammer” headlights. “Thor’s Hammer”, of course, refers to the LED DRLs shaped to look like the weapon of the famous Norse God/Marvel superhero. The XC90 is Swedish, after all. The model ushered in a new era of design at Volvo, and every other of its models has since followed suit.

For 2021, Volvo has given the XC90 a slight makeover, as well as some new nomenclature that’s in keeping with the rest of the lineup. The new styling doesn’t extend much past an updated grille and some new paint and wheel choices, but that’s OK by me because the XC90’s exterior design has aged incredibly well and at this juncture, a few tweaks really were all that was required.

The stance is right on, the chrome detailing ‘round the side windows, on the lower doors and framing the front air intakes is just the perfect amount of the stuff. Plus you’ve still got those great headlights and tall taillights, which have been a Volvo staple for decades. It’s not the most exciting vehicle to look at but it is incredibly, almost achingly handsome and that will be just right got most buyers at this level. 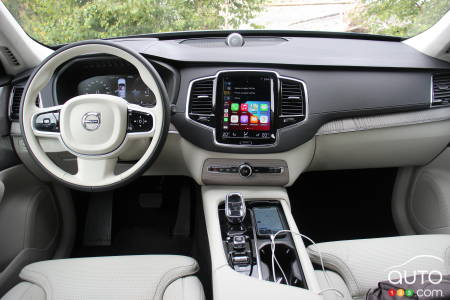 The interior
Inside it’s mostly more of the same – great detailing with open-pore wood inserts (I could run my hand over that for days), just the right amount of aluminum trim, Orrefors crystal shifter and sumptuous leather seating.

Like Volvo always seems to have, the seating is so comfortable that you’d be better off calling them chairs than seats. I’m still not sure about the way the thigh extender works, though; there’s too much of a gap left between the thigh extension and the bottom seat cushion, too readily felt when extended. The massage feature did wonders for my recently injured back, though. It was on pretty much whenever I was in the car, and I really think it helped.

There is just one notable issue I have with the interior, however, though it’s kind of an unfair one. Allow me to explain.

The XC90 gets an all-digital gauge cluster as well as a vertical 9-inch central infotainment display, half of which gets taken up by your Apple CarPlay if you happen to be using the app. Now, back in 2016 when this debuted, it was the bee’s knees. Ultra futuristic and something that few other manufacturers were doing at the time.

Now, though, the rest of the world has caught up, infotainment displays have become even smoother and better-looking and digital gauge clusters can often be customized six ways from Sunday. That is not the case in the XC90 and it looks a little old-fashioned as a result. Such is the pace of progress that digital displays don’t age as well as analogue ones once did. 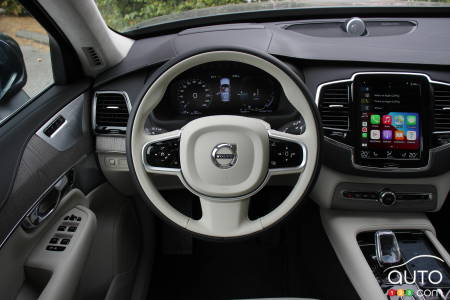 Changing the drive modes doesn’t do much to the gauge cluster and the system itself is a little slow-witted and not as intuitive as some of the competition. It also requires drivers to make use of a very text-heavy menu to manipulate the various driver aids – lane keep assist, blind spot system, etc. – and that gets a little tiresome.

Now, much of this will be moot once Android Automotive takes hold over at Volvo but for now, with this particular XC90, I found the infotainment system to be lacking.

Less so the sound system to which it’s attached, however. My tester had the $3,750 Bowers & Wilkins premium audio and the way it can make even compressed streaming music sound as crisp and clear as it does is a feat. Plus, the metal speaker grilles themselves look absolutely gorgeous. 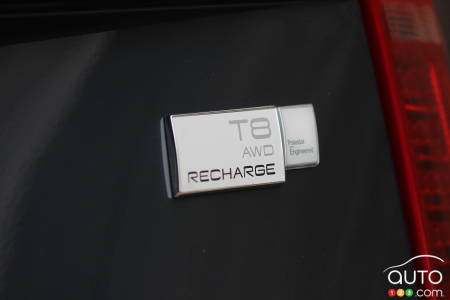 Recharge means… what?
The nomenclature change is a slightly bigger deal because you have to pay a little attention to get it right.

My tester is officially called the “XC90 Recharge T8 Inscription” (and not the “Inscription Expression” – that’s a lower trim; it’s easy to get mixed up there) and that Recharge bit is important because it denotes this XC90 as a plug-in hybrid – and only a plug-in hybrid. Except that in the case of the XC40 Recharge, the designation refers to an all-electric powertrain. Anyways, unlike that smaller model, the XC90 Recharge (and any other Volvo so named) is not a full battery-electric vehicle.

So, with the XC90 you get an EV motor – it sits on the rear axle – that should provide you with about 30 km of full-EV driving as well as AWD. If your daily commute is short enough and you can plug in wherever you happen to end up, you should be able to spend most of your time in EV mode, if you believe the claimed figures. We’ll soon know whether you should or not.

That EV motor is just one of three “bonuses” the 2.0L 4-cylinder gas engine gets to improve its performance and efficiency; it also has a turbocharger and supercharger. The supercharger boosts power at lower revs, while the turbocharger then takes over as exhaust gasses build higher up in the rev range. In most instances the EV motor is there in the background, helping things along. Combined power is rated at 400 hp and 472 lb-ft of torque, assuming it’s all hands on deck and all the various motive forces are combining to propel you forward.

That, of course, depends on what drive mode you have it in, because each of those modes – Pure, Hybrid, Power, Save, AWD, Off Road, Individual – play with the powertrain in different ways. Since the EV motor is required for AWD progress, since there’s no drivetrain from the engine to the rear wheels (which is great for interior space), both it and the gas motor have to operate when AWD is selected. Save mode relies on the gas engine to keep your EV charge at a certain level, and Hybrid kind of shuffles things around depending on what’s required according to driver inputs. 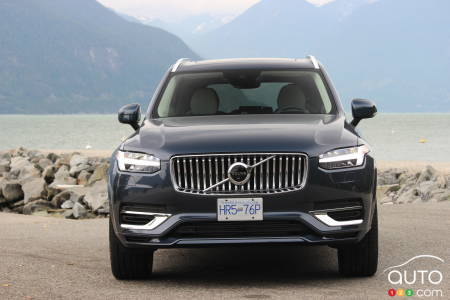 That’s all fine but the one thing that the drive modes can’t disguise or modify is the gas engine’s attitude. Which, it has to be said, is a little on the coarse side. Granted, it’s a small engine that has to haul around a bunch of weight – almost 2,000 kg of it – so it does have to work hard, but small, turbo’d engines are increasingly the norm these days even in large SUVs like this. To have a luxury car sound like this under hard acceleration is a little uncouth.

Thing is, it’s not as if all that noise is for naught; forward progress is swift, the quick-shifting transmission working well in concert with the myriad of power sources to provide the kind of forward progress you’d expect from a luxury SUV or crossover. It’s brisk enough, and rarely left me wanting when it came time for fast manoeuvres like passing on the freeway.

However, while it is perfectly becoming of a luxury SUV, it’s not quite on the level of the top-spec vehicles from other manufacturers. The BMW X5 M50i – which starts at a little more than my tester’s $88,050 base price – is much faster and gets its power from a deep-chested V8. At the same time, though, the XC90 is actually a little more powerful than the BMW’s xDrive45e plug-in version, although that starts at a little less than the XC90 does. The XC90 T8 also makes more power than does the Mercedes-Benz GLE 53 AMG but again, that’s not really the flagship of its maker’s lineup, and it could be argued that the XC90 – especially in T8 Recharge form – is 100 per cent flagship when it comes to rating Volvo’s entire lineup.

So it’s not really a dragstrip demon, this, but when it comes to PHEVs, their efficiency is generally that matters most. 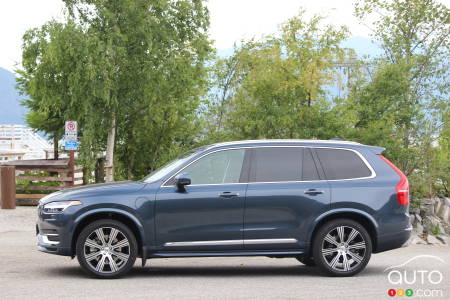 To that end, I managed to squeeze about 24 km out of a single charge of the XC90, which falls a little short of what Volvo claims but not so much that I can penalize it too heavily. Plus, the 8.9L/100 km I saw throughout my test is a fine figure, and one that would probably improve if you worked a typical 40-hour work week with average commute times. If you do this, chances are you’re always going to be close to a charge spot with your XC90 and there will be plenty of EV motoring in your future.

Aside from the powertrain, there’s the ride which, on my tester, is bolstered by four-corner self-levelling air suspension ($2,350) that does well to provide the kind of ride the sumptuous interior suggests it should. Most every day-to-day bump is metered out well, and a lot of the biggest jolts I received during my test probably had something to do with the XXL 21-inch wheels I had. Those are a $1,000 option and if you stick with the 20-inchers that come standard, you’ll likely get a better ride still.

The lower profile tires with stiffer sidewalls do well to improve the handling, however. For all the work the powertrain has to do to keep up with the weight, the chassis takes it all in stride. The turn-in is incredibly responsive for such a large luxury vehicle and that air suspension does well to keep the body in check and allow the chassis to better ensure it gets as much energy transferred through the tires’ contact patches and to the road as possible. The result is a ton of grip from the 275-section tires and an incredibly confidence-inspiring attitude in adverse conditions. Which, indeed, is what Volvos have been about for years. And years. And…years.

Only now, with the XC90, they’ve managed to add a luxury cruiser to their stable as well. It may not be the most powerful in the segment, but it’s not the least, and there’s just something about it – an almost intangible quality – that makes you feel like “this is the vehicle I want to be in when the going gets tough – and it’s also the one I’m proud to show up for my tee time in.” 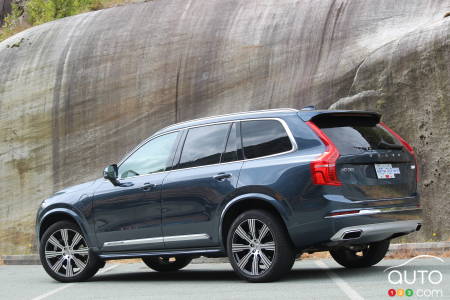 Great looks both inside and out
Interior materials
Ride and handling 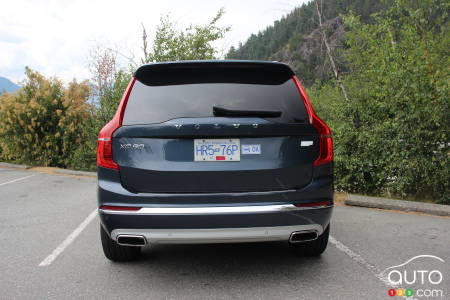 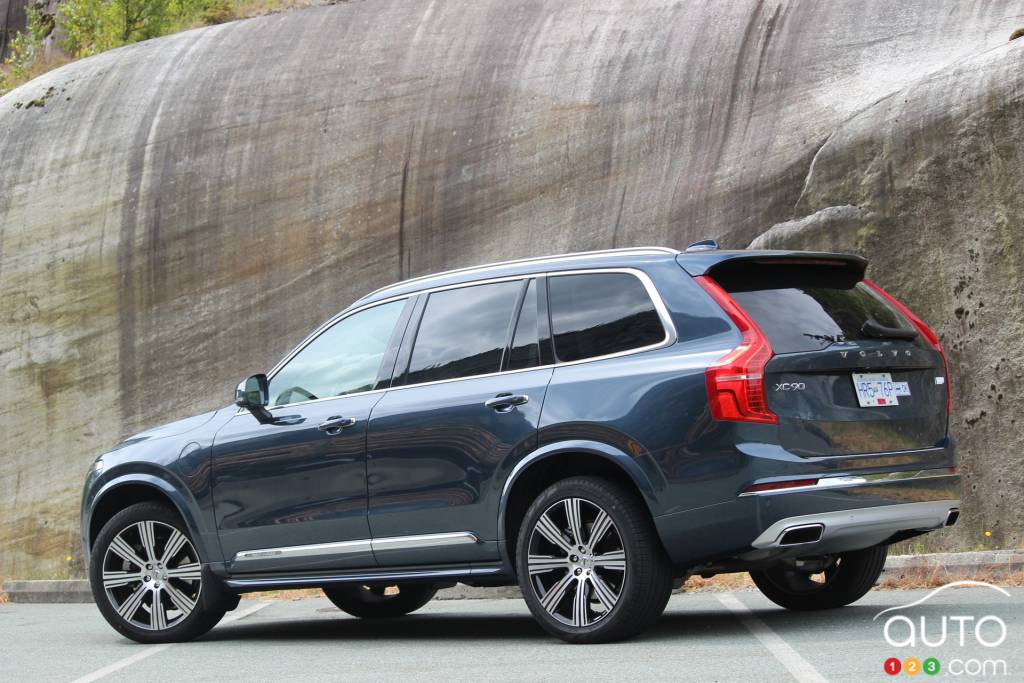 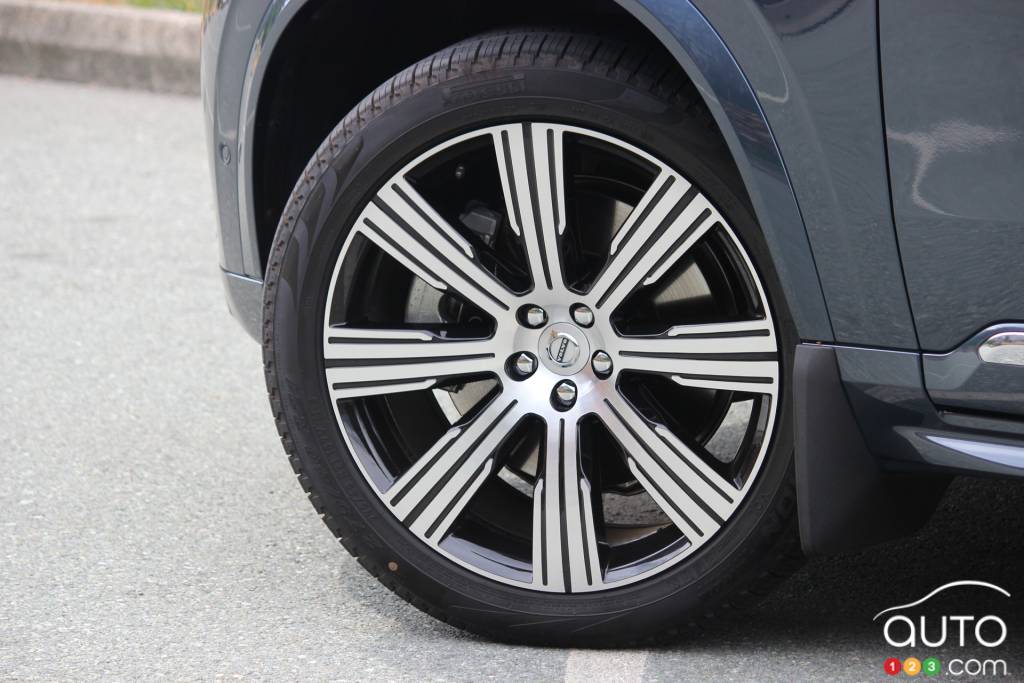 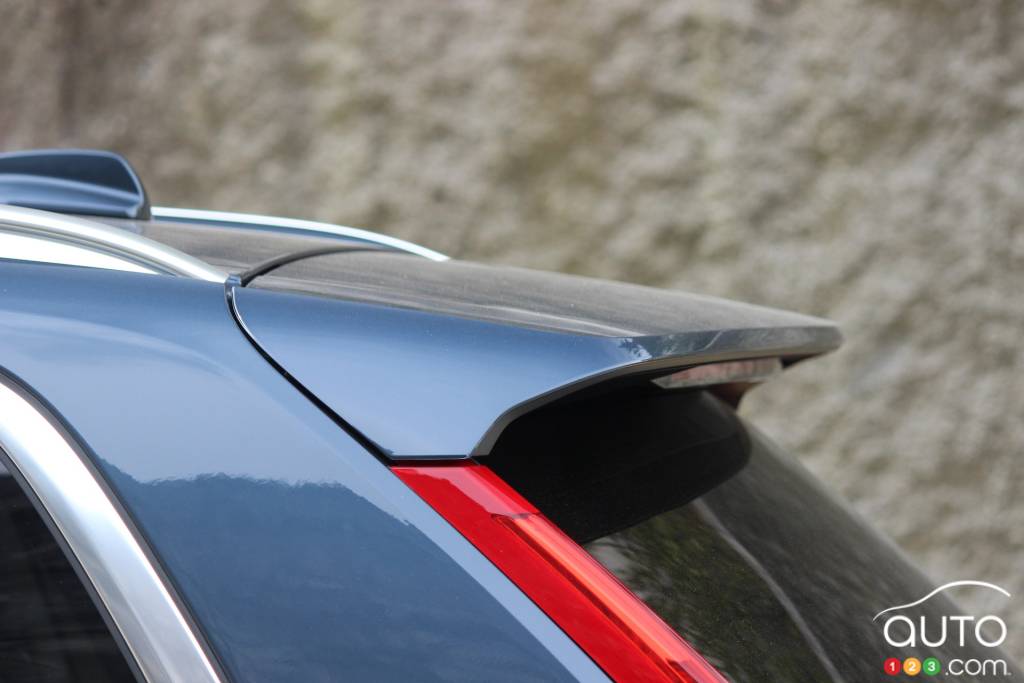 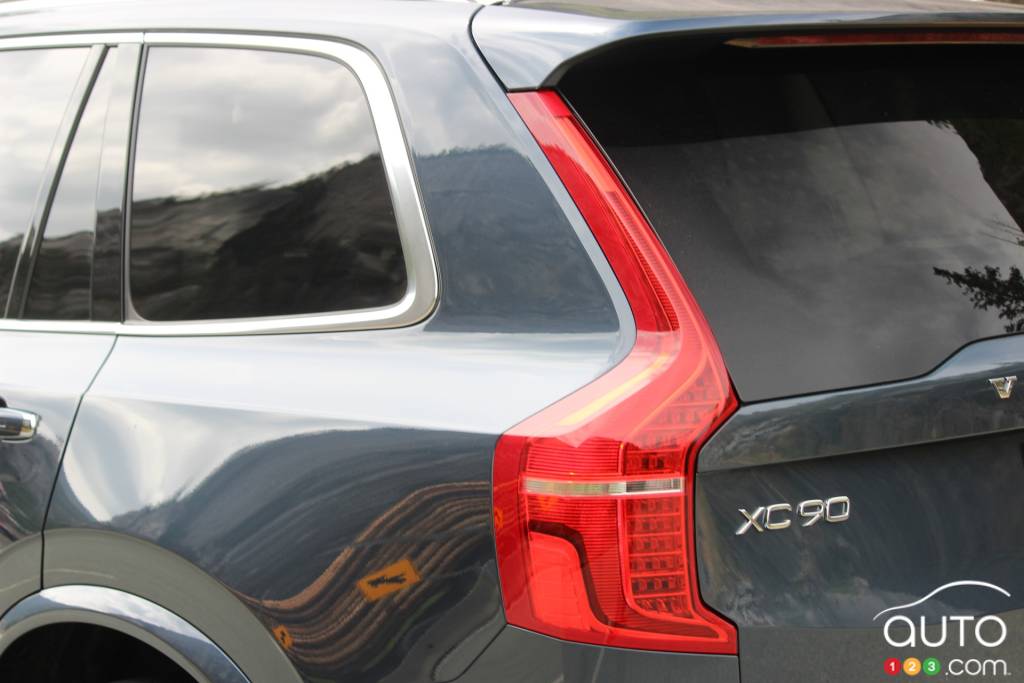 Volvo Canada has shared pricing for the C40 Recharge coming in 2022, and things couldn’t be simpler: $72,600 gets you in the door for the one available versi...

Volvo envisions a future where your windshield could be a huge display screen. Specifically, the Swedish company has invested in Spectralics, an emerging tec...

A man in St. Louis, Missouri has just passed the one-million-mile mark with his 1991 Volvo 740. And the car soldiers on, because it’s been well maintained an...