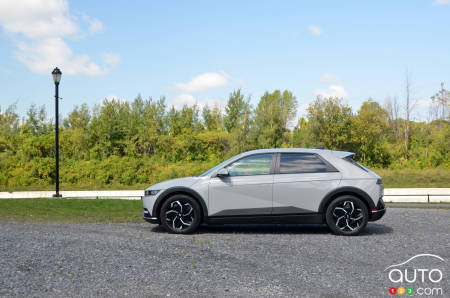 •    This version costs less but does not offer four-wheel drive.

•    It also has a 'standard' range, which is less than the long-range models.

You've probably already seen it on the streets of major Canadian cities or even in smaller urban and rural areas. EVs are increasingly no longer an exclusively urban affair after all. Besides, the Ioniq 5 is popular - the very first purely electric vehicle developed by Hyundai has, in just over two years, attracted praise, attention and buyers.

Let’s not forget it's on the list of vehicles eligible for government EV incentives, which makes it even more attractive.

Even with the discounts, though, an EV like this is not exactly cheap. This model starts at $46,999. But that doesn't mean it will sell for anywhere close to that to many buyers. 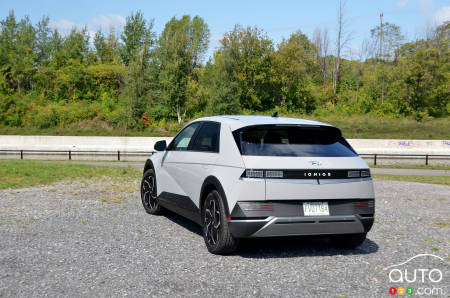 In Canada, many consumers have understandably opted for the dressier trims, which raises the price tag to a pretty steep level for an electric crossover that doesn't even have a rear window wiper. That detail hinders rear visibility when it's raining and can downright eliminate it in winter in certain situations.

But let's put aside that issue, which has already been the subject of much discussion since the model's introduction. Instead, we focus on this recent test of the less-expensive Ioniq 5.

Entry level... or almost!
This second tier in the lineup is called Preferred with Standard Range, which is slightly underpowered compared to the 320-hp four-wheel-drive model. But given the inflation of recent months, car buyers are increasingly basing their decision on price more than any other factor, including power.

At $48,824 (including preparation fees), the Hyundai Ioniq 5 Preferred with standard range is not exactly an affordable car in the mold of the Mitsubishi Mirage. Yes, you can fill up at home via your electric plug and you’ll avoid gasoline bills, but you still have to be able to absorb the monthly payment for the vehicle. 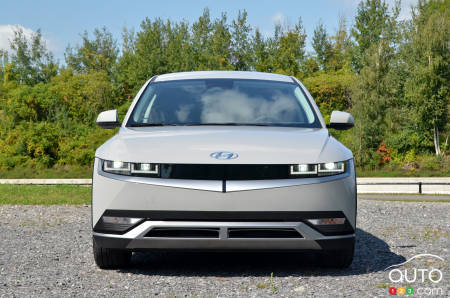 Less powerful and...
Where this Ioniq 5 trim might scare off some Canadian motorists is in terms of its driveability in wet and winter conditions. Indeed, like a number of other EVs, for instance Kia's EV6 and Ford Mustang’S Mach-E, the Ioniq 5 Preferred with standard range leaves the factory with only one motor, positioned on the rear axle. As a result, the crossover is a good old-fashioned RWD, a configuration that's not necessarily ideal for driving through a Canadian snowstorm.

This powertrain delivers less output than the four-wheel-drive Ioniq 5. While maximum torque (258 lb-ft) is the same as in the top-of-the-line extended-range model, the output is 168 hp, compared to 225 in the mid-level model. 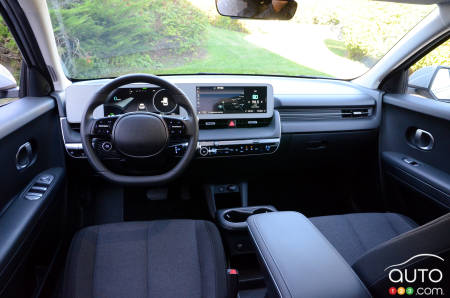 You'd think that this disadvantage would be reflected in the range, and it is. But with 354 km to offer, the SUV gives enough for urban dwellers who don't need AWD and don't need to go 500 km between charges.

While it's true that four-wheel drive is better than two with our Canadian weather conditions, it's worth mentioning that the multiple safety features - including traction control and stability control - take care of instilling confidence.

I admit it, I tried my luck at testing that RWD’s grip in a safe place on a dry surface. There the Ioniq 5 can generate smoke from its tires. But on rainy ground, the car spun out - with no consequences for the car or the driver, I’m happy to report. I'd have to try again to get acclimated to the vehicle. 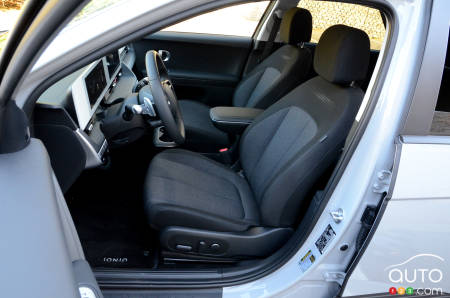 I had occasion to drive an AWD version of the Ioniq 5 last winter and found there was more than enough power for the size and weight of the vehicle. With half the horsepower under the right foot, this Ioniq 5 has far less straight-line gumption, no doubt about it! But for the vast majority of motorists, 168 hp and 258 lb-ft of peak torque are just fine.

It's true that Sport mode spices up accelerations and passing manoeuvres, but it's nothing like the 4WD model or some of the other electric cars out there. On the other hand, for urban driving, the stripped-down Ioniq 5 is equal to the task, even if on occasion, turns taken too quickly leave the rear end slipping a bit – another proof of its particular configuration. 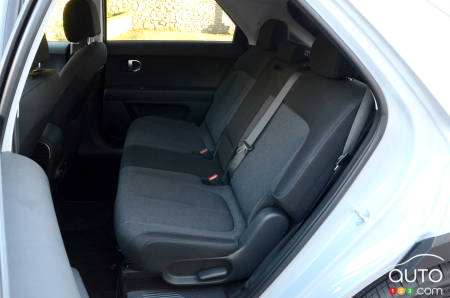 A comfortable vehicle
Even on craggy road surfaces, this Ioniq 5 proved to be surprisingly smooth and comfortable. And even though its rims are 20 inches in diameter, the Korean utility car remained supple on uneven surfaces.

It's true that the model’s close cousin, the Genesis GV60, did a better job in this regard. That luxury model benefits from an adaptive suspension, which isn’t the case here. You can also hear some body noise and road echoes through the wheel arches, while those hard plastic door panels make the passenger's seatbelt constantly bang on the wall, a detail that should be corrected in my opinion. Otherwise, the Ioniq 5 is a very quiet vehicle thanks to its electric motor. 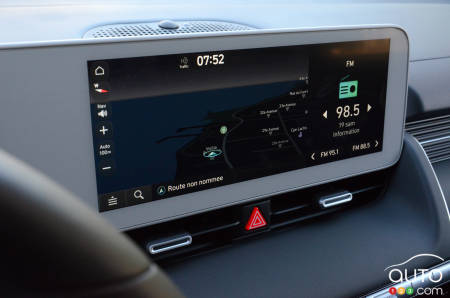 Fast charging
The tech aspect of the Ioniq 5 is obvious before you even get in it, with the door handles deploying when you approach (with smart key in pocket). Then there’s the touchscreen next to the driver’s data display screen, backed by a third touchscreen for the clime controls. As for the gear shifter, it’s easy to use.

We did not cover any great distances with this Ioniq 5, especially not in one go. With a range of just over 350 km, the Ioniq 5 is not the best-equipped electric vehicle for long road trips in areas without fast charging stations. If you do find one of those, though, you can add 80 percent charge in about 20 minutes. Mind you, the vast majority of users will simply plug the car into the home or even work charging station.

The final word
I still believe many consumers will opt for the four-wheel drive model, even if it means a longer wait before taking delivery of their new Ioniq 5. But for urban drivers who aren't scared off by the model's (slightly) diminished capabilities in winter, and aren’t turned off by the hard plastic surfaces and cloth upholstery inside, this more affordable version could very well play the role of practical, electric vehicle.

It great looks
The general comfort
The ergonomics of the dashboard

The all-new, all-electric Hyundai Ioniq 5 will hit the North American market in the fall of 2021; yesterday Hyundai gave the EV, which depending on battery p...