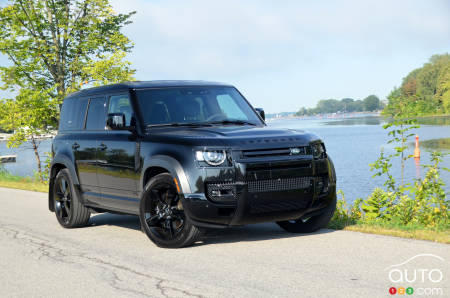 •    This P525 V8 version represents the ultimate in excess under the Land Rover umbrella.

•    This Defender can handle rough terrain, while on the road or in the city, it even manages to put smile on driver's face.

The Defender, which we were able to discover - rediscover, in fact - last year, is the model most emblematic of the Land Rover brand. It's true that the manufacturer already has some fairly unique and memorable models, like the Range Rover for example, or the more urban Evoque - but the Defender is in a class of its own.

For my part, I will always remember the day, several years ago, when a Moroccan Berber came to pick me and my better half up in a brand-new classic Land Rover Defender 110. From that day, my bucket list included driving one of these puncture-proof 4x4s, which are a bit more common outside of North America than inside.

I'm still waiting to get behind the wheel of one of those vintage editions. But I have had occasion to drive a 110 variant of the "new" Defender and even the less-widespread Defender 90, which will never be a huge seller due to its limited interior volume.

But now, Land Rover has also been offering the Defender V8 for a few months. This configuration is only available with the two shorter Defender models (90 and 110). Because the new Defender 130 is a more family-oriented vehicle with a third row of seats, there are no apparent plans to give it the big engine.

How much does a Defender V8 cost?
Right out of the box, the Defender V8 comes with a hefty base price of $128,100. Although it is possible to equip the vehicle with a multitude of options that’ll drive the price up faster than the 110 can climb a steep hill, our tester was not actually packed with optional packages sure to inflate the price to an absurd level (and impress journalists along the way). 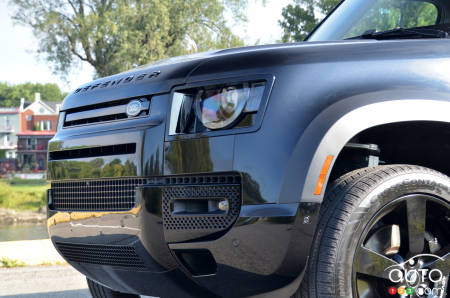 Honorable mention to this Country Accessory Package that adds those wide fenders at all four corners, the trunk divider that keeps gear in place even during hard braking, a portable flushing system (!), shiny rear sill plates and wheel arch protection.

If nothing else, the fenders and the trunk divider alone remind us of the British origins of this legendary 4x4. All that's missing is a British license plate and you'd think you were on the other side of the Atlantic.

Driving a supercharged V8
What sets this version apart from the rest of the Defender lineup, which is also available with a turbocharged 4-cylinder or turbocharged inline 6-cylinder, is its supercharged V8 engine that produces 518 hp and an equally generous 461 lb-ft of torque. The engine is mated to an 8-speed automatic transmission - the same as in every other vehicle from the brand. The four-wheel drive system is very sophisticated, with Terrain Response offering an additional mode called Dynamic.

Unsurprisingly, this sportier setting gives the Defender V8 a lot more oomph when it's time to do the 0-100 km/h trick as lickety-split as possible. 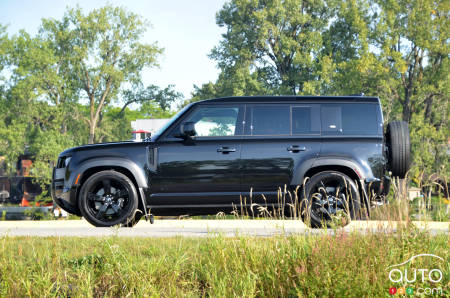 The sound of this boxy SUV is majestic - a little less throaty than the Wrangler 392's HEMI V8, but certainly more vocal than the twin-turbocharged V8 found under the hood of the G63, a direct rival, as it happens. The steering is relatively precise and it’s heavy (especially in Dynamic mode).

But no matter, you never get tired of driving this vehicle. In fact, compared to the Jeep Wrangler 392, which becomes annoying over time with its rather stiff suspension and its exhaust system that roars into the cabin, the Defender V8 is more restrained, notably because of the absence of a removable roof, which also means that it's possible to have a conversation even at highway speeds.

Note that the lack of a removable roof also means there’s no need for protective bars in the cabin like in the Jeep Wrangler or the Ford Bronco. 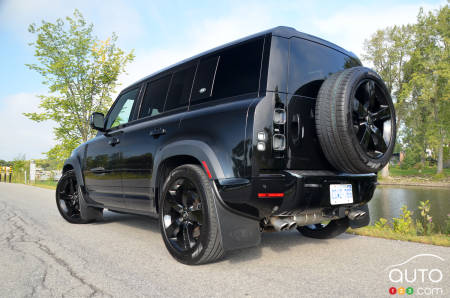 In the city, every acceleration is accompanied by the typical whistling sound of a supercharger, a detail that adds to the many pleasures of this big British 4x4. On the highway, the Defender's refrigerator shape and heavier weight make it feel like you're pushing a lot of air when you're flirting with 120 km/h. Being fridge-like also makes the Defender sensitive to crosswinds.

The good news is that the Defender V8 is well-planted on the highway, and its heavy weight makes it harder for unexpected gusts to push it out of the way. Short of getting caught in a hurricane, you’ll be fine.

On-road or off-road?
The Defender V8 has big 22-inch feet shod in Continental summer/four-season tires, a format that admittedly isn't as well-cut as off-road tires. On the other hand, most buyers of the Defender V8 will likely never venture off the beaten path. The big wheels are thus perfect for improving handling on the road.

Speaking of handling, the suspension has been adjusted to be firmer than usual and less generous when riding over tougher obstacles. As a result, the V8 is not as “flexible” or forgiving as other Defenders. 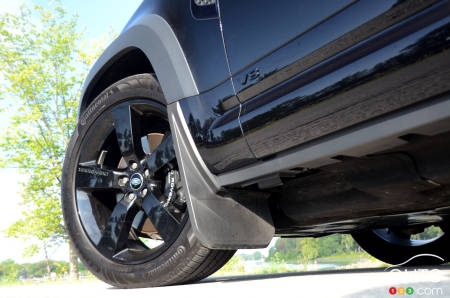 Does that mean it's less adept at off-roading? With those street tires, certainly. But with a smaller-diameter set of rims and more aggressive treads for off-roading, the Defender V8 would probably have no trouble getting out of trouble.

With numerous configurations for all types of terrain, an air suspension that lifts the body to a fairly impressive height, a low-range transfer case and an electronic limited-slip differential, the big Defender is primed for adventure, even though it’s more likely to glide along upscale boulevards with its black dress on a black background.

The final word
Right now, big cars like this Land Rover Defender V8 are getting bad press. Labeled the “big polluters” of the industry, these old-school 4x4s - even if they're all up to date with the latest technology - are indeed heavy. And they are indeed gas-guzzlers - I averaged 15.2L/100 km during my week-long test drive, which is 0.4L more than the average calculated by Natural Resources Canada, which really isn't bad under the circumstances. And they're, well, difficult to park.

As a large, “traditional” luxury SUV, the Land Rover Defender 110 P525 V8 is a pretty unique vehicle, at least for its time. Ten years from now, this kind of madness on wheels will be harder and harder to find.

Despite its slightly reduced off-road capabilities, it can venture on rough ground, while on the road or in the city, this Defender variant even manages to put a smile on its driver's face. It happened to me anyway! 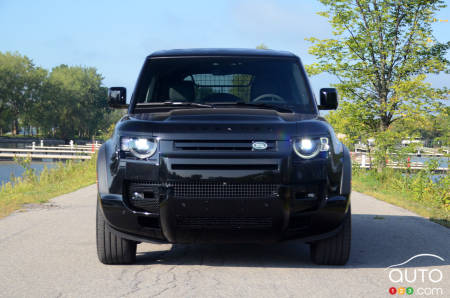 The fuel consumption
The reduced off-road capabilities (compared to other versions of the Defender)
The price (!) 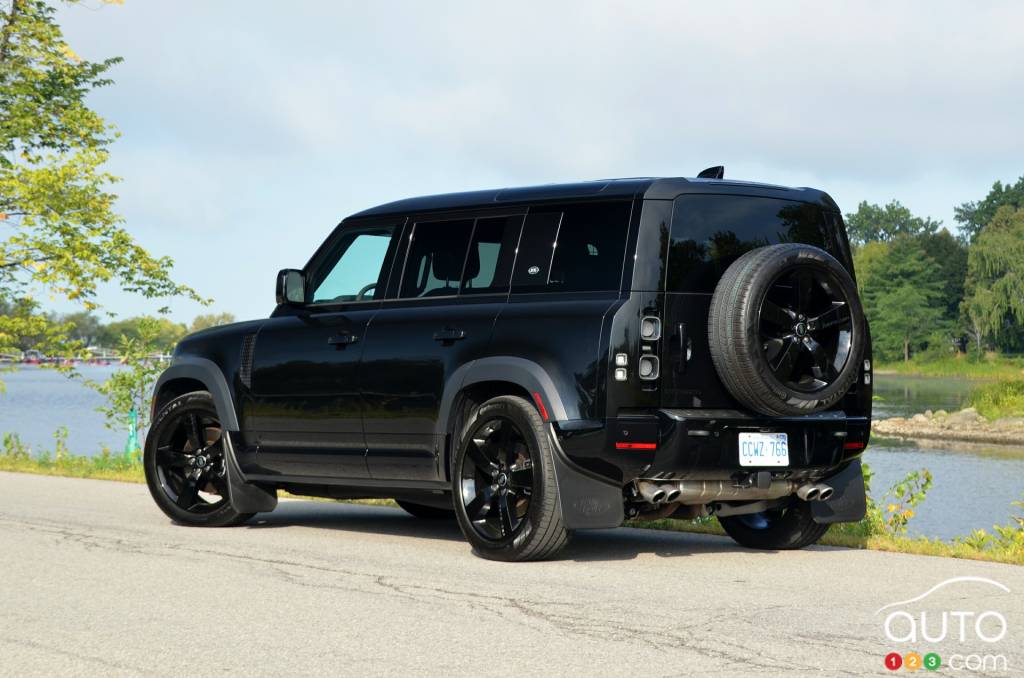 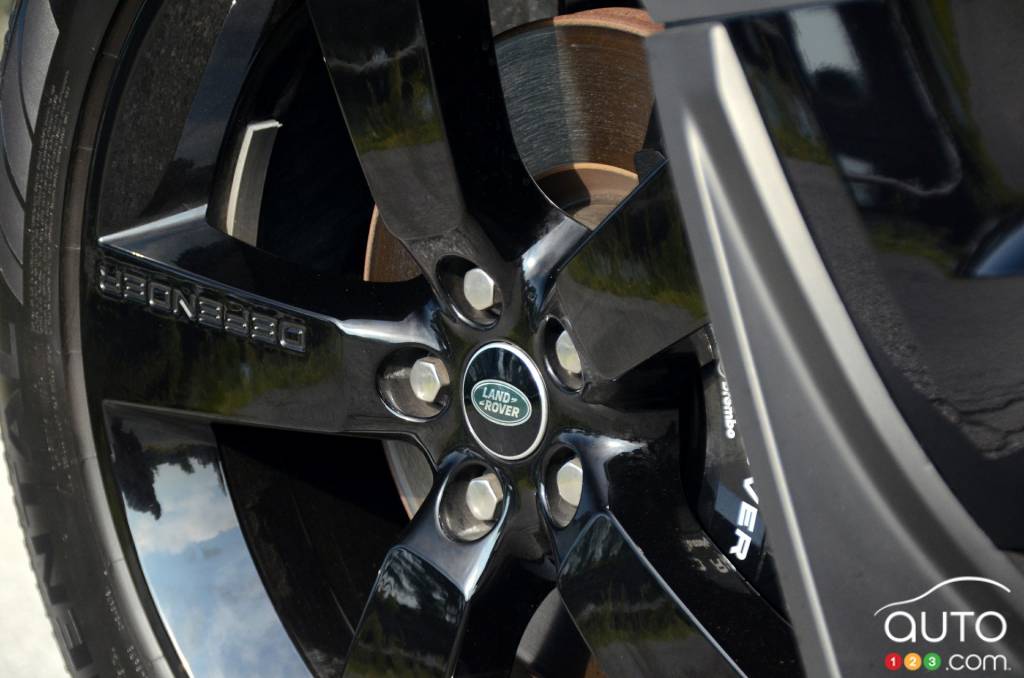 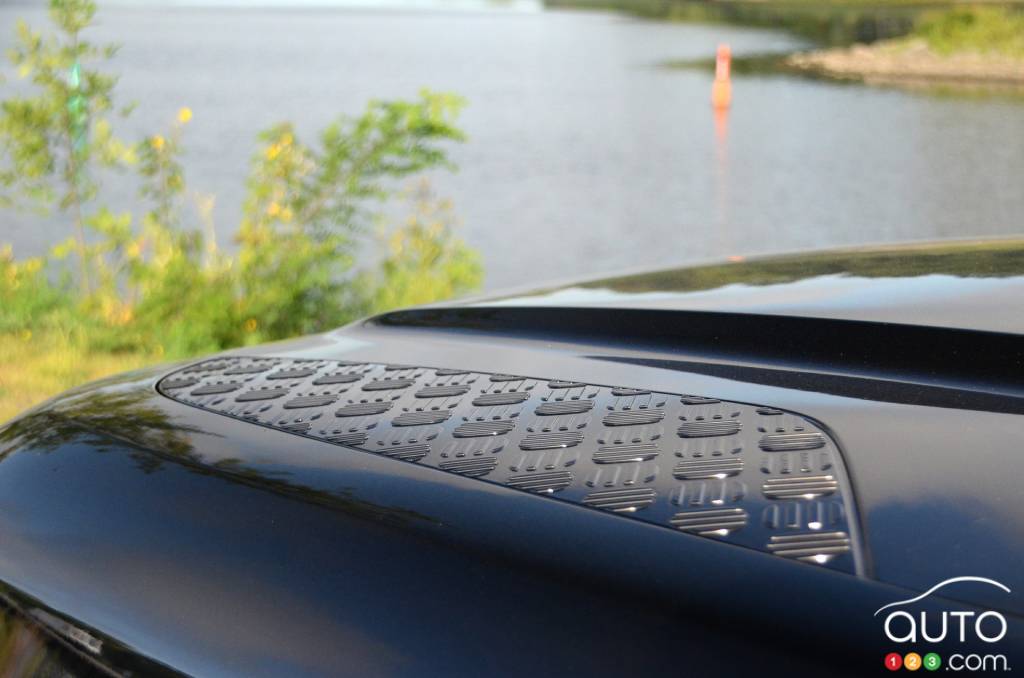 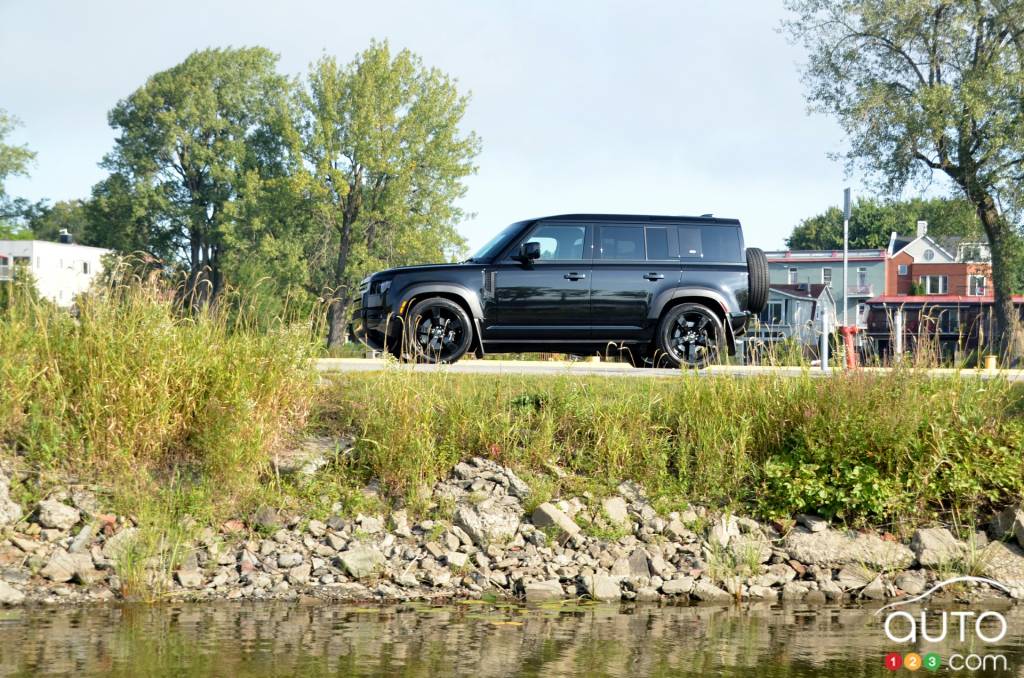