•    The hybrid powertrain adds weight to a model known for its lightweight agility, but it still offers a dynamic drive.

•    Owners disciplined enough to plug in every night will be rewarded with very low fuel consumption.

Minis are still fun, let’s make that clear. Over the years the brand’s models have certainly gotten bigger, and they’re not exactly found in the categories of ‘cheap cars’ anymore. Still, they deliver a driving experience that is largely unique and uniquely pleasure.

A few years ago we saw the first all-electric Mini debut on the market. Unsurprisingly, the Cooper SE was fine in the fun department, the instant torque of an EV doing no harm to the level of enjoyment it delivered to those at the wheel.

But this 2022 Cooper SE Countryman is a different kettle of fish. Because the kettle contains not just an electric motor and battery pack, like the Cooper SE, and not just a combustion engine and attendant parts, like the regular Mini Countryman. It houses both. And so it is 244 kg heavier than that regular Countryman.

This means that while it absolutely looks like a Mini, with no big design departures save the big E logos on the sides and back of the car, the drive it delivers has to be affected in some way. That’s probably OK if it’s not majorly different, but if it is, the question becomes this: What’s the point of a sluggish, heavy Mini?

So as mentioned, the look of the 2022 Mini Countryman is true to what we know and love about the brand’s cars. It’s kind of block-y and it’s got rounded parts here and there, but it all comes together nicely, if you like that kind of look. It’s certainly different and distinctive. 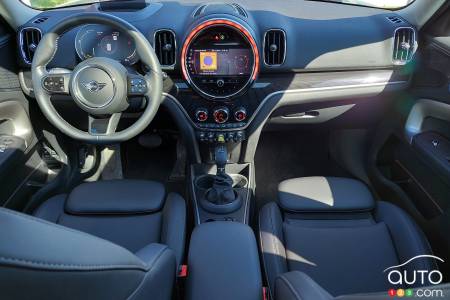 The interior is distinct as well, meaning you know you’re in a Mini from the moment you sit down, or even when you look in at it from the outside! I defy anyone not to get a kick out of those switches lined up in a row on the lower console, or enjoy the round display screens. The best kind of futuristic design is retro-futuristic design, if you ask me.

In the application, use of the infotainment system and driver data is all relatively straightforward, no complains there really. It’s all a little gamer-oriented, but if you’re driving a Mini you’re not closed to that I guess. 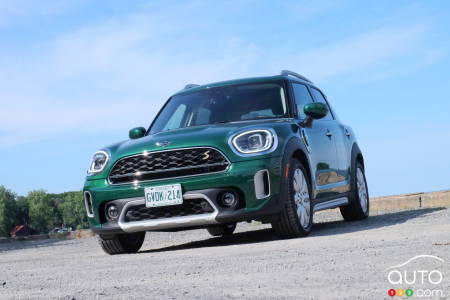 On the road
All of the gadgetry and design fun is well and good, but this is where you get to the heart of the question with this plug-in Mini, of course. First off, know that you can drive, if there’s sufficient charge and you’re not at illegal highway speed, in all-electric mode to keep the engine dormant. That would be MAX eDRIVE. Stick with that and you’ll see your range melt away like a snowman in March (February, with climate change factored in).

Officially that range is 29 km, but that depends on the route being just so and your behaviour being angelic, and in any case, as with most hybrid-powertrain models, in the end most owners will simply let the powertrain do the work of deciding when to use what motor. Their job is to have the self-discipline to plug the thing in every night. If they do, most commutes of reasonable length (and below a certain speed) won’t involve bringing the ICE into use. 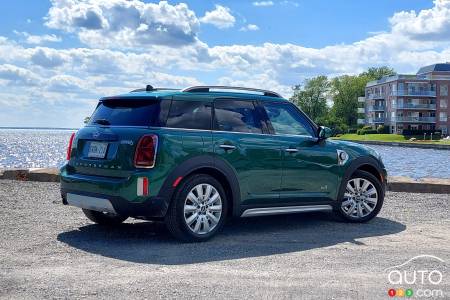 Range-schmange, you’re probably saying. How does the thing drive? Well, it drives via a 1.5L turbocharged 3-cylinder engine, along with the electric motor. The ICE gives 134 hp and 162 lb-ft of torque, while the electric motor (powered by a 10-kWh battery) throws in another 87 hp and 122 lb-ft of torque. Thanks to the presence of the latter, acceleration off the line is very lively, weight issues or no.

After that, the smart positioning of the battery pack (under the back seats) gives the car a good weight distribution for rear-wheel grip – perfect since this Mini is RWD when you’re using that all-electric mode. And even, low weight distribution helps maximize agility and cornering ability. You do sit higher than in a Cooper, but body roll is minimal, and most importantly, it’s predictable.

Otherwise both the steering and suspension are pleasingly firm but won’t make your bad back (I have one of those) worse unless you overdo it on rough road surfaces. 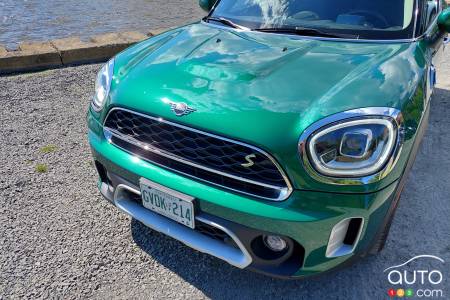 Quirky, not quite fully practical for families, a little hard on the rump, maybe not perfectly ideal for winter, not super cheap (starting MSRP is $44,990) – all of that’s true, and none of it will matter much to those sold on the Mini vibe. Something that’s easy to be, because the charms of this car are many and manifest. 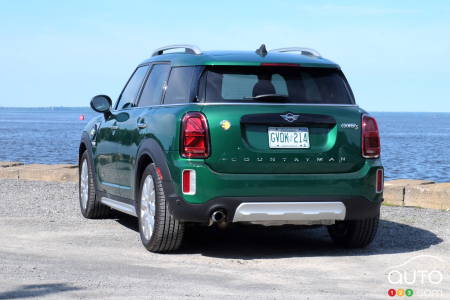 When it comes to the 2022 Tesla Model Y Performance, everything that matters is hidden out of sight. The vehicle's design is average but functional, while th...

Auto123 had the opportunity to test-drive the 2022 Chevrolet Camaro SS, a bit of irony on wheels as the model has reached a certain level of perfection and m...