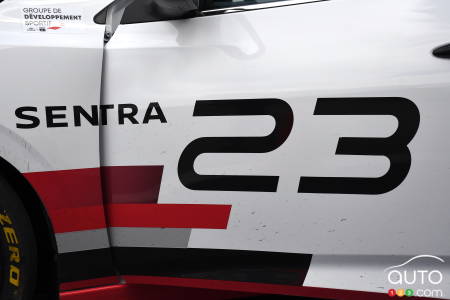 Auto123 test-drove the modified Nissan Sentra used in the Cup racing series that bears the model’s name, and which is getting a unique showcase under the spotlight of the Grand Prix Formula 1 Race in Montreal this weekend.

The current generation of the Nissan Sentra launched in December 2019, and quite frankly, the new edition represented a big step forward in terms of quality and road manners. Finally, Nissan had an interesting rival to the likes of the Honda Civic and Toyota Corolla.

But here's the thing. Within a few short months, the novel coronavirus arrived and ruined any momentum the new Sentra may have built via strong reviews and such.

This year, the statistics are on track to improve a little in the United States; here in Canada, the first quarter of 2022 saw sales of the Sentra drop by 4.5 percent.

Formula 1
And why are we talking about the Nissan Sentra in the context of the Formula 1, which is bringing its circus to Montreal this weekend? Because the Sentra Cup Series starring modified sedans is running two races here this weekend. Which means tremendous exposure for the series, but also for the car itself.

Will it have a direct effect on sales? Hard to say, because it's impossible to know if there's a direct link between someone seeing a Sentra go all out on a track and making the decision to buy one. Still, it can't hurt.

The Sentra Cup, for the uninitiated, is in its second year, though the concept is older. The current iteration succeeded the Micra Cup, which was launched shortly after that Nissan subcompact's debut in 2015. The series, brainchild of promoter Jacques Deshaies, was developed in close collaboration with Nissan and with Motorsports in Action, the company charged with modifying the cars’ frames to adapt them to life on the track.

This past May, we had the opportunity to test drive the modified Sentra on one of the tracks at the Mosport complex in Ontario, to see what it's made of. 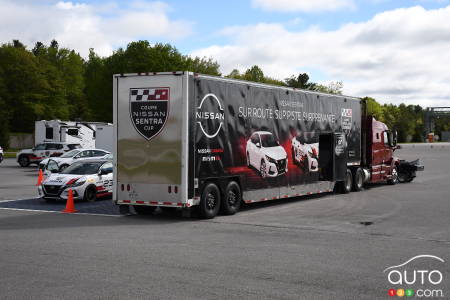 Photo: D.Rufiange
Start of our day test-driving the modified Nissan Sentra, at Mosport

About those modifications
“The idea with this type of series is to offer people who want to race the opportunity to do so on a relatively reasonable budget," explained Jacques Deshaies.

That's why the Micra was the first model chosen to star in the Series. Micras modified to run on the track could be purchased for about $20,000. Today, we're talking about double that cost to obtain a competition-ready Sentra, but in return drivers get to race a more powerful model to push the driving experience a little further.

At the same time, the idea was to keep the car as original as possible to ensure drivers competed on an even playing field. In fact, teams can adjust two things to make them stand out, the rest is up to the driver, explains Jacques Deshaies: “They have to determine the air pressure for their tires themselves and they also have the possibility of adjusting the camber, which is the inclination of the tire with respect to the surface.”

As for the modifications, we spoke with Carl Hermez of Motorsports In Action. Here's what he had to say about the development work that went into the racing Sentra, which was done in the midst of a pandemic, we should add.

“The goal was to reduce costs as much as possible to provide an affordable race car. Some work had to be done to make sure the performance was there, though.” 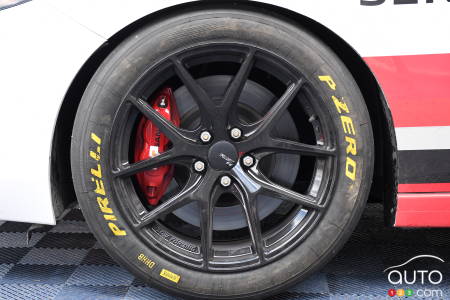 That's why the Sentra race car inherits the brakes from the NISMO version of the 370Z (with the Sport Package). In the rear, the Z's disc brakes were chosen over the base Sentra's drums, understandably. The suspension was developed to keep the car as close to the road as possible. As for the exhaust system, a performance unit is inserted from the catalytic converter to the rear, adding a few horses in the process, while modifying the music emitted by the car. As for the wheels, they run on smooth tires.

On board, we recognize part of the Sentra's normal dashboard, especially the centre console where the gear selector is located, but we're surrounded by a protective cage and facing a removable steering wheel, whilst sitting in a racing seat. Fun fact: the rearview camera is permanently active and serves as a rearview mirror. An electrical circuit breaker has also been added to be able to cut everything off in case of an incident.

The Canadian Grand Prix has been officially postponed by its organizers, and no new potential date has been set. Ultimately, Formula One officials will deter...

F1: Technical photos of the F1 cars in Montreal (+photos)

Here are a few photos of the Formula 1 cars ready to tackle the Gilles Villeneuve circuit in Montreal at the Canadian Grand Prix.