If you follow the automotive domain even casually, you’re likely aware that the electric products offered by manufacturers are improving at a breakneck pace, seemingly every month. Already the ordinary consumer is relieved to see it no longer takes $100,000 to acquire a Tesla Model S or X or else be limited to within city limits by a car with insufficient battery range.

Very recently, Canadian consumers – especially those residing in the provinces of Quebec and British Columbia, which offer rebates on the purchase of EVs – have two relatively affordable vehicles to choose from: the Chevrolet Bolt, available since 2017, and the brand-spanking-new Hyundai Kona Electric.

You could add to that the Tesla Model 3’s base model; its starting price of $47,600 is actually just a few whiskers above those of the Chevy and the Hyundai. This summer we’ll also see three new pretenders enter the “affordable” EV sweepstakes in Canada. The Nissan LEAF Plus and its 363-km range will certainly draw attention, as will the two Kia models, the Soul and the Niro, which are of course very close cousins mechanically speaking.

But the goal of our exercise here is to pit the popular Bolt and the soon-to-be-best-selling Kona Electric head-to-head in a Battle Royale of “mass market” EVs.

Chevrolet Bolt, the “old-timer”
The Bolt is of course no old-timer at all, but it is if you count only cars that you plug in to a socket and not bring to the gas pump.

It’s a popular pastime these days to pile on General Motors, what with its five plant closings in the U.S. and Canada. But it behooves us to remember that the Chevrolet division was out ahead of Tesla with its little Bolt. Now the Chevy EV might not be as pretty as the Model 3, but it does run 383 km between charges.

The shaping of the Bolt is not as aggressive as the Kona’s, but it’s not hideous and it has the important quality of not looking like a slew of other models currently on our roads. This is especially so when it’s sporting that striking yellow finish our testers had when we drove it in the fall and again in wintertime.

Read our Review of the 2019 Chevrolet Bolt

Read our Wintertime review of the 2019 Chevrolet Bolt

Also worthy of mention is the headroom the Bolt provides, which is noticeably superior to other models of its dimensions.

Fitted with a 150 kW electric motor (for the equivalent of 200 hp) that’s fed by a 60 kWh lithium-ion battery, the Bolt manages not to fit the image we have of electric cars, exactly. With 200 hp at its disposal and every bit of the 266 lb-ft of torque available as soon as you depart off the line, the Bolt is well capable of burning some rubber. And with a 0-100 km/h time of 7.2 seconds, the Bolt is not tortoise either. 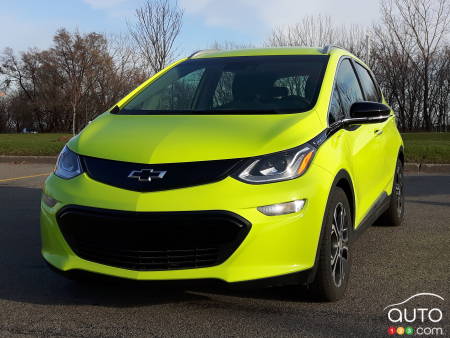 We do lament this little Chevrolet’s overly firm seats, which can get uncomfortable on longer trips. Enough that we already have to deal with the ever-present range anxiety in this EV, we don’t need sore-butt anxiety to go with it when we want to drive to the next town! Chevrolet will need to address this very fixable issue when it revises the model.

Fortunately, when it comes to the driving experience, sore butt notwithstanding, the Bolt is impressive, in good part because of that instantly available torque, but also because of the wonderfully quiet ride and because of the car’s low centre of gravity (for which we can thank the engineers for placing the battery pack under the floor). When cornering, the Bolt is really surprisingly assured.

As with every single EV we’ve driven to date, the Bolt sees a huge portion of its range get lopped off when temperatures dip below freezing. For Canadians, that’s obviously a factor to keep in mind. As we discovered during our wintertime test-drive, you could well see that optimal 383-km range drop to just over 200 km. That’s enough to change your plans if you’re thinking to taking your Bolt on the two-hour trek from Montreal to Ottawa, now isn’t it?

Also to consider: The wee Chevrolet Bolt is, well, wee. So that despite the vehicle’s high-on-its-legs crossover stance, cargo space is not that great when the rear seats are up. Fold them down, on the other hand, and that changes substantially.

Hyundai Kona Electric, the greenhorn
Here is the newest player in the electric segment, all shiny and new and much talked-about. In a short time on the market, the Kona has already established itself among Canadian consumers in its combustion-engine versions. Now comes the second volley of the offensive from the Korean automaker.

And it’ a doozy. Not only is the Kona Electric more powerful than the 4-cylinder turbo version, it also edges past the Bolt for output with 201 hp (150 kW) and more torque (291 lb-ft).

Like Chevy’s Bolt, this crossover features a single-speed transmission that sends power only to the front wheels. That’s right, it might have airs of a go-anywhere SUV, but the Kona Electric can’t be had with AWD like other, more expensive EVs can. We’re guessing the manufacturer is already at work on a variant with that type of drivetrain, but it won’t necessarily fall into this price range.

Read our Review of the 2019 Hyundai Kona Electric

The 2019 Kona Electric has an impressive official range of 415 km, though like every other EV that drops off big time in winter, as mentioned. We registered a decrease of almost half, though that depends on several different factors (outside temperature, whether the vehicle is pre-heated or not, etc.).

In comparison with its gas-engine siblings, the Kona Electric doesn’t upset the whole apple cart in terms of the interior, but it is distinct. The central console is placed higher, there are buttons for gear shifting, and the floor is slightly elevated in the back (to accommodate the batteries under the floor).

Hyundai’s zero-emissions crossover is also a very pleasant vehicle to drive in daily comings and goings. Nimble, pleasingly small and manoeuvrable in heavy traffic, and as mentioned a veritable demon when the light turns green, it even features a retro-futuristic little sound when you’re first accelerating that can make you feel like you’re at the controls of an electric airport terminal train. How cool is that?

Chevrolet Bolt advantages
Right now, the Chevrolet Bolt benefits from the arrival of new EVs on the market and the increasing overall interest in electric cars on the Canadian market. Consumers have not been hesitant to go for the “old-timer” among EVs. If the stiff seats don’t bother you, the Bolt is a proven choice with a proven track record.

Hyundai Kona Electric advantages
For its sharp small-SUV look the Kona clearly scores better than the Bolt, and in my view its driving dynamics more closely approach those of the gas-powered model – though without the sound of that version of course. Its superior range speaks for itself. Although, as we feel obliged to keep repeating, future owners should bear in mind the effects Mother Nature’s vagaries can have on it.

Similarities
Both models perform impressively and come with good warranties (especially Hyundai’s), and benefit from a massive dealership network, which you can’t say about Tesla.

Verdict
In this case, because of the superior range it delivers, because its driving dynamics are slightly better, and because it doesn’t cause sore-butt anxiety (or actual sore butts), the win goes to the greenhorn, the Kona Electric! 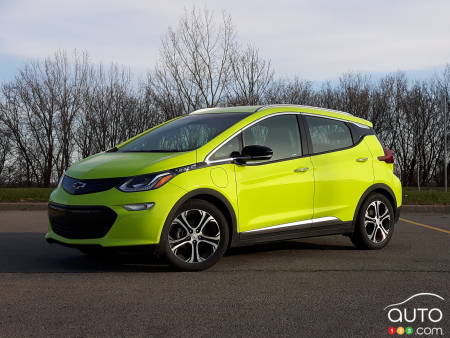 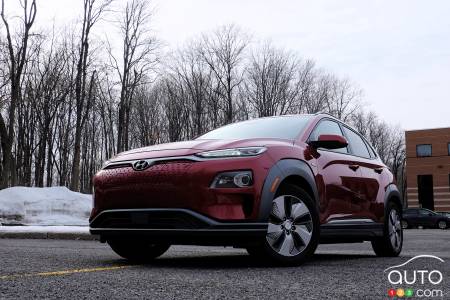 Top 8 All-Electric Vehicles in Canada in 2019

To mark Earth Day 2019, Auto123.com once again presents our annual list of the best electric vehicles available in Canada this year, comprised solely of mode...

We Drove the 2019 Chevrolet Bolt in Winter: Learning to C...

Studies have confirmed what anyone who drives an electric-powered car in winter already knows: In wintertime EVs’ range melts like snow under the midday sun....