Here are two American midsize vehicles fighting it out in the 5-seat SUV segment. These two vehicles have a lot in common, however the Edge has a new ST version offering a sportier drive for those still looking for performance under the right foot. Is this enough to make this model stand out? We take a look.

Since Ford no longer sells cars except for the Mustang and the Fusion, it had to either give a new direction to the ST sport division or shutter its doors. Ford decided it would give the ST treatment to its roster of trucks. The catch, of course, is that the American automaker has to convince people that a sport truck is something worth having. For our part, we admit we’re not convinced. But then the German manufacturers all do it, so why shouldn’t Ford have a crack at it?

Available models
In 2019, the Edge family moved to a fully turbocharged engine range: the old 3.5L V6 is no longer, and all versions except the ST now use a 2.0L 4-cylinder turbo developing 250 hp and 280 lb-ft of torque, wedded to an 8-speed automatic transmission. 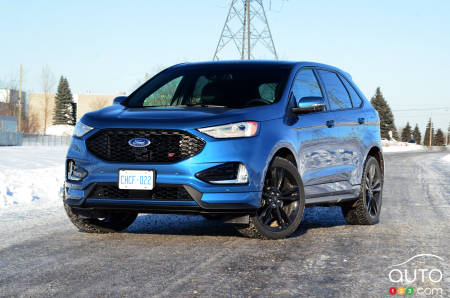 Aging well
The current iteration of the Edge dates back to 2016 and frankly its styling has aged well, which goes some way to explaining its popularity. All models come standard with passive keyless entry, side mirrors with integrated wide-angle blind spotlights, manual climate control, four-way manually adjustable driver and front-passenger seats, SYNC infotainment and 18-inch wheels.

On the ST you get improved maneuverability and braking, ST-tuned suspension and Sport mode with a sport configuration for the 8-speed automatic transmission. All models come standard with all-wheel drive except for the SEL, which starts as a front-wheel-drive model. 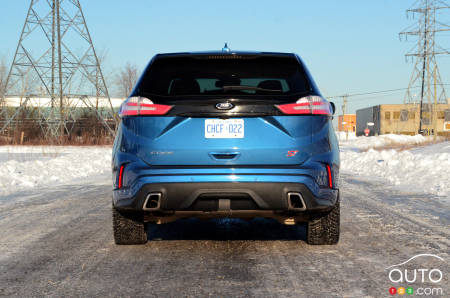 You can now also get your Edge with collision braking, lane keeping assist and adaptive cruise control.

On the road
Designed primarily for families, the Edge offers a more interesting ride than a van, but it can’t really compete with sedans. Regarding the ST, frankly we were disappointed. This is not the kind of configuration that suits this vehicle. It's “kind of” sporty without ever really nailing it, mostly because Ford wanted an affordable price point and thus made a lot of compromises that ultimately undermine its capabilities as a sporty ride. If you want a sporty vehicle buy a sports car, not a truck.

It remains to be seen whether the Edge ST will encourage other domestic car makers to turn to performance-oriented midsize utilities, a market niche that has until now been the preserve of manufacturers like BMW, Audi and Mercedes-Benz. But let’s be clear, we’re very far from the level of those models with the Edge ST. 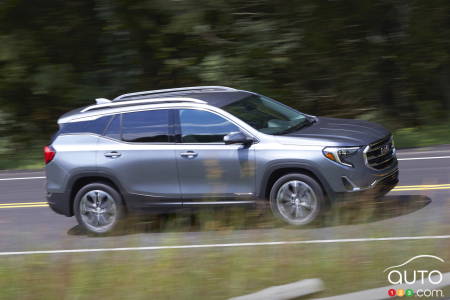 GMC never had to make any calculations about which models of cars should be put out to pasture out to make more space for trucks; GMC only sells trucks. The Terrain, the more distinguished sibling of the Chevrolet Equinox, also comes with a slightly more opulent image.

For the current year, there are no notable changes, only some minor adjustments. These include adaptive cruise control with forward braking and a new high-definition backup camera (a standard for entry-level models and a panoramic version for higher-end models). These versions start with SLE and include the SLT up to the very-well-equipped Denali.

4 cylinders only
The engine choices are simple: they’re all four-cylinder turbos. The base model uses a small 1.5L unit good for 170 hp and 203 lb-ft ot torque, and the other gas engine is a 2.0L turbo producing 252 hp and 260 lb-ft of torque. Beyond that there’s a 1.6L diesel engine delivering 136 hp and 236 lb-ft. The latter configuration gets a 6-speed automatic transmission, while gasoline-engine versions of the Terrain use a 9-speed transmission. Versions with the smallest of the gasoline engines as well as the diesel-powered ones can be used as a FWD or AWD, but the 2.0L is all-wheel drive only. 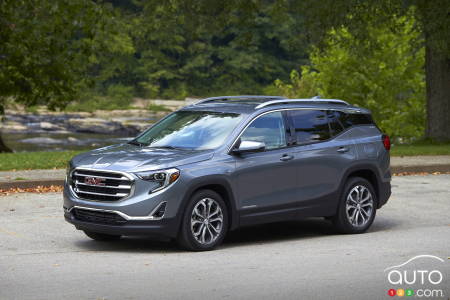 On the road
The driving experience is closely linked to the engine under the hood. While the diesel engine is very economical, the 6-speed transmission it works with is a little lazy and encourages “responsible” (read gentle) driving. The 1.5L is OK as long as having fun at the wheel is not on your to-do- list. The 2.0L engine remains the most interesting and for that some credit goes to the solid chassis, which contributes to a better experience behind the wheel.

With its ST version, the Edge still delivers at least some level of performance to those in search of a more-inspiring drive, something that’s simply impossible to find at GMC. There’s also the benefit of a more interior space for both luggage and occupants.

The GMC Terrain looks better than the Edge, especially in its highly successful Denali version. It's also the only one to offer a diesel version for those who want to get the most out of a full tank of fuel. Also you will spend less money buying a Terrain.

Both offer comparable space for four. Both 2.0L turbo engines are close in output and fuel economy with comparable warranties.

A difficult decision to make because the two vehicles have a lot in common, but we give a slight advantage to the Ford Edge for its higher technological content and engines that offer better response and therefore a more enjoyable driving, even if the price is a bit higher.

The GMC Terrain and its twin the Chevrolet Equinox held down the fifth spot in their segment for sales in 2018. Which tells you something of their quality, b...