Officially turning 40 this year as a nameplate, the 2019 Volkswagen Jetta arrives in a troubled market segment riding on an all-new platform and aiming to win over buyers with a package that adds up to solid value without counting on any particular standout features.

There are certainly still a ton of Volkswagen-loving drivers out there, even with the well-publicized setbacks the manufacturer has suffered through due to the diesel-emissions scandal. That said, the new Jetta is definitely playing defence here, hoping to convince VW-friendly consumers to stick with the brand, and possibly poach some buyers away from the upward-trending Korean manufacturers Hyundai and Kia, among others.

One quite compelling argument the new Jetta has to make is in terms of the interior space it offers, one of the best in its class. Basically, the experience of sitting in it approaches that of sitting in a mid-size sedan. That’s pretty interesting to buyers with a kid or two.

Check out our photo gallery of the new 2019 Jetta.

Specifications for the 2019 Vollkswagen Jetta

What’s new
As mentioned, Volkswagen has deposited the new 2019 Jetta on to its all-new MQB platform, which is making its way through the German giant’s entire lineup. One benefit is that the wheelbase, overall length and width have all increased, thus making for a bigger cabin.

The front grille has been modified for 2019, as has the roofline which is somewhat more coupe-like (but let’s not get carried away, this is no sportback-type car). The trunk gets a tiny little integrated spoiler as well for a slightly sportier look out back. 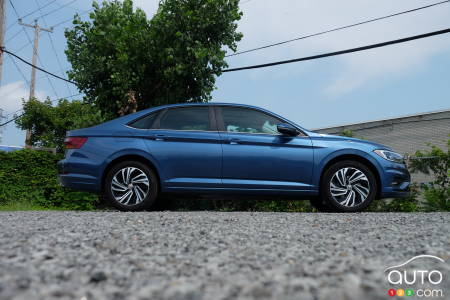 Inside, the Jetta now features a new Digital Cockpit instrument cluster, highly personalizable to show the data you want to see. Right in front of the driver is an exclusive new 10.2-inch screen that can be fully configured. Take note that this comes with the upper-range Execline trim, which is nearly $7,000 more expensive than the Comfortline’s $20,995 base price, so you’ll have to think hard about how badly you want that nifty set of systems. Mind you, with that you also get leather seating, heated and ventilated front seats, premium 400-watt Beats audio system (replacing the current Jetta’s Fender system), an electronic limited-slip differential, 17-inch wheels and LED headlights.

Golf with a trunk?
The Jetta has long been considered by many a less exciting adjunct to the popular Golf, a car for VW lovers who want a “conservative” four-door sedan in lieu of the hatched Golf. Esthetically, they have a point. The Jetta’s lines are pleasing enough, especially now that the front grille has been revised for a snazzier snout, but it doesn’t exactly look radically different from any number of standard-issue 4-doors on the market in its segment.

But there’s a more fundamental difference. The Jetta drives like a VW, which is to say it’s responsive and nimble enough and holds the road fairly well. But it’s more staid than the Golf is in any of that model’s iterations. Suspension is firm but not tight, the steering is slightly looser than in its sibling, and the typically VW engine sound is here rather muted. Overall, this makes for a high-quality but notably less exciting drive. 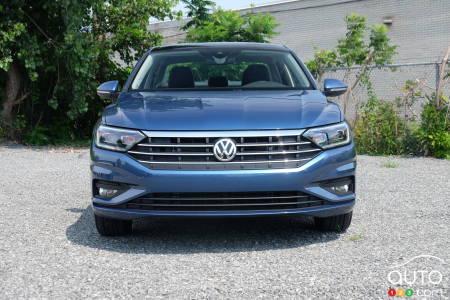 Auto123 went to Tennessee to discover in the flesh the 2019 GLI version of Volkswagen’s Jetta. While the model clearly offers more in terms of power and perf...