Pros: The 2014 Aston Martin DB9 is one of the “most posh” luxury exotic cars on the road, meaning one of the most comfortable and beautiful out there. This timeless grand tourer’s perfect proportions mimic the near-perfect weight distribution and works with its aerodynamics to make the DB9 as agile and safe as it is fast. Inside, the sumptuous 2+2 seating configuration is slathered in the finest Bridge of Weir hides, real glass and carbon fibre.

Cons: The DB9 is not the fastest around a track, and no dual-clutch transmission is available. Also,, the rear seats of the 2+2 coupe will never actually be used, but it may be best to keep them as a “nice-to-have.”

Improvements and Changes: Last year saw the Aston Martin DB9 get a once-over that replaced more that 70% of its body panels and 50% of all parts. For 2014, it remains virtually unchanged.

2014 Aston Martin DB9 Powertrain: All DB9 models are powered by a silky-smooth 6.0L V12 engine that produces a massive 510 horsepower and 457 lb-ft of torque. As mentioned earlier, the only available transmission is a 6-speed “Touchtronic 2” autobox with a limited-slip differential.

Don't miss: Elegance extends into the smallest detail. For instance, the DB9 features “race track” stitching, inspired by the bends on a circuit. Different thread weight is used throughout the interior of the DB9 with a heavier “10 gauge” thread used to strong effect while a thinner “20 gauge” thread is more subtle and gives finer detail.

On a totally different topic, the revolutionary carbon ceramic brakes are the most sophisticated ever fitted to a DB9. Larger than an equivalent steel brake but an impressive 12kg lighter, they reduce fade through better heat dissipation and improve performance through silicon-injected carbon fibre.

Safety: All manners of airbags and electronic nannies are standard on the 2014 Aston Martin DB9.

The 2014 Aston Martin V12 Vantage S is, according to the company, the fastest and most extreme series production model it has ever produced, with near-perfec...

Aston Martin is being sued for $100 million USD by former head of design Henrik Fisker. Apparently, the company doesn’t want Fisker to unveil his Force 1 at ... 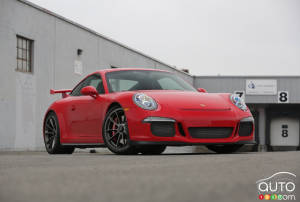 I ran out of room in the sub-header... 2x3 cylinders; drag coefficient of 0.33; and then there's the name: GT3. The letters GT stand for Grand Touring, but w...