Pros: The 2014 Aston Martin V12 Vantage S is, according to the company, the fastest and most extreme series production model it has ever produced, with near-perfect weight distribution and exceptional handling. Never opulent but always dramatic, this super-striking coupe underwent nearly two years of extensive testing to ensure it's tailored for a visceral driving experience. Let's not forget the unprecedented range of options.

Cons: At this point we're really just nitpicking... Visibility and storage capacity could be better, but who cares? And sure, there are just two seats, but would you actually want to bring the kids along?

2014 Aston Martin V12 Vantage S Fuel Economy: Official ratings for the V12 Vantage S are still unavailable, but you should know that the outgoing V12 Vantage burned 12.1L/100km on the highway and 19.1L/100km in the city.

Improvements and Changes: Compared to the V12 Vantage, power and torque are up 11% and 9%, respectively. It also features an even more responsive transmission, an even lighter chassis (-15kg), all-new carbon-ceramic brakes, and a unique track mode with delayed ABS technology.

Don't miss: Inside the 30% quieter cabin is an Easy-Start button you don’t even have to depress to start the engine. Occupants sit in lightweight or sports seats with a new trim layout. Elsewhere, three modes (Normal, Sport, and Track) give fantastic driver flexibility: Hundreds of readings per second adjust each damper based on road conditions, vehicle performance, and driver control. 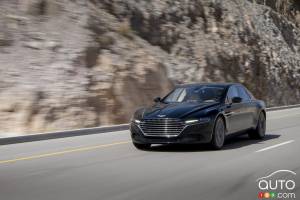 Aston Martin today released new images of its upcoming super-sedan, the 2015 Lagonda, which will be produced in very limited numbers for wealthy customers in...

The 2014 Aston Martin DB9 is one of the "most posh" luxury exotic cars on the road, meaning one of the most comfortable and beautiful out there. This timeles...

Today at the 2013 Frankfurt Auto Show, Aston Martin unveiled the new V12 Vantage S and Vanquish Volante, which will go on sale around the world a few weeks f...