Pros: The 2014 Aston Martin Vanquish Volante is a new luxury convertible that sits at the top of the British automaker's sports car lineup. World-class power, style and craftsmanship combine with a power retractable, lightweight fabric top for a unique motoring experience. It's the fastest and stiffest Volante ever made, and the first with a full carbon fibre body (at 1,844 kg, this drop-top is just 9 kg heavier than the coupe). The roof folds away in 14 seconds only at speeds of up to 50 km/h. Aston Martin also offers plenty of body colours and customization options.


2014 Aston Martin Vanquish Volante Price: The exact Canadian MSRP hasn't been disclosed, but customers should expect to pay upwards of $300,000.

2014 Aston Martin Vanquish Volante Fuel Economy: Official ratings for the Vanquish Volante are unavailable at this point, but they should be pretty similar to the coupe's -- 10.7L/100km on the highway and 16.2L/100km in the city.

Improvements and Changes: This is an all-new model based on the Vanquish coupe.

Cargo Capacity : Seriously? You have to ask? All you need to know is that the trunk is more than 50% larger than the outgoing DBS Volante's with the roof up or down.

Safety: ABS, dynamic stability control with track mode, positive torque control, traction control, and launch control are all part of the package. Side curtain airbags mounted discreetly on the upper door trim combine with driver and rear passenger airbags. Aston Martin's advanced Rollover Protection System deploys hidden spikes from behind both rear headrests, removing the tonneau trim cover and shattering the rear screen to provide protection for driver and passengers in the event of an accident. 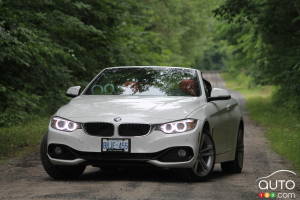 The BMW 428i xDrive Cabriolet isn’t one of those extreme-performance BMWs that ship with laser-precise steering, organ-rearranging grip, a paint-peeling exha... 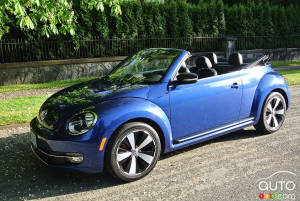 Despite my (some would say) advanced age I still get excited about cars. Like, really excited. Like, so excited that when I left Mazda Canada's regional offi...