For the 14th time in its history, the legendary Chevrolet Corvette has been chosen to lead drivers to the start of the Indianapolis 500, the 101st edition of which takes place on May 28, 2017.

The 2017 Corvette Grand Sport, equipped with a 460-hp LT1 V8 engine, will serve as the official pace car for the 500-mile race. The car also features carbon-fibre body elements, exclusive 19-inch front wheels and 20-inch rear wheels, Brembo Carbon Ceramic brakes and a Z07 package. It can accelerate from 0 to 60 mph (97 km/h) in 3.6 seconds and cover the quarter-mile in just 11.8 seconds.

The histories of Chevrolet and the hallowed racing event in Indiana go back a long way and have often intersected. Louis Chevrolet founded his car-making company in 1911, the same year the very first Indy 500 was held. Louis’ brother Arthur actually participated in that inaugural race, and nine years later another brother, Gaston, won the 1920 edition. 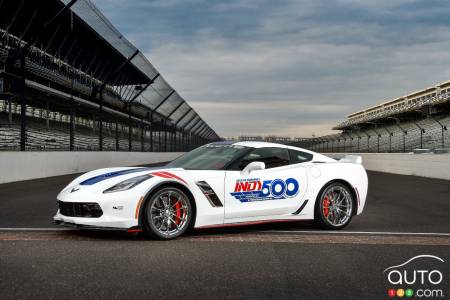 The new 2019 Chevrolet Corvette ZR1 has just beaten the record for fastest lap time by a production car at Virginia International Raceway, beating out the Fo...

2 Corvettes, a Ford GT and the Mustang Bullitt Bring Mill...

Barrett-Jackson’s celebrated auction took place recently in Arizona and brought in over $US 5 million for charity just from the sale of four iconic American ...