The redesigned new 2019 Hyundai Santa Fe, which marks the debut of the popular crossover’s fourth generation, has just been given the Insurance Institute for Highway Safety (IIHS)’s best rating, that of Top Safety Pick+.

The crossover earned the best possible score of Good in every crash test carried out by the IIHS, including the passenger small overlap frontal test, in which the older-generation 2017 edition managed only an Acceptable rating.

Don’t skimp on upgraded headlights!
In the tests carried out on headlight performance, the 2019 Santa Fe was given a Good rating. But like with the 2019 Subaru Ascent, also awarded the Top Safety Pick+ rating this week, this depends on the model being equipped with the upgraded optional LED headlights, included in its Limited and Ultimate versions. 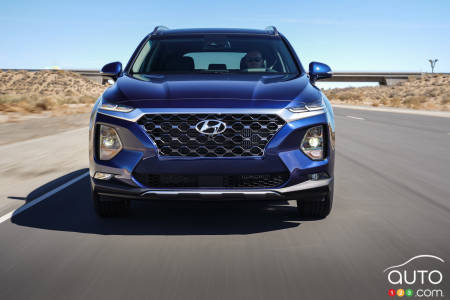 When running with the base halogen headlights, the 2019 Santa Fe earned only a Marginal rating, one above the worst. This was due mainly to the lights not providing sufficient lighting.

The Santa Fe’s front crash prevention system is rated Superior, and in the 2019 edition this is now standard equipment.

It’s big, it’s practical, and it’s safe. The new 2019 Subaru Ascent has earned the Top Safety Pick+ rating for 2018 from the Insurance Institute for Highway ...