The all-new 2019 Subaru Ascent has earned the Top Safety Pick+ rating for 2018 from the Insurance Institute for Highway Safety (IIHS). It joins the five other 2019 model-year vehicles so designated by the American organization so far this year. 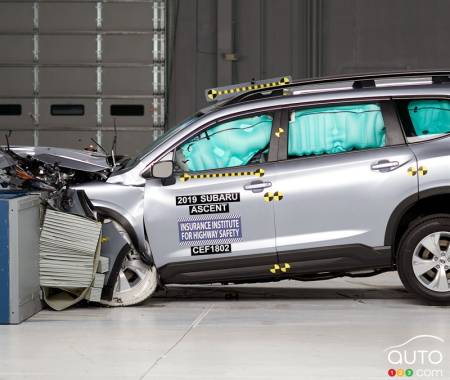 However, keep in mind that all of this only applies to models equipped with the available bending (or directional) LED headlights. In the case of the base and Premium trims with their halogen headlights, the Ascent did no better than earn a Poor score.

Available add-ons include Subaru’s system for rear and side vehicle detection that includes blind spot warning, lane change assist, rear transversal traffic warning and automatic reverse braking, as well as a front camera and an intelligent inside rearview mirror.

The current Subaru lineup includes seven models that have earned the IIHS’s highest safety rating – an impressive achievement. They include the Impreza sedan and Impreza 5-door, the Legacy, the WRX, the Crosstrek, the Forester, the Outback and now the Ascent. All but the last one are 2018 models, and in all cases, they earn the rating when equipped with the EyeSight system and with the available headlights instead of the standard ones.

The redesigned, 4th-gen new 2019 Hyundai Santa is off on the right foot, having just been given the Insurance Institute for Highway Safety (IIHS)’s best rati...