Jeep today presented its new 2019 Jeep Renegade in a European premiere at the Turin auto show, in Italy. Launched in 2015, the model is not exactly old, but it was ready for a refresh; the time was right for the manufacturer to tweak its smallest SUV model. At the speed with which things are currently advancing in the automotive domain, to snooze is to lose, after all!

The first images reveal a slightly redesigned model, which nonetheless preserves its essentially square shape. The obvious changes have to do mainly with the lights: the front headlights are new, and now get LED lighting encircling them, while the rear lights have also been modified, although they retain their familiar x-shaped design.

Overall, the silhouette of the new SUV is much the same as the outgoing version, although the model gets new front and rear bumpers. The version of the Renegade introduced today is of course the European edition of the model, and while we can be pretty sure that visually the edition that gets released in North America will be identical, that is likely not the case in terms of the mechanics that were announced today in Turin. At present, our Renegade comes with either a 1.4L 4-cylinder (160 hp) or a 2.4L 4-cylinder (184 hp). Here's hoping that the next edition will benefit from upgrades under the hood, and especially more choice for buyers in terms of the engine-transmission options.

We’ll likely learn more about that in the coming days and weeks!

There was no mention today of any possible hybrid variant of the new Renegade, this amid persistent rumours to that effect in recent weeks. 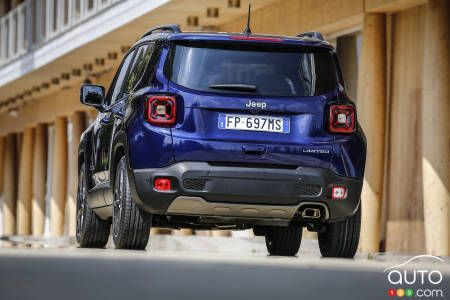 Jeep is currently the Fiat Chrysler Group’s most profitable division, and the presentations of five-year plans made by FCA last week included an ambitious growth plan for the SUV manufacturer. We already know, in fact, that the company intends to produce a new Jeep model even smaller than the Renegade, which will give Jeep a presence in the subcompact utility segment. The Renegade has been a success story for Jeep, having racked up 100,000 annual sales in the last two years. Perhaps more importantly, it has allowed the manufacturer to draw in consumers new to the brand. It seems an entirely logical move to go after buyers of very small city-focused utility models.

The new 2019 Jeep Renegade, In Pictures

Discover newly published images of the new 2019 Jeep Renegade, in the incarnation that European consumers will be buying as of this fall. Still, we expect th...