Taking place somewhat in the shadow of many other splashy premieres in Geneva, at least from our North American point of view, was the unveiling of the next-generation 2020 Buick LaCrosse. Why in the shadow? Because the new edition will be sold in just one market: China.

In North America the LaCrosse has been sacrificed, like several other sedans, as part of GM’s restructuring and in the face of ever-increasing consumer demand for all things crossover/utility.

For Buick, the story is quite different over in China. In fact that market is the GM division’s biggest. 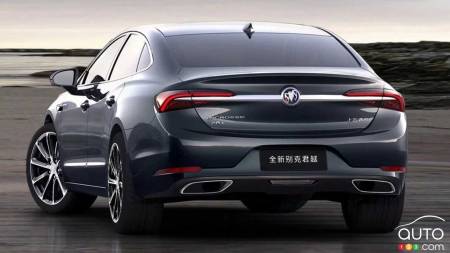 Spectacular
Now that we’ve gotten a look at the car’s new lines, however, we’re wondering if it couldn’t have made a go of it in our market after all. Its contours are simply exceptional, both in front and in back. The front of the grille has been redesigned and gets thinner LED headlights, and the bumper extends a little further downwards.

The back end, meanwhile, gets lights wrapping around the chrome strip that spans the width of the car, and the exhaust tips are more aggressive than what we’re used to from Buick.

New engine
The 2020 LaCrosse gets a 2.0L 4-cylinder in use in the Cadillac XT4 since last fall. This unit delivers 237 hp and 258 lb-ft of torque working in conjunction with a 9-speed automatic transmission.

Are you as enamoured of the new LaCrosse’s looks as we are? You’ll have to travel across the globe to see it in the flesh.

Nice as it is, though, could it have radically changed things for Buick over here? Probably not, if we’re being honest – at least not in the short term. Still, it makes you think that if Buick could have continued to offer such products, eventually it might have started to reassert itself in North America.

The outgoing Buick LaCrosse sedan was built at GM’s Detroit-Hamtramck plant in Michigan, which the company is shuttering.

Leaked images originating from a source in China that reveal the next generation of the Buick LaCrosse premium sedan have spread across the Internet. We don’...

Volvo has revealed the Polestar 2 a week ahead of its official public debut at the Geneva Motor Show. The second car produced by Volvo’s stand-alone electric...

Second representative of Buick’s new prestige banner to hit the market after the Enclave, the LaCrosse Avenir, a new top-of-the-line version of Buick’s flags...