The LaCrosse model is the next of Buick’s vehicles in line to get a full makeover. The next generation of the sedan is expected in 2019 as a 2020 model, and, in keeping with current trends, first images have “somehow” leaked and gone viral.

Intrigue aside, we hereby get a foretaste of the revised big sedan from Buick. It’s perhaps no surprise that the images were first leaked in China, which happens to be a prime market for GM in general and Buick in particular. In fact, the images of the next LaCrosse were first spotted on a government website that shows certifications for new models.

The two images, while they’re not of super high resolution, reveal that the model will adopt the visual signature already seen on other Buick models. It starts with the front grille that features a band of chrome flanked by the company logo at the centre. For the rest, the fascia features air vents that have been redesigned and have larger openings, and headlights that are more streamlined. Also visible is a new, bolder wheel design, which indicates a desire to bring more sporty appeal to the LaCrosse. 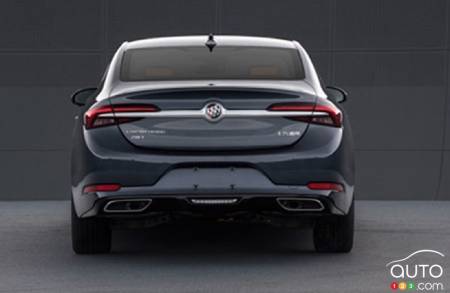 The revisions at the back end are just as substantial. The rear lights are now linked by a second chromed band that span the width of the trunk. As in front, the lights themselves are thinner and more stretched out.

Given the timing of the leak, we could well be seeing the next LaCrosse on display at next week’s Los Angeles Auto Show. Stay tuned as we’ll be at the event providing you with full details on all the new products.

Buick gave its next-gen 2020 Buick LaCrosse its world premiere in Geneva this week, but actually the model will only be sold in China, a huge market for the ...