The Ford Bronco, whose return to the market is one of the industry’s most anticipated events, is expected to be debuting at dealerships for the 2020 model-year. In principle, it should be making its in-person debut at the next Detroit auto show in January 2019 – a logical move, since it was at the 2017 edition of that event that its return was first announced.

This also means we shouldn’t have been seeing any images of the Bronco for another couple of months, barring a Ford-released teaser image or two. This past week, however, some images of the model, or possibly of the much-talked-about Baby Bronco, were shown at a dealers’ meeting in Las Vegas, and these were dutifully photographed and made their way online.

Might Ford have had something to do with this leak? We’ll never know, but there’s no doubt the free publicity it gains from it shouldn’t be too displeasing to the automaker, especially as we’re on the eve of the Los Angeles Auto Show.

The images
And what do they reveal? For starters, we’ve learned that the contours of the new Bronco (or baby Bronco) clearly link back to the original model, which debuted back in 1966, via its square shape and relative paucity of rounded curves.

Ford is clearly gearing up to go right after Jeep’s Wrangler, and sees no reason to be subtle about it.

Another thing that was noticed by many as the images went viral, is that one of them shows the shadowed profile of another, larger and squarer vehicle. Could this shadow represent the actual Bronco, meaning the vehicle actually shown is the Baby Bronco? 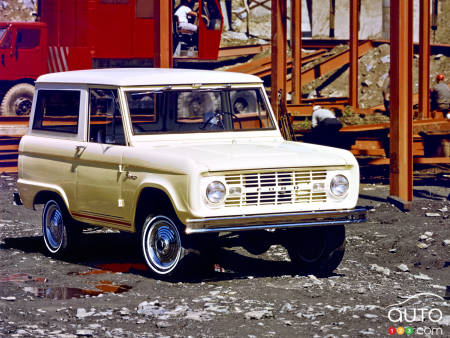 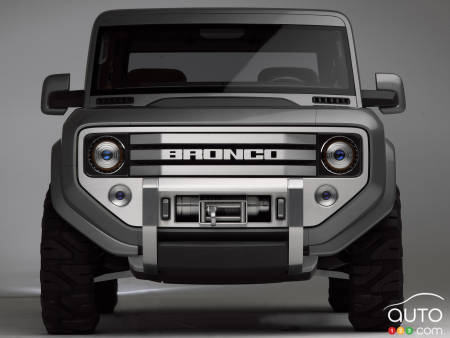 The Ford Bronco will be presented at the Detroit Auto Sho...

According to a source wishing to remain anonymous, the Ford Bronco will be presented at the Detroit Auto Show next June. Ford’s new SUV will likely benefit f...

An Aluminum Body for the Ford Bronco?

The latest solid-can’t-miss rumour regarding the new Ford Bronco has the SUV getting an aluminum body. We’ll know for certain in short order as the official ...

Ford has been following the tried and tested method of letting little drips of details drop as the debut of its new Ford Bronco approaches. Now the company h...