The 2020 Land Rover Defender, contemporary update of the iconic model that did much to make the reputation of the Land Rover brand, is scheduled to make its debut this coming autumn, likely at the Frankfurt auto show. Ahead of the launch, the automaker has been dutifully revealing tidbits about it in order to stir up interest.

This latest leak might not be a planned one, however. An image posted on an Instagram account shows the vehicle’s profile… in an image displayed on its dashboard instrument cluster. The model shown is technically a concept version of the new Defender, but it provides a clear idea of what we can expect come the fall.

Many will be delighted to learn from the image that Land Rover engineers have stuck close to the very square shape of the legendary model. In an era when many of the automaker’s products are copycats of one another, it’s a refreshing look.

It also appears that the new Defender is taking strong inspiration from the DC100 concept first presented in 2011 and which had made major waves at the time. A modernized version of that concept would e great news to many fans of the brand. 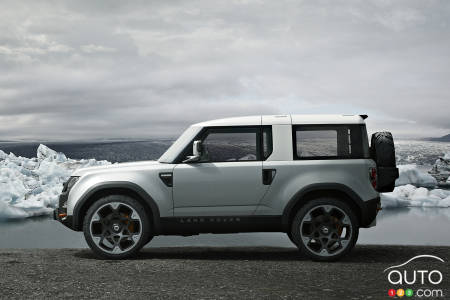 For the rest, we can deduce from the image that the new Defender will have a glass roof that integrates into the rear section and immense C pillar of the vehicle. In back, there’s a spare tire attached to the tailgate, which sends a clear message of what many owners of the new Defender plan to do with their SUV.

Visible towards the front are horizontal ridges low on the bumpers, and headlights that look more square than round, though here the impression from the image is not entirely to be trusted. On the hood, we can also make out an air vent.

The four-door model we see is to be the first of a series of editions under the Defender banner. We can also expect to get a two-door version, and even a Gladiator-style pickup.

We should know all about the Defender this fall, but in the meantime the image leaked this week is possibly enough to lift the spirits of Land Rover fans.

The new Land Rover Defender is awaited with bated breath by fans of the brand, but the novel coronavirus doesn’t care. The company is working hard to catch u...

Land Rover used the occasion of the 2019 Frankfurt auto show to present, finally, its new 2020 Defender. The styling of the reborn SUV respects the tradition...

A share-happy person on the set of the new Bond film has leaked a full-monty image of the new 2020 Land Rover Defender. The SUV is set to be unveiled officia...