Last night, Hyundai took advantage of technology to present the seventh generation of its popular Elantra model live on the Web. The big news, in addition to a design that promises to leave few people indifferent, is the arrival of a hybrid variant in the lineup.

At the same time, Hyundai sends a message loud and clear that it's not about to abandon the car segment. After the Sonata, the Elantra follows with its own completely new, aggressively redesigned look.

The exterior design of the model is sure to be the topic of some debate. Hyundai describes its approach as Sensual Sportiness, with the Elantra the second car to be transformed by it after the Sonata.

“Like the first generation, the seventh-generation Elantra/Avante has a bold character,” said Luc Donckerwolke, Hyundai's Chief Design Officer. The fresh aesthetics have been complemented by unconventional lines and a face that has broken a taboo in automotive design, in the view of the designer. How so? “The new Elantra is highlighted by its stance that looks like geometric crystals and divided body surfaces to get a strong emotional response from the customers,” he explained. In terms of dimensions, the car has gained 55 mm in length and 25 mm in width, and its wheelbase has grown by 20 mm. Conversely, the roof line is lowered by 20 mm. Hyundai in fact describes its new Elantra as a four-door coupe.

The engines
The 2021 Elantra will be available with two engines at the time of launch. The first is a 2.0L Atkinson-cycle inline-four making 147 hp and 132 lb-ft of torque. This engine is mated to the group's Intelligent Variable Transmission (IVT).

The big addition is, of course, the hybrid configuration, which will give Hyundai a model to compete versus the Corolla Hybrid. That variant benefits from a 1.6L 4-cylinder engine wedded to a 1.32-kWh battery and a 43-hp electric motor. In total, that translates into 139 hp and 195 lb-ft of torque, managed by a 6-speed dual-clutch automatic transmission.

Hyundai says the gas-powered Elantra will be the most economical in its class, though it has no specific numbers to share at this time. With the hybrid, the company is aiming for a combined fuel consumption of 4.7L/100 km. Where's the sportiness?
Hyundai made much at the launch of returning the Elantra sedan to its sport sedan roots. But the Elantra powered by a 1.6L turbocharged 4-cylinder engine (and independent rear suspension) is no longer on the menu, at least it won’t be initially.

Hyundai would seem to have a specific plan for a performance-oriented variant with an N-Line version in the works, though the company has confirmed nothing. The latter will pick up where the Sport variant left off, offering an interesting option for enthusiasts in the absence of a true N variant, like with the Veloster. Interior
Inside, the overhaul is just that, an overhaul. Hyundai even tapped into the luxury equipment of some of its range-topping models for the more-upscale variants of its new Elantra. There are for example two 10.25-inch screens on board - one for the instrument cluster and the other for the multimedia system. Mood lighting is also available in a choice of 64 colours. The driving position has been designed with the driver in mind, with an "aeronautical-style" layout, as the firm says.

In terms of technology, compatibility with the Android Auto and Apple CarPlay applications is of course available, as well as wireless connectivity.

Tech fans will also appreciate the digital key (available) that allows you to use compatible smartphones to lock or unlock your car. The 2021 Hyundai Elantra is expected at dealerships this fall, with the first deliveries scheduled for September. However, given the coronavirus outbreak and the changes it’s imposing on the automotive industry, nothing can really be considered confirmed at this point. 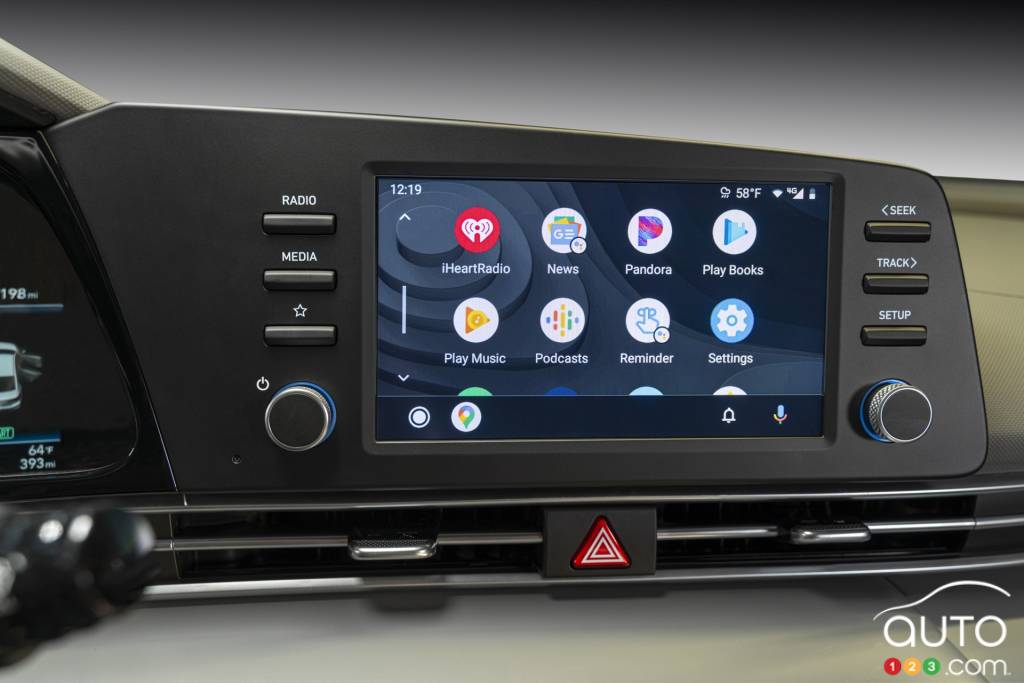 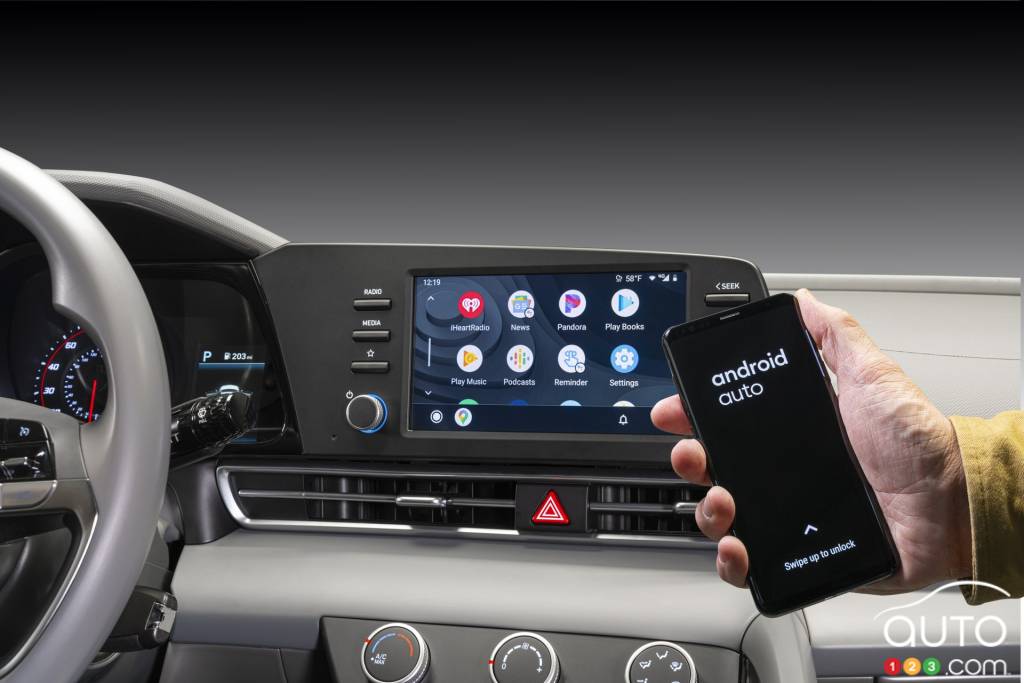 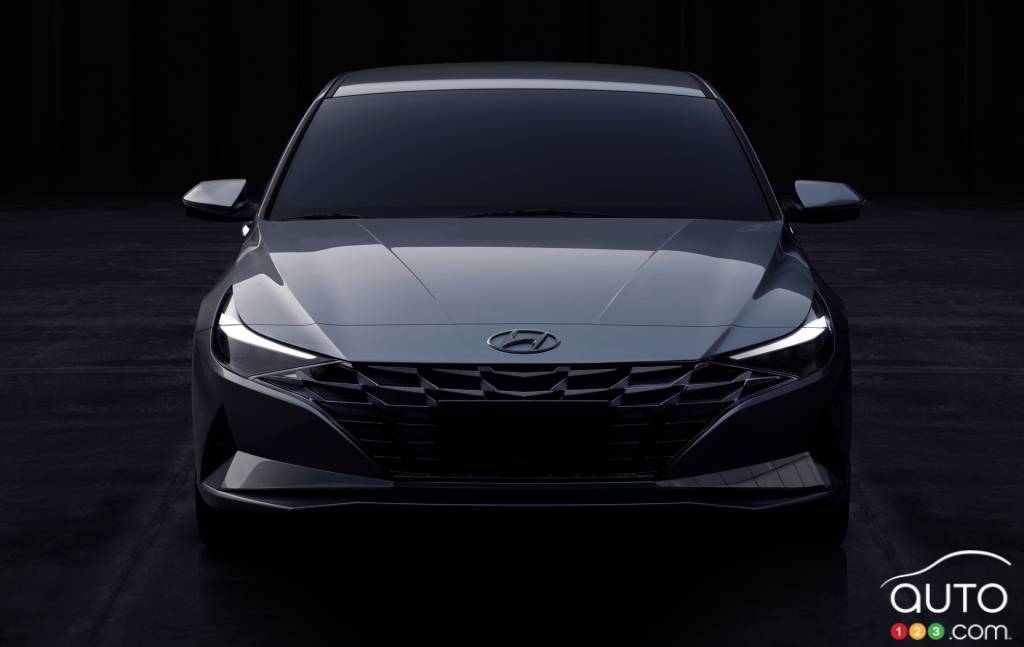 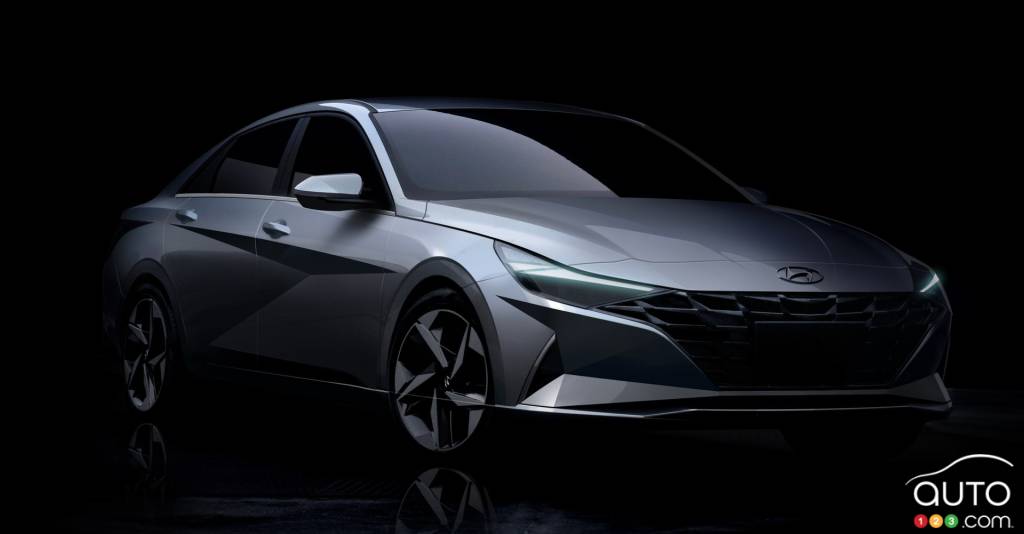 After showing us the regular model two weeks ago, Hyundai unveiled images of the hybrid version. Aesthetically, it's identical to the gasoline-powered varian...