Organizers of the Montreal International Auto Show (MIAS) have confirmed that the show will go on, in January 2022. After a two-year absence – the last, pre-pandemic show took place in January 2020 – the turnstiles of the Palais des Congrès in downtown Montreal will once again be turning as visitors pour in for the event.

That event will look somewhat different than it did in the early days of 2020, of course. Organizers are being careful to adjust people’s expectations:

“The easing of sanitary measures will allow us to finally resume our activities, however it is not a full return to normal. … We believe in the importance of presenting the 2022 Auto Show for car enthusiasts but, not all manufacturers will be present. We estimate that more than half of the brands will be participating. The manufacturers who withdrew their participation in all the major Canadian auto shows have justified their decision on vehicle shortages and weak sales.”

The statement issued by auto show organizers went on to say that the “Auto Show team is working on a smaller scale edition, but one that will still respect its essence, which is to present the new models of the participating manufacturers, an Electric Zone to discover the latest technological advances and special attractions.” 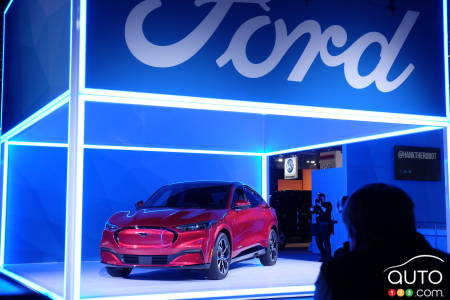 Photo: D.Boshouwers
Unveiling of the Ford Mustang Mach-E at the Montreal Auto Show, 2020

A triple whammy
Even before the pandemic hit, car shows were in trouble, in part because of auto manufacturers’ increasing reluctance to devote resources to these events in an age when they can put on model presentations at any time, from anywhere, even virtually only. The pandemic then obviously put a halt to in-person events, and now the ongoing chip/component shortage has given those automakers even more reason to at least take a break from auto shows.

Nevertheless, there will be an in-person Montreal Auto Show in 2022, public-health conditions at the turn of the yearly calendar permitting of course. Details of the event’s schedule and information regarding ticket sales will be announced later this month. It goes without saying that visitors will have to present proof of vaccination to gain entry to the event.

A survey conducted by show organizers revealed that 86 percent of past attendees were likely, very likely or certain to return to the show when it is next held. That same poll also showed that, after the chance to see new models, the biggest attraction of the show is its Electric Zone devoted to electrified vehicles of all shapes, forms and sizes.

Report from the 5th Montreal Electric Vehicle Show: The F...

The Montreal Electric Vehicle Show broke attendance records this weekend for its 5th edition, and we can expect new records in the coming years. Here's a rep...

It’s déjà vu, all over again: both the Montreal and Toronto auto shows have once again been cancelled, this time due to the rapid spread of the Omicron varia...

The Montreal and Toronto auto shows are still scheduled to go ahead in January and February, respectively, but the Omicron variant is forcing everyone to kee...