For a long time, car racing was an all-male affair, with only the vanishingly rare exception. In recent times women have started to gradually break through in various series, both here and abroad. Canada has seen quite a few grab at the opportunity to show their talent, but none of those pioneering women had to date managed to win an overall championship in a Canadian circuit racing series.

Until now. Last weekend during the Nissan Sentra Cup Fall Classic at Circuit Mont-Tremblant, Valérie Limoges finished high enough in the last two races of the season to maintain the lead she had built up in the championship to be crowned 2022 series champion.

“This is a very big moment for me. I'm very happy with this title and especially with the consistency I was able to show all season - it's the key to my championship success. I also hope this title inspires other women to come to the series and to motorsport in general. As for me, I would really like to be back next year in the Nissan Sentra Cup to wear the number 1 on my Sentra/Groupe Gabriel et Total Quartz.”

That consistency was clearly one of Limoges’ great strengths during the season. When you look at the events and results, she was always in the top positions. Valerie Limoges also possesses a very important quality in racing: she usually gets her car to the finish line without damage. It’s a truism that in order to be successful in racing, you first have to ensure you can finish your races.

In the two races of the series’ last weekend, Limoges battled to finish second and third respectively to secure the title, collecting 482 points for the season compared to Simon Charbonneau's 479 and Alexandre Fortin's 417.

Now Valérie Limoges gets to experience something altogether new: defending her title. The 2023 season of the Nissan Sentra Cup will start in May. 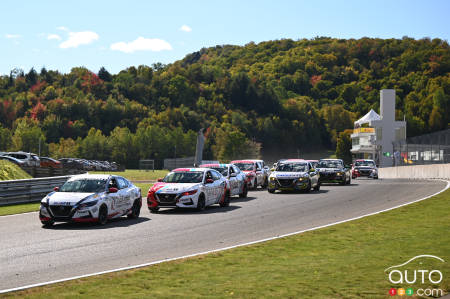 As reported last week, the Nissan Micra is back in Canada. The new Japanese subcompact officially made its debut yesterday at the 2014 Montreal Auto Show.