Time for a bit of word association. Reliable mid-size sedan? A lot of folks will answer the Toyota Camry before any other. Indeed, since 1979, year of its introduction in Canada, the model has been the best-selling midsize sedan in the world with nearly 20 million units sold.

Today, there are more than 12 different variants of the Camry to choose from, including gasoline-engine-only models, hybrids, with AWD and without, etc. And on top of that there are two letters to remember: L and S. The L-series models emphasize the sophisticated, comfortable and luxurious side of the Camry, while the S-series models deliver something a little sportier.

During the Christmas holidays, we had the opportunity to drive a 2023 Toyota Camry Hybrid SE for two weeks. By the end of it, we’d racked up almost 1000 km, mainly in the city. 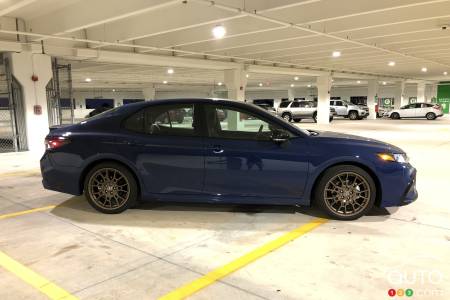 What's new?
Since its last redesign in 2018, not much has changed for the Toyota Camry. For 2023 a Nightshade package with the SE trim has been added to the catalog. This adorns the car with black rear spoiler, mirror caps and door handles for a more aggressive look. You also get 19-inch bronze wheels that go nicely with the three available colour choices, Midnight Black Metallic, White and Reservoir Blue. For an extra $2,300 on the SE trim, you can "dress up" your Camry as a sports car. 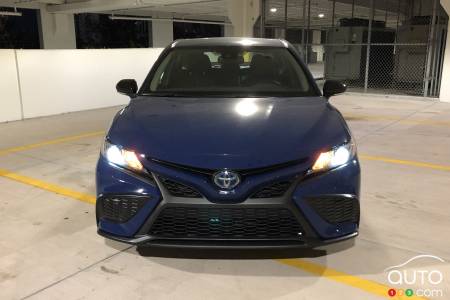 The drive
Out in the world, the 2023 Toyota Camry Hybrid is no different from previous versions. It offers a smooth and comfortable ride while remaining reassuring on the road. The car is responsive and easy to manoeuvre. Whether at low speeds, on curvy roads or during highway cruising, the Camry feels glued to the asphalt. If you need to pass, a flick of the throttle and the 208 hp will get you up to speed right away. When called on, the brakes are efficient at brining the vehicle to a quick stop.

Since it's a hybrid vehicle, there's no need to worry about electric range. Just stop by the local gas station to fill up and let the system manage the fuel-efficiency question. During our test drive, we left the car in Normal mode and didn't worry about which engine mode to choose.

In daily driving, the gasoline engine is activated to move the vehicle, but also to generate energy for the battery. Once the batteries are recharged, the electric drive mode takes over. The beauty of this hybrid vehicle is that you can let it manage the two systems for optimal use so you can focus strictly about the driving. You literally forget that it's a hybrid vehicle and honestly, you quickly get a taste for the quiet ride, the quality and comfort of the interior and especially the great fuel economy.

The Camry Hybrid uses a 2.5L 4-cylinder engine that develops 176 hp and 163 lb-ft of torque. Two electric motors bring total output to 208 hp aided by a continuously variable automatic transmission (CVT). Non-hybrid Camrys are also available with AWD, but this transmission choice is not offered on hybrid versions. 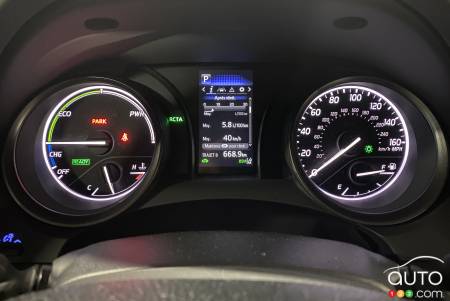 What's it like inside?
The interior of the 2023 Camry is nothing revolutionary, but it's well laid out, inviting and comfortable. The controls are easy to reach and there are all the essentials to make life easier. Access to the vehicle is easy from both the front and rear.

All models feature Apple CarPlay and Android Auto connectivity, and most are further enhanced with the Connected Services by Toyota package.

In the centre of the console sits a 9-inch screen that looks like it was just put there without much effort to integrate it into its surroundings. We’re still seeing that a lot in recent car designs, and it just feels like it can be done better. In fact, we have seen it done better, so it’s possible. 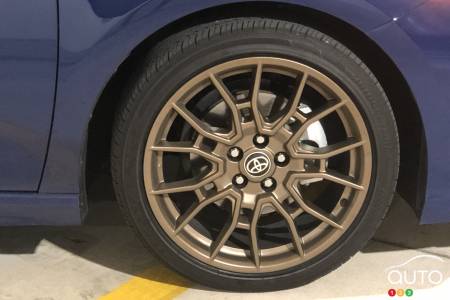 The exterior
As mentioned RE Toyota’s naming strategy, our SE model is a sportier version of the Camry. As such, it includes sportier front and back ends, a rear spoiler and 18-inch wheels. Our SE model had the NightShade package as well.

What caught our attention the most were the 19-inch bronze wheels instead of the 18-inch wheels of the traditional SE version. It seems a bit off-base to offer bronze wheels to a clientele that tends to the 45-and-up crowd. Black wheels like on the XSE would have been more appropriate. For our money, this option group can be left unchecked and the Camry's final result will be preserved.

Also, a little note about the hybrid versions: since the last redesign, Toyota has removed the hybrid badging on its models. The only way to know that it's a low-emission model is via the Toyota logo, circled in blue on these versions.

It's also worth noting that, although it's not official from Toyota, the indicators seem to point to a complete redesign of the model in 2024. 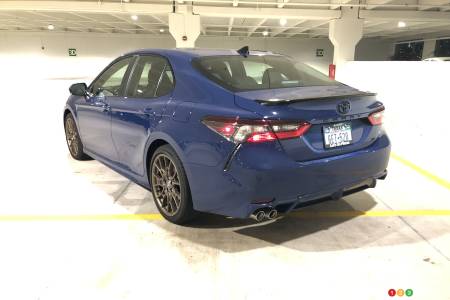 The 2023 Camry SE Hybrid features several active safety technologies, such as Lane Keeping Assist (LDA) that helps keep the car in its lane, Adaptive Cruise Control, and Forward Collision Avoidance System (PCS) that can automatically brake the car to avoid a collision. 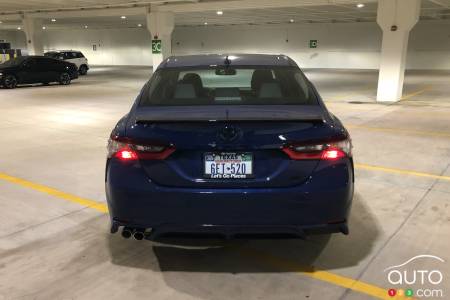 Which version of the 2023 Toyota Camry Hybrid looks the most interesting?
Auto123 definitely recommends a hybrid model for its fuel efficiency. The LE version at $34,824 offers the basics in terms of both equipment and engine. For the rest, you can use Apple CarPlay or Android Auto to enhance your multimedia environment.

Is the Toyota Camry Hybrid economical?
Officially, the hybrid version of the Camry consumes, according to Natural Resources Canada, 5.3L/100 km in the city, 5.0 on the highway and 5.1 in combined driving. During our road trip, which took place in summer-like temperatures, we achieved a fuel consumption of 5.6L/100 km by driving mainly in the city and 5.8L/100 km by doing a 50/50 city/highway. These figures are still very good for the vehicle category. 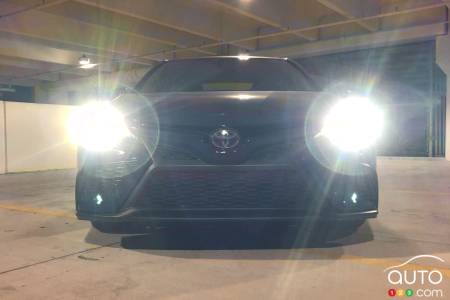 The final word
If you don't need an SUV and you don't need four-wheel drive, an energy-efficient sedan is an obvious choice. A Camry Hybrid, while far from being an exciting car to drive, justifies its existence at a very competitive price, delivering comfort, proven reliability, fuel economy and enough room on board to carry four people very comfortably. 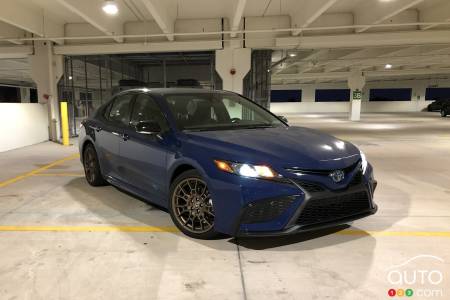 Articles By
Auto123.com
2024 Maserati GranTurismo: Three Screens for ...
Article
Lincoln Aviator PHEV Review: It May Come Down...
Review
The New Crop of Electric SUVs and Pickups: To...
Article
More from this author