The Canadian government presented its annual budget yesterday, and as befitting an election-year budget, there are a number of measures in it designed to appeal to the middle-class and other big voting blocs.

One of them is the return of a rebate granted for the purchase of a "green" vehicle, this for the first time in 11 years. This time around, the incentive will be offered on vehicles that are either electric or powered by hydrogen.

There is a catch, however; the suggested retail price of these must be less than $45,000. This is clearly a calculated choice being made by the government. Setting this price limit eliminates some of the most popular vehicles in this category, such as the Tesla Model 3 and the Hyundai Kona Electric. The two popular models are offered at $47,600 and $45,599, respectively.

A limit of $50,000 would have covered many more EV models, but it would also have cost the government more. In total, the government has allocated $300 million to Transport Canada for this new measure, which is relatively little considering the rapidly growing interest in EVs.

See our Guide to all-electric vehicles in Canada in 2019 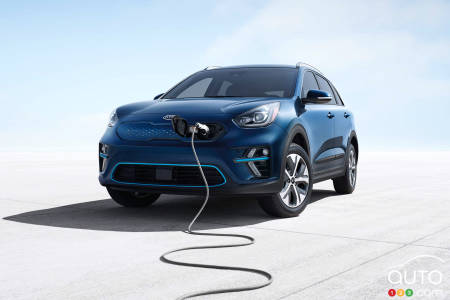 Residents of Quebec and British Columbia can forget about benefiting from up to $13,000 in discounts on purchase of a Kona Electric, after adding the provincial rebate currently in place there.

That ceiling does leave other choices, like the Nissan LEAF.

No date has yet been announced for the implementation of the incentive program, and we’re unlikely to see consumers stampeding to dealerships to make a purchase before learning more. We’ll have to wait and see how quickly the program is up and running, and whether that happens before the election in fall of this year.

It’s too early to tell whether this announcement amounts to more than election-year posturing. For one, the program could eventually encompass plug-in hybrid products as well. The government has not confirmed it, but reports are that this could happen.

One thing’s for sure, however; there will be lot of people watching what the government does in this dossier very, very closely.