The Lexus CT200h saw its journey, in North America anyways, end in 2017. But the head of Lexus Europe, Pascal Ruch, says the model will live on.
The company wants to maintain its presence in the hatchback car segment. Lexus is readying the launch of the UX compact crossover, which has been widely seen as the natural replacement for the CT, even though the latter is still available in a number of markets.

Speaking with British publication AutoExpress, Ruch mentioned that the CT plays a crucial role for Lexus, which is to introduce new buyers to the brand. In fact, 70 to 75% of CT buyers have never owned a Lexus before, and as Ruch pointed out, this does not represent the target market of the new UX. He added, “I believe that all the segments we are now in, it's important to stay there”. 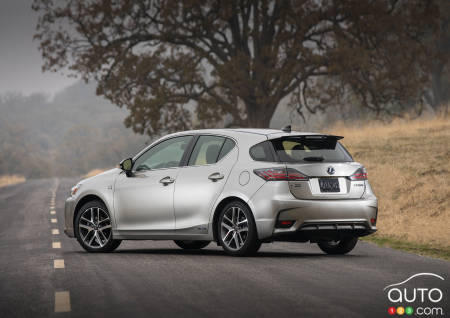 According to AutoExpress, a new CT version could be introduced in 2020 in both hybrid and all-electric formats. It would be built on the TGNA (Toyota New Global Architecture) platform. The new CT would possibly be offered as both a hatchback and a crossover, in the same vein as the Ford Focus and its Active variant. Pascal Ruch did say that Lexus would adopt a new approach with the CT as it evolves.

We’ll be watching developments regarding this model closely.

The First Electric Vehicle From Lexus to Debut at Tokyo M...

Lexus will present its first all-electric vehicle in concept form at the Tokyo Motor Show in October. It will lead to a production model that could debut nex...

Hyundai is not one to do things halfway, and the Korean automaker makes that crystal clear once more with the 2018 Hyundai IONIQ Electric Plus, the third var...

The Toyota Corolla Hatchback could well soon be offered in a high-performance hybrid version, but it’s not known if the model would be offered on the North A...

Articles By
Daniel Rufiange
2021 Hyundai Elantra Hybrid revealed in new i...
Article
Coronavirus: Catastrophic Sales in March for ...
Article
Is Toyota Working on a Corolla GR?
Article
More from this author