During a round-table discussion at the recent Los Angeles Auto Show, a top executive at Toyota confirmed that the company is considering producing an all-wheel-drive equipped Corolla in the near-future.

According to Autoguide website, Jack Hollis, general manager for Toyota  in North America, said that the company is well aware that consumers here are interested in benefiting from this type of technology, and is leaving the door wide open to introducing an AWD Corolla.

Toyota has already stated that it wants to grow its offer of vehicles equipped with hybrid systems. The Prius’s AWD-e system, which incorporates electric power and four-wheel drive, would meet two needs simultaneously for a model like the Corolla.

Toyota confirmed that it would be technically feasible for the new Corolla to integrate the hybrid AWD system. The Corolla hybrid unveiled in Los Angeles features a front-wheel drive system. As for the Corolla Hatchback, it does not feature hybrid technology, and for the moment Toyota has no plans to introduce it.

Meanwhile, the new Prius AWD-e unveiled in Los Angeles does get the system, which is also in use in the Lexus UX250h sold in North America. 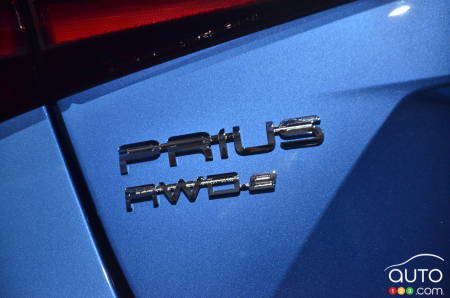 Toyota Corolla Hybrid: As Frugal on Gas as the Prius

The official fuel-consumption figures are in for the new hybrid version of the Toyota Corolla. The model will advance the same average combined city-highway ...

Here are the 10 models that grabbed our attention at the 2019 Montreal Auto Show… and that should be on your bucket list if you’re going to attend in the nex...

The four-wheel-drive Toyota Prius AWD-e, unveiled at the LA Auto Show, will go on sale in Canada in the spring of 2019. This week we learned details and pric...