The hybrid version of the Toyota Corolla made its public debut in late November at the Los Angeles Auto Show. We’ve now learned what the model’s official fuel-consumption figures will be, and they’re unsurprisingly excellent.

So excellent in fact that they’re virtually the same as those posted by the Toyota Prius. This is less a surprise than a reflection of changing realities, which could make life a little difficult for the pioneering Prius hybrid car. But will it?

The Corolla hybrid
The official fuel-consumption figure for the new variant is 4.5L/100 km when driving on the highway and 4.4L/100 km when in the city. Combined total from that comes to 4.5L/100 km. This represents a 20% improvement in fuel economy over the regular Corolla.

Compare this promised consumption total with the actual total of the Prius, and you see a tie. The Prius does have the edge with its Eco version, which comes in at 4.2L/100 km. 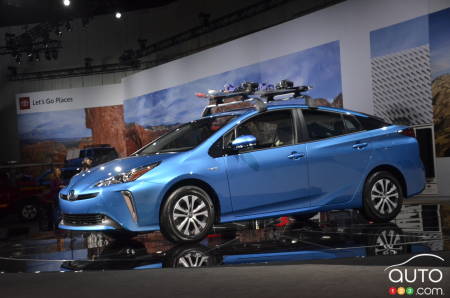 With fuel economy virtually identical, we can be forgiven for wondering what the future holds for the Prius, especially given the incredible popularity of the Corolla, nothing less than the best-selling car in history.

It may not be that simple, however. Toyota’s strategy with this greener new Corolla is to seduce consumers who aren’t crazy about the Prius’ odd looks. In the company’s view the two models won’t step on each other’s toes too much.

Ace up its sleeve
And there’s another element to consider, as we slip and slide and shovel our way through another Canadian winter: this year the Prius is being made available with all-wheel-drive. For the moment anyways, the Corolla can’t match that.

It does seem like Toyota’s done its homework to avoid one of its models cannibalizing another.

The final verdict, of course, will be delivered via the sales figures.

Toyota has attained quite an astonishing milestone, having just surpassed 15 million hybrid models sold. The Japanese manufacturer, a pioneer in the field, g... Finally, the Hyundai Santa Cruz Makes its Ent...
Article
Audi Q4 e-tron: The Luxury Counterpart to the...
Article
More from this author