In the spring of 2020, after only a few weeks of confinement, I purchased a 2007 Subaru Legacy GT SpecB to quench my thirst for the brand’s unique type of performance capabilities. Let’s be honest, the spiciest version of the midsize sedan from that generation is not - and never has been - a powerhouse, but compared to my more daily-use commuter, a Volkswagen Jetta City, this four-wheel drive sedan had (much) more potential.

After more than a year of ownership, this rather rare version of the Legacy still finds a way to put a smile on my face, not so much for its mind-boggling performance, but more for its overall efficiency. I drive approximately a hundred vehicles a year - some of them pushing the limits of physics - but every time I get behind the wheel of this old Subaru - with over 200,000 km on it, by the way - I appreciate its mechanical, more archaic feel.

Specifically, I love the sound of this boxer engine, the whistling of the turbocharger and its blow-off valve, the slightly less restrictive exhausts and these high-performance brakes added along the way, and this clear impression of driving an object that I control, an imperfect object that vibrates, that roars, that forces me to remain vigilant behind the wheel.

A new project
A little over a year after the Subaru purchase, I came across an ad for a 2004 Ford Ranger XLT, a single cab long box (seven feet) version equipped with a manual transmission, four wheel drive and the "big" 4.0L V6. After doing some research, I realizes that this trim is quite rare on the market. In fact, examples of the compact truck still in good condition are quite hard to find. Ford discontinued this generation of the Ranger in 2011 and many owners of the little pickup don't hesitate to use it daily for work.

I couldn't pass up such an opportunity, so I added this old pickup to my modest fleet.

The Ranger had new off-road tires, but they were oversized, which was far from ideal, even if the only time that got annoying was at low speeds, with the tires rubbing in the front when the wheels were cramped. Like I said, it wasn’t a huge issue, but I wanted to give the truck correctly sized tires. And so I, first passing on its tires to another truck lover via an online ad. 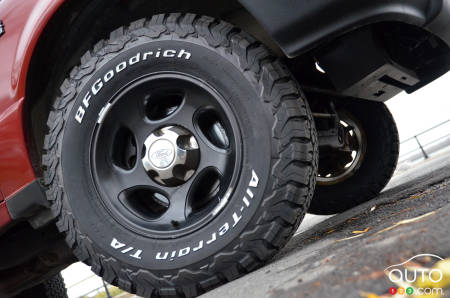 And why not four-season tires?
Given the limited use I was going to make of this truck, I decided it was a good idea to equip my new toy with four-season tires approved for winter use, namely to avoid changing tires twice a year.

But a scofflaw I am not. The presence of a snowflake on the sidewall of the all-season tire would allow me to drive with these soles during the cold season.

The mighty BFGoodrich T/A K02
I turned to BFGoodrich to see if a set of winter-homologated all-season tires was as good as (or reasonably close to) an authentic winter tire when the snow and slush and ice hit. The line of off-road tires it produces really doesn't need much introduction; BFGoodrich is known for its motorsport presences, including the famous Baja 500 event that features some of the toughest cars and trucks on the globe.

The BFGoodrich T/A K02 may not be as aggressive a tire as the lineup designed for such arduous driving in the Mexican desert, but it's meant to be capable of withstanding the treatments of an off-road course - at reasonable speeds - but also through the daily grind, around town, at the cottage - just about everywhere! 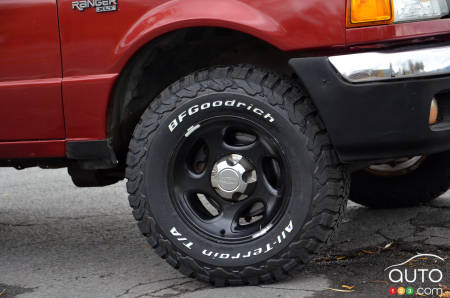 On dry surfaces
Since I bought it, my new-old Ranger did unfortunately spent a few weeks in the garage - the supply of parts has been more complicated since the beginning of this pandemic. Fortunately, I was able to drive my old pickup with its new tires.  Not only are they less imposing in the truck's wheel arches, but they also prove to be very quiet, despite their aggressive design.

I’ll admit it, the Ford Ranger isn't exactly the definition of a modern, comfortable and quiet vehicle. The older generation of the pickup has more in common with a tractor... and that's mostly what attracts me to this project!

Every time I get behind the wheel, I find a noisy, bouncy (when the box is empty) and poorly soundproofed vehicle. But I can at least congratulate myself for choosing these tires, as their quiet ride is really what struck me the first few kilometers, while the grip is not bad for a Ford Ranger. I'm looking forward to the return of warm weather though, as I didn't get to try these tires on warm asphalt. 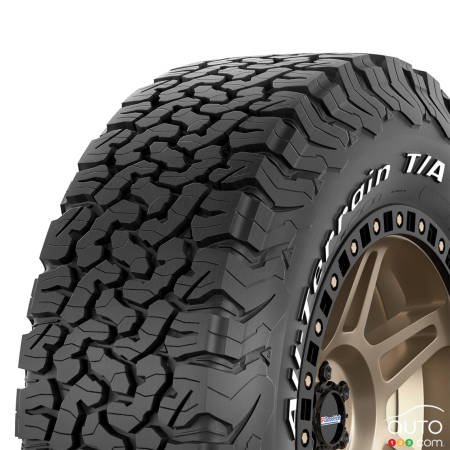 And in winter?
For now (and the upcoming weeks), the interesting part is to see if these four-season tires are as good as BFGoodrich claims. I'll be paying close attention to the performance of these K02s when the snow, ice and everything winter has to offer when it settles in for good... and it should be soon!

See you later this winter for a more detailed review of this winter-approved four seasons tire test. I look forward to telling you more about them… 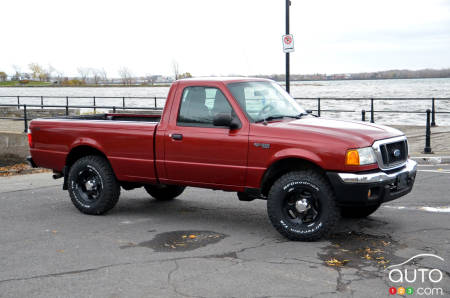