The Rolls-Royce brand is over a century old, having been founded in 1906. But in the late 1990s it required the help of a saviour, which took the form of BMW. Since 2003, the British firm has been a division of the German automotive giant.

The luxury carmaker has prospered over the past 15 years, and it recently made its first foray into the world of SUVs in the form of the Cullinan. But behind the rosy picture lie some harsh truths, as we recently learned. With the support provided by BMW, Rolls-Royce would almost certainly no longer exist.

This is not hearsay either. This was a declaration made by the CEO of Rolls-Royce, Torsten Müller-Ötvös. Speaking with Australian website Go Auto, he iterated his happiness at being part of the BMW family, because otherwise "we would never exist anymore".

For one thing, BMW’s resources mean that Rolls-Royce is no longer forced to go it alone in meeting the various norms that exist across the industry. But more importantly, it can borrow some of the parent company’s technologies and innovations, for example those to do with the electronics and multimedia systems. Doing this allows the company to then focus on doing what it does best: making highly luxurious interiors and paying attention to the tiny details to please its demanding clientele.

No clones
Torsten Müller-Ötvös took pains to add, however, that this doesn’t mean Rolls-Royce vehicles are mere BMW models dressed up in their Sunday finest. He cited the Cullinan, which is no clone or even a close cousin of the X7. In a nutshell, Rolls-Royce focuses on all the elements that the vehicle’s occupants can see, touch and feel. For example this means that the Cullinan doesn’t borrow a BMW-devised engine, but rather gets the famous 6.75L V12 that’s been around forever.

Meanwhile everything to do with electrification and autonomous driving is left more in the hands of BMW. The Rolls-Royce CEO added that, in any case, the brand’s clientele is not necessarily waiting impatiently for new technologies in that department.

The company will go ahead with incorporating these systems when they’re at maturity. The thinking is that a Rolls-Royce owner doesn’t want a car with automated functions if they have to closely monitor them. Torsten Müller-Ötvös added this:

"We are not selling a car here: we are selling a luxury good." 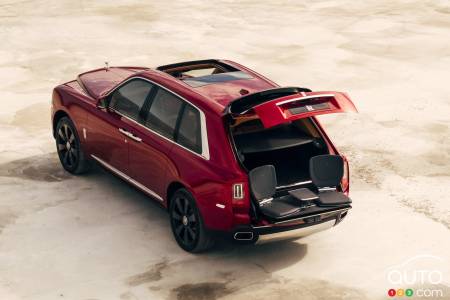 Rolls-Royce Offers a 1:8 Scale Replica of its Cullinan SUV

Rolls-Royce is offering for sale a 1:8 scale version of its Cullinan SUV. The replica, which requires some 450 hours to assemble, offers an impressive level ...

The first Rolls-Royce SUV in history made its official debut (in pictures) today. The Cullinan super luxury utility model can be yours starting at $325,000 USD.