As part of a wide-ranging series of announcements regarding its electrification strategy, General Motors (GM) provided some new information about Cadillac's future electric SUV, the Lyriq.

It was first announced more than a year ago when GM unveiled eye-catching sketches of the vehicle's interior and exterior at an investor meeting. These showed a very futuristic design, as well as a configuration that hinted at a third row.

Here’s what we know: The Lyriq will be based on a platform dedicated to electric vehicles, and equipped with a new type of battery that GM has named Ultium. The latter offers greater flexibility in terms of layout and will cost less to produce due to the sparser use of Cobalt than in other systems.

Also, GM is planning on different sizes ranging from 50 to 200 kWh, with the largest one capable of delivering a range of nearly 600 km. However, it's not yet known what battery sizes will be reserved for the Cadillac Lyriq. 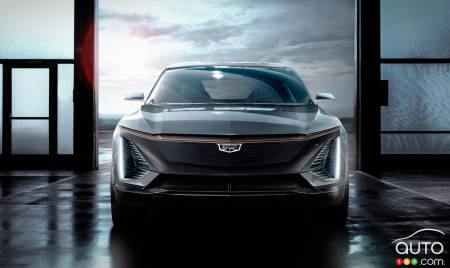 As for the new platform, it allows front-wheel-drive, rear-wheel-drive or all-wheel-drive configurations. Elevated performance will also be possible, of the kind that would translate into 0-100 km/h acceleration in 3 seconds. The platform and the new Ultium batteries will also constitute the basis of the GMC electric Hummer to be unveiled in May.

Although the Lyriq will be introduced in April, GM hasn't specified when the vehicle will actually be launched. We can expect a 2021 debut as a 2022 model, but that remains unconfirmed.