Chevrolet must be wishing today was April 1st. If it were, it could take the news of California and Washington State banning two of its models as a joke. But we’re the middle of December, and the banishment of the Chevy Camaro SS and ZL1 variants is for real. The reason for the move? The brake pads on the two models contain too much copper and could cause harm to aquatic life.

As it happens, copper is toxic to many living organisms, and although obviously fish won’t likely be eating vehicles’ brake pads, the dust generated during braking (sometimes spotted on tire rims) can and does end up contaminating rivers and other bodies of water, posing a threat to the creatures in them.

Which brings us to the SS and ZL1 versions of the Camaro, which contain more than 5 percent copper and therefore fall under the ban. The other versions of the model will remain available. Dealers must stop taking orders, but they can still sell the models they still have in stock. 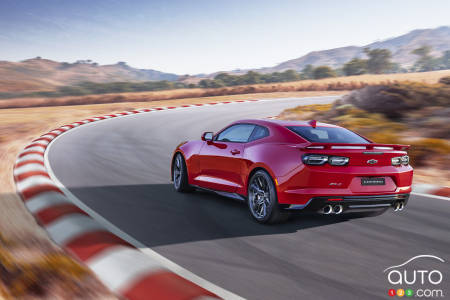 Chevrolet plans to reintroduce the Camaro SS and ZL1 variants for the 2022 model year. Chevrolet will work with its suppliers to design high-performance brake pads that meet regulatory requirements.

“We will resume allowing customers in California and Washington state to order the Camaro SS, ZL1 and 1LE models in 2022 when we introduce a new brake system that is compliant with the copper requirements,” explained Kevin Kelly, General Motors spokesman, in a statement sent to the GM Authority website.

Brake pads are not the only source of pollutants that harm marine organisms. According to scientists, a chemical called 6PPD, used in many tires and carried into rivers by rain, is responsible for the deaths of silver salmon along the Pacific coast. In 2019, researchers measured microparticles and microplastics in rainwater from 12 small tributaries in the San Francisco area and found that nearly half of them were black with a rubbery texture. "One potential source of these particles is wear and tear on vehicle tires," the study concluded.

Though environmentalists argue otherwise, major players in the tire industry maintain that these particles do not pose a significant risk to humans and the environment. Nevertheless, legislators are considering subjecting tire manufacturers to stricter regulations.

Two Old 10-Door Chevy Suburbans Being Auctioned Off... in...

Two old Chevrolet Suburbans are for sale... in Japan. Oh, and they each have 10 doors. Both models are rarities and were designed at the time to be used as a...