The Guangzhou auto show is in full swing this week in China, and though it’s taking place on the other side of the world, certain of the new models being displayed there are of close interest to us, as they relate to vehicles that may be debuting here in the coming months and years.

A prime example is this FNR-Carryall concept from Chevrolet, which serves as a preview of the new SUV design signature the automaker is likely to affix to its models in the very near-future. We’d already gotten a foretaste with the Blazer SUV, set to debut soon, and this concept vehicle pushes the boundaries a little further. In fact we wouldn’t be surprised to see the contours of the next Chevrolet Traverse be strongly influenced by the concept presented this week in China.

And that rather unorthodox name given the prototype? The explanation is simple: the FNR letters stand for Find New Roads, Chevrolet’s most recent slogan. As for the Carryall name, those familiar with the brand’s history may know that, back in 1935, the automaker launched the Carryall Suburban, a vehicle that was in a sense the first SUV in automotive history, with its wagon frame mounted on a truck chassis.

As for the styling, if you’re seeing a certain resemblance with the Camaro, you’re not hallucinating; the split headlights and large air intakes are definitely inspired by those on the nose of the iconic muscle car.

Chevrolet is clear that this concept’s look represents the new design signature of the brand’s models going forward. The FNR-Carryall will even be made as an RS variant, which explains the presence of 22-inch wheels, an air vent on the hood and Brembo brakes.

The interior holds three rows of seats, which only strengthens the ties that bind it with the future Traverse.

As always, we’ll have to wait to see how many of the concept SUV’s lines and design elements survive the transition to an eventual production version. For now, though, the approach is an interesting one… 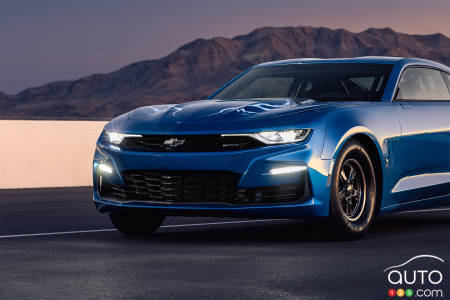 Chevrolet has made a major commitment to providing world-class, fuel-efficient vehicles to its customers around the world. In recent months, through GM's Sha...