The race is on across the automotive industry to produce electric-powered pickup trucks. The biggest splash in this potentially very profitable new pool has been made the recently introduced GMC Hummer, but right behind it are the models being developed by Rivian, Ford and Tesla.

And there’s Chevrolet, of course, as we know that the company is working on developing an electric variant of its Silverado model.

The official presentation of the Silverado isn't scheduled for any time soon, but during an online marketing presentation posted the company, it appears the vehicle made an early appearance in the background.

What’s interesting at first glance is that the pickup seen in the video does not appear to simply an electric copy of the current Silverado. Its front end is lower and more rounded and is accentuated by a grille that adds a 3D element to the presentation. The Chevrolet logo appears on a horizontal decorative element that connects the headlights.

As the EV is not expected for a few years, it’s also possible that what we’re seeing is a preview of the next-generation Silverado’s styling and design. 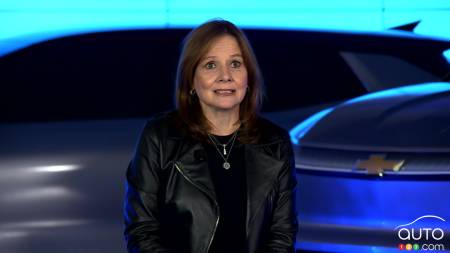 The wheel wells are cut out and covered with black plastic. We also note the lack of visible separation between the cab and the box. In this regard, the sides of the body rise towards the rear window, instead of offering a 90-degree angle. The approach is reminiscent of the GMC Hummer, as well as the first-generation Honda Ridgeline and even the now-defunct Chevrolet Avalanche.

Of course, it's presumed the glimpsed model is the future electric Silverado, but no confirmation has been given by General Motors (GM). A way to titillate us? Probably.

All we know for now is that the pickup will offer a range of between 500 and 600 km. We guess it will share a lot of components with the GMC Hummer, which is designed to accommodate one, two or three electric motors, as well as GM's Ultium battery technology. As a result, we can expect a varied model range, not a single offer.

Which should make consumers very happy.

Patience is in order, however, because the model may not show up until 2023 as a 2024 model. This new, cleaner Silverado is one of 30 electric vehicles that General Motors says it’s committed to offering worldwide by 2025. GM CEO Mary Barra said the move to electric mobility will cost about $27 billion.

The Electric Silverado Pickup Will Debut at CES in Las Ve...

General Motors announces it will unveil the electric version of its Silverado pickup truck at the upcoming Consumer Electronics Show in Las Vegas, to be in e...

The electric Chevrolet Silverado will benefit from a four-wheel directional system. This is the most recent information shared by the company about its upcom...

A sketch shared by General Motors' design department shows an early conception of what the future electric Chevy Silverado pickup truck might look like. If t...