When Chevrolet announced the arrival of the Trailblazer, many believed the small SUV would simply replace the Trax in the lineup. But that's not what happened, and in fact, even with the Trailblazer sitting next to it in showrooms, the Trax continues to sell well.

What we see so far with the Trailblazer is the coexistence of two models that complement each other. The Trax appeals to budget-conscious small-SUV buyers, while the Trailblazer is drawing in consumers wanting a little more luxury. Which makes for fascinating speculation as to how long the models can coexist. For now, the Trailblazer is still only taking its first steps, so it’s hard to draw many conclusions.

However, according to the GM Authority site, General Motors will soon begin to reduce production of the Trax. Sources familiar with product planning at GM say that production will be reduced by 30 percent in 2021 compared to 2020. Unsurprisingly, Trailblazer production will be increased.

This is hardly shocking, considering that the latter model is newer and more profitable for the company. Also, the demand for the RS variant of the Trailblazer is more than double what GM had initially anticipated, suggesting a promising future as the model continues to make its mark and gain recognition.

As for the Trax, it will be interesting to see what effect the drop in production will have on the availability of the model at dealerships. While in the short term the model is present in sufficient quantity in dealer inventories, the production cut could make it less readily available over time, which most likely will, eventually, impact sales.

GM Authority wonders aloud whether the automaker, by taking such steps, might not simply want to quietly make the Trax disappear; it’s a theory that makes a lot of sense. For the moment, everything remains at the rumour stage, but this will be something to watch out for in 2021. 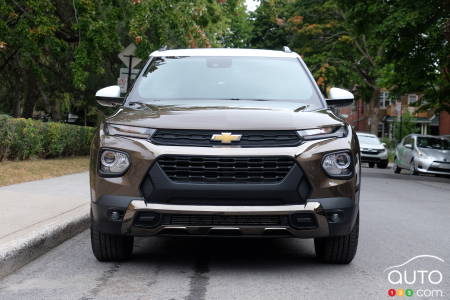 GM’s Buick Encore, Chevrolet Trax Heading for the Exits A...

It appears 2022 will be the last year for the Buick Encore and the Chevrolet Trax, according to reports. This was to be expected with the introduction in the...