In 2022, there's a lot of talk about electric vehicles, hybrids, fuel-efficient vehicles and whatnot. There’s a little less talk about big vehicles with big engines, that consume a lot of gas and are not particularly friends of the environment, shall we say.

And yet, the market for these types of vehicles remains huge. There are many consumers - mostly with families - who prefer wheeled behemoths parked in their driveway. And in the luxury game, where once the big-boat sedan was king, today it's the big SUV that casts shade on the others.

And when it comes to casting shade, the Cadillac Escalade and Lincoln Navigator are almost unbeatable. Here are two very big SUVs that will come in handy if you have to haul say four kids and a dog or two, as well as pull a boat or a trailer, or even both while you’re at it. Why not.

Here is a small overview of two giants. 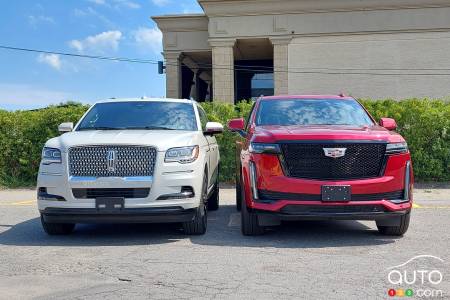 First off, know that these SUVs are actually derivatives of other popular mass-market models. The Lincoln Navigator is in essence the luxury version of the Ford Expedition, while the Cadillac Escalade is a more affluent relative of the Chevrolet Tahoe. As a result, both are relatively well-known quantities. 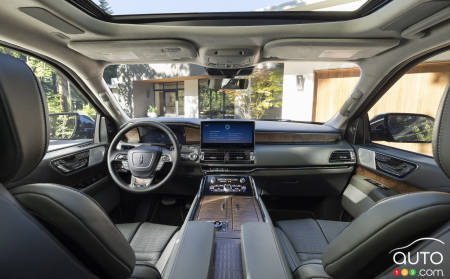 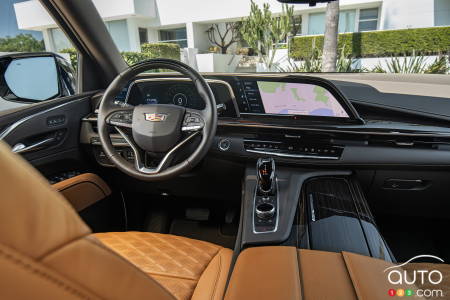 The two interiors are distinct, except for the fact that in both cases, you can arrange the interior to your liking. However, there’s more latitude with the Escalade than with the Navigator, which comes in a single version. Both can accommodate seven occupants in their most luxurious versions, but if you take the Escalade at its most stripped down, you can select a second-row bench seat instead of captain's chairs.

Up front, the two vehicles are diametrically opposed. In the Navigator, the screen above the centre console, the piano shifter and the climate control selection are less fully integrated into the space.

In the Escalade, the screen and various controls are fully integrated into the console and not just dropped there as if no one quite knew where to stick them. Only the shifter and knob feel not in their rightful place. 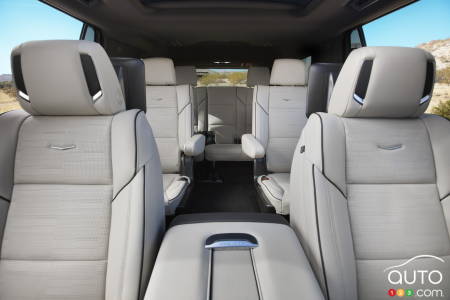 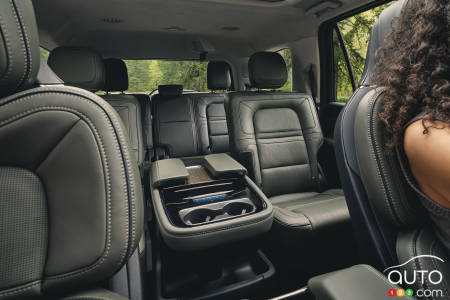 In back it’s the opposite, the Cadillac coming up a little short compared to the Navigator, in which the space is very well arranged. The Lincoln’s seats have been designed to offer the luxury and comfort that is required in this type of vehicle. The seats are heated and ventilated, whereas in the Escalade they are just heated.

However, if you are a technology lover, the Cadillac will certainly satisfy you. The Escalade is loaded with tech equipment, not to mention the semi-autonomous navigation system, more on which in a bit.

Finally, trunk space is impressive in both behemoths, with the Escalade offering 700 liters behind the third row compared to the Navigator's 600 liters. With the second and third row seats folded down, there are 2,900 liters available in the Lincoln compared to over 3,400 liters in the Cadillac.

As for towing capacities of the two vehicles, we’re talking about 3,629 kg with the Escalade and 3,765 with the Navigator. Both vehicles are capable of towing their own weight. 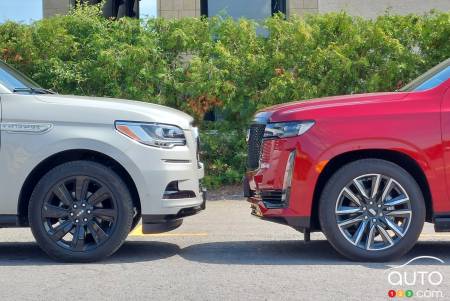 Lincoln, which used to use V8s, now only offers a V6. This twin-turbo engine generates 450 hp and 510 lb-ft of torque and is a blast when you’re at the wheel. We previously had occasion to test this engine in a Ford Expedition on a trek between Montreal and Toronto and the power it delivers is simply phenomenal.

The Cadillac's V8, with its 420 hp and 460 lb-ft of torque, has no trouble propelling the 2,600-kg truck to high speeds either. The only downside is that at highway speeds, the engine revs up to 1,500 RPM, which is fine, but the V8's thumping sound is omnipresent inside the cabin. Even when playing with the different options to lower the exhaust sound as much as possible, which can be adjusted as needed, we were not able to evacuate that sound from our consciousness.

Both the Escalade and Navigator use a standard four-wheel drive system in tandem with a 10-speed automatic transmission that was co-developed by the two manufacturers. 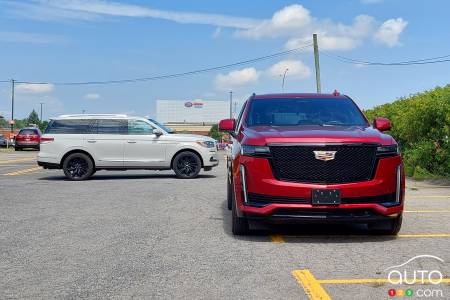 However, where the two behemoths surprised us was in town. We found fuel consumption levels of around 15.0L/100 km in both cases; we were expecting much more, given the weight and displacement under the hood.

With both vehicles costing over $100,000, you can expect a lot of bells and whistles, including safety systems. And indeed, there are many.

Both vehicles are equipped with a multitude of sensors to mitigate collisions with automatic front and rear braking, lane keep assist and a myriad of cameras to provide every possible view.

An optional active infrared night vision system on the Escalade helps drivers more easily detect people, animals or other objects in front of the vehicle at night by projecting them onto the centre instrument cluster screen. 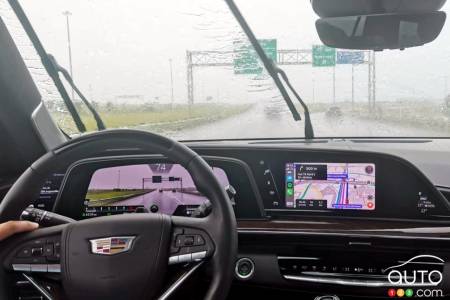 A picture being worth a thousand words, here’s what we could see through our windshield and what the augmented reality cameras could see. Basically, through the windshield, it was impossible to see further than 50 m; the camera showed a perfectly clear view up to 200 m. Someone remarked that being able to look at the camera instead of the road through the windshield gave them far more confidence driving around in this pouring rain.

I don’t know that I would ever recommend looking at a camera image than the real thing, but I could see their point. 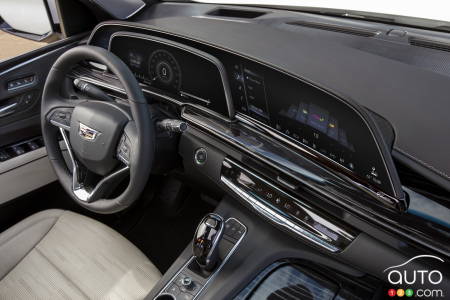 A word about semi-autonomous driving. The Super Cruise system, which was upgraded in 2022 with the automated lane change function, allows the vehicle to take full or partial control of driving on the highway.

Similar to hands-free driving, the system uses different technologies and effectively allows you to let go of the steering wheel for long periods of time on the highway. But take note, this doesn't mean you can have a snooze while the vehicle is in charge!

On the contrary, the system keeps an eye on you. We tested it with sunglasses on and off, and the system knew if we were focused on the road or looking elsewhere. Unless you sleep with your eyes open and look straight ahead, you won't be able to avoid its attention.

However, we took some issue with the automatic lane change function, and in fact we deactivated it after 100 km or so, because we were not comfortable that it was deciding on lane changes all on its own. Even if there is an alert that sounds if there’s a vehicle in the way. We just preferred that it be up to us to decide when to change lanes. To do that with the Super cruise on, we just had to press the right or left turn signal and the vehicle would change direction at our request.

Another downside of the new function is that on a three-lane highway, if you decide you want to stay in the right lane whilst in automatic lane change mode, the system will tend to put you back in the middle lane. 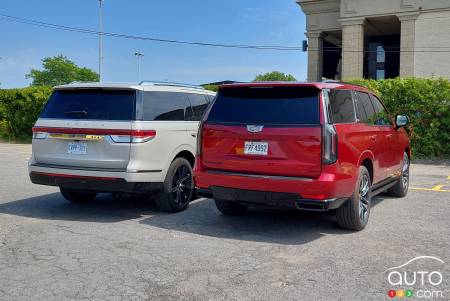 The Cadillac comes with a lot of stuff, and there’s a bottom-line cost to that. The starting price for a base Escalade is $93,148. You can choose between two engines, gas or diesel, and no fewer than five trim levels. Our fully loaded version was more like $130,000.

For the Navigator, it's not complicated, there's just one price ($108,300), one engine and one version in the catalog.

If you’re considering a base model of either of these SUVs, you might want to consider looking at a fully equipped GMC Yukon Denali or Ford Expedition. But if you're looking for luxury and all the latest equipment, then the Escalade and Navigator will certainly meet your expectations.

Other competitors
Otherwise, the European competition is serious in this segment, however we’re dealing with aging products. BMW's X7 is already a few years old (a new one is due in the coming months) and while it has a more powerful V8 engine than our two Americans, the interior is more cramped. The Mercedes-Benz GLS is in search of lost space, and its aging interior places it behind our two Yanks. At Audi, the Q7 is not to be considered at all, frankly, as it’s far off the pace when it comes to engines, space and on-board technology.

The all-new Jeep Grand Wagoneer is a serious alternative. It offers the V8 engine, the space and the technology to compete with our two protagonists on their ground.

Finally, there's the new Lexus LX600 with its redesigned V6 that offers 409 hp. Its interior is gigantic and if you're looking for luxury, it offers a VIP executive version that, for $154,440, offers you a princely automotive experience. 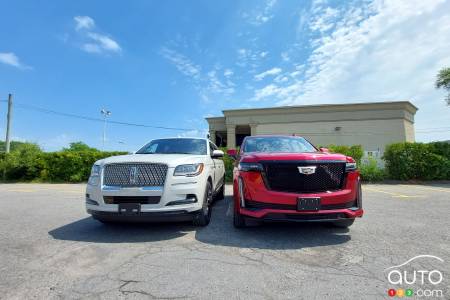 Although they’re similar in class, size and function, the Cadillac Escalade and Lincoln Navigator are still very different. The Lincoln Navigator has a wonderful engine, and it takes care of its rear passengers and offers them even more space than in the Escalade.

The Cadillac, on the other hand has the tech advantage and delivers a more comfortable ride.

Overall, we give the nod the Escalade on the strength of the drive, the comfort level and especially the on-board technology. On the open road, the Super Cruise was really a great ally and helped make our trip much less tiring. 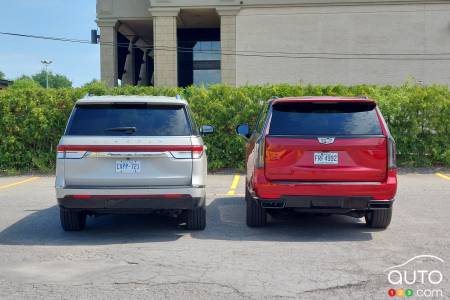