Until December 2, Americans can submit a name for the new model Automotive columnist: Daniel Rufiange , Updated: 2022-11-25

•    Jeep has launched its contest to find a name for its new electric model.

•    That SUV was introduced last summer as the Wagoneer S.

Last summer, Jeep held an online presentation to reveal several all-electric models coming to its lineup of SUVs in the coming years. One of those models is going to be produced only for Europe, but the other two are coming to the North American market.

One will be named the Jeep Recon, but for the other model, Jeep wants the help of consumers, in the form of names submitted via a contest. Since yesterday and until December 2, folks can participate via a Web page provided by Jeep to suggest a name for the next model, known for the moment as the Wagoneer S.

There’s an extra incentive as well. Whoever submits the winning name earns a prize worth $40,000 US. Unfortunately, that person won't be Canadian or a non-US resident; the contest is reserved for our neighbors to the south.

Which is a crying shame.

The procedure for submitting a name, calls for participants to fill out a form providing the name of their choice, with a maximum length of 50 characters. 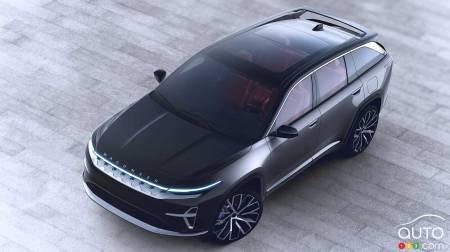 Photo: Jeep
The new electric Jeep, from above

Both this new model and the Recon, which is an electric SUV inspired by the Wrangler, are expected to go into production in 2024. The new vehicle will sit on the manufacturer's STLA platform, and Jeep it should be good for 600 hp, a 0-100 km/h time of 3.5 seconds and a range of some 640 km.

Other configurations will be offered as well with different performance specs and, we assume, pricing. Reservations for the model will be possible from the beginning of 2023. The model could well be seen at the CES (Consumer Electronics Show) in Las Vegas at the turn of January.

We'll get back to you with the name that is ultimately retained. That announcement could come at CES, after Jeep has had time to compile the results and choose a winning name.

Subaru Is Taking Online Orders for the 2023 Solterra in t...