Car theft has been around as long as cars have, and despite all the latest attempts to put a stop to the practice, those engaged in it are always looking for new ways to get what they’re looking for.

And what they’re looking for above all else, according to newly published data, is high-horsepower American cars. A recent study by the Highway Loss Data Institute in the U.S. reveals what the most – and least popular – models are for thieves.

The Dodge Charger Hemi and Dodge Challenger Hellcat are the hottest items, in fact these models are five times more likely to be stolen than the average vehicle. Oddly, Infiniti’s Q50 sedan is not far behind. Closing out the top five for attractive targets for theft are the Infiniti QX80 SUV and GMC’s Sierra 1500 pickup.

There are surprising results at the bottom end of the list as well. The least-stolen car? BMW’s 3 Series. In a blog commenting on the results of the study, the IIHS (Insurance Institute for Highway Safety) mentions that out of 104,901 currently insures 3 Series cars, only one was reported stolen. 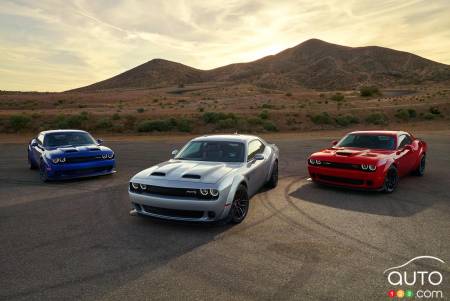 Other vehicles that seemingly leave car thieves cold are Tesla’s Model S and Model X. This is less of a surprise, because often the motivation behind vehicle theft is to resell mechanical parts from them.

Lastly, the Cadillac Escalade, once a favourite target for theft, has fallen sharply on the list. According to the IIHS, this is possibly due to the inclusion of more-advanced anti-theft systems that are helping discourage would-be thieves.

There’s no doubt that the level of anti-theft protection a vehicle benefits from impacts the likelihood they’ll get stolen. So while it’S easy to see why the Charger and Challenger Hellcat would generate interest, the fact that neither has been updated (for instance with new equipment to deter theft) since 2011 likely explains their position at the very top of the car-theft hit parade.

If you’re wondering, the most popular target for Canadian car thieves last year was the Ford Super Duty truck, versions of which took up 9 out of the top 10 positions; most dated between 2000 and 2007.

A New Security Mode for the Dodge Charger and Challenger

Dodge has developed a new security mode for Charger and Challenger models to protect them from theft. It will limit the power of the 6.4L and 6.2L V8 version...