In 2019, Toyota promised the world six new electric vehicles in the not-so-distant future. Recently, we learned that the presentation of the first of those models was approaching fast. Finally, the company was going to begin to make up for the late start it got in the domain of all-electric vehicles.

One thing we did not know, however, was Toyota’s naming strategy for its future lineup of EVs. This week we learned that the automaker has filed to trademark the BZ1, BZ2, BZ2X, BZ3, BZ4, BZ4X and BZ5 names, all registered under the Toyota BZ family. We’re guessing that the models with the X suffix will be used to designate a multi-motor, all-wheel-drive configuration. The letters BZ themselves stand for Beyond Zero, which is how the company named its initiative that aims at developing and promoting various “zero emission” technologies such as electric vehicles and hydrogen fuel cells.

The platform that will receive these new products is called e-TNGA (Toyota New Global Architecture) and is the result of a partnership between the Japanese giant and its partner Subaru.

The use of the BZ letters is understandable and clear enough, but it doesn’t exactly make for a memorable, seductive nomenclature for Toyota’s future EV roster. Not that they’re that much more riveting elsewhere: there’s ID at Volkswagen, EV at Kia, i at BMW, EQ at Mercedes-Benz, and so on. 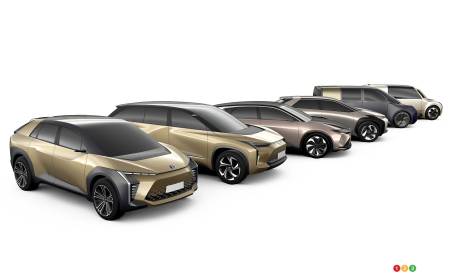 Toyota is making no official comment for now regarding the reports of the BZ strategy.

The first all-electric Toyota will be a compact SUV in an RAV4 format. It will be unveiled at the end of this month for the European market. Eventually, we could see other body styles emerge, notably sedans, other SUVs and even vans. When the automaker announced its plans, it previewed the six vehicles and we could see that they were in various shapes.

Meanwhile, Toyota's luxury brand, Lexus, says it will have an electrified version of every model it sells by 2025. It recently gave a preview of its future electric models with the LF-Z concept.

Incidentally, Toyota confirmed yesterday that the LF-Z concept will be unveiled at the Shanghai Motor Show, which takes place from April 21-28.

The next thing on everyone’s brains will be what models make it to our market. Stay tuned. 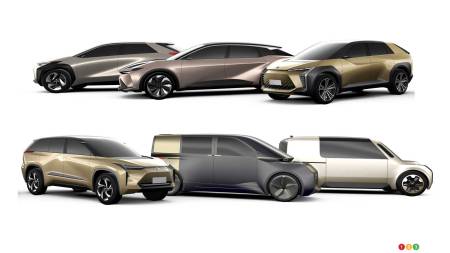