The plug-in hybrid version of the Ford Escape was originally due to debut this fall, but we learned recently that the company was pushing back production until 2021. The reason was unclear, but now we know that that the delay is due to issues that have affected the company’s similar Kuga model in Europe. Specifically, there have been several reports of fires on board that PHEV.

The original spring start date for production of the Ford Escape PHEV was pushed back to summer due to the pandemic and the factory closings it caused. Then it came out that production would not start before 2021, and now we know that’s because Ford wants to sort out the precise cause of the fires in the European-market Kuga. That model shares core components with the Escape PHEV, including the battery and motor.

“We’re moving production to next year while we investigate what happened to the Kuga in Europe. None have been sold in the U.S.”

The current generation of the Escape has been assembled at Ford’s plant in Louisville, Kentucky since late last year. Only regular-gas and hybrid versions have been built to date.

Demand for the compact SUV has been weaker than hoped since Ford rolled out the new edition.  U.S. sales plummeted by 23 percent during the third quarter of 2020 and are down 32 percent year-to-date. The situation is roughly the same in Canada.

“We have some availability problems (with the new Escape). We’re managing those vehicles for long-term health from a residual-value standpoint and not highly discounting the, compared to the previous generation.”

Another Ford spokersperson, Jay Ward, declared that Ford Europe is currently working on a solution for the issue with the Kuga PHEV, which has been sourced to a problem related to the heat emitted by the batteries. There have been seven reported cases of fires in the Kuga in Europe, which has led to the recall of 20,500 models sold on that continent. Realistically it could take months to resolve the issue, and so Ford has made the prudent decision to hold back on production of the Escape PHEV. 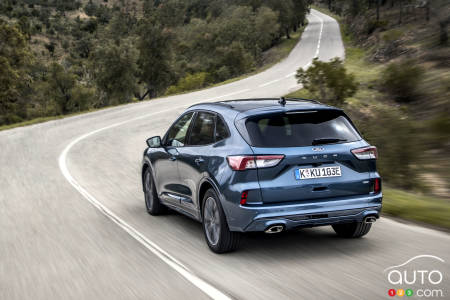