For reasons that remain somewhat unclear, the start of production of the plug-in hybrid version of the new-generation Ford Escape has been delayed, to the point where Ford now says it will start assembling the PHEV only after the flip of the calendar. The January 2021 production start target was reported today by Ford Authority website, which spoke with Ford spokesperson Mike Levine.

While the 2020 Ford Escape PHEV won’t go into production until the new year, it will retain its designation as a 2020 model. Moreover, the company will start making it at the same time as it starts production on the regular 2021 Ford Escape. There’s been no single explanation for the delays regarding the PHEV, but you take you pick from among the pandemic, Ford’s busy release schedule lately (the Bronco, the 2021 F-150, the Mach-E, etc.), and both. We figure it’s the last…

Note: Ford Canada has confirmed to us that the Escape PHEV will finally be designated a 2021 model. According to Christina Hollander, Communications Manager for Ford of Canada, "mass production of the Escape PHEV has been moved to the 2021 model-year. The first plug-in hybrid Escapes will be sold next year".

Meanwhile, Lincoln is proceeding apace with production of the Corsair PHEV version, close cousin to the new Escape. It plans to start assembly of that model on November 9 of this year.

The Ford Escape PHEV is powered by the company’s 2.5L iVCT Atkinson-Cycle I-4, working in conjunction with a permanent magnet synchronous motor fed by a liquid-cooled, 14.4 kilowatt hour lithium-ion battery and a CVT transmission. Total output of the powertrain is set at 209 hp. 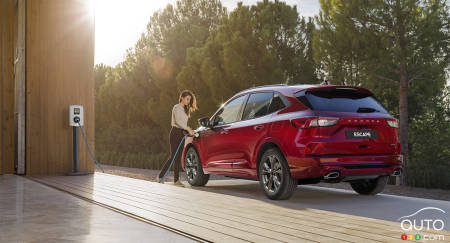