The history of the Ford Mustang is impressive in every way. There have been high points and a few low points, but through it all, its longevity has been something to behold. For those who might not know it, the model first appeared on April 17, 1964, exactly 57 years ago if we look ahead to next Saturday.

And the story continues of course; the model continues to mark the history of the automobile. Yesterday, Ford issued a statement announcing that its iconic vehicle has once again taken the title of best-selling sports coupe on the planet. That’s based on 2020 registration data compiled by research firm IHS Markit.

According to that data, Ford sold 80,577 Mustangs worldwide last year, and the automaker points out that’s good for 15.1 percent of the global sports coupe market. That's up from 14.8 percent the year before.

Even better, the Mustang inherits the title for a sixth consecutive year. 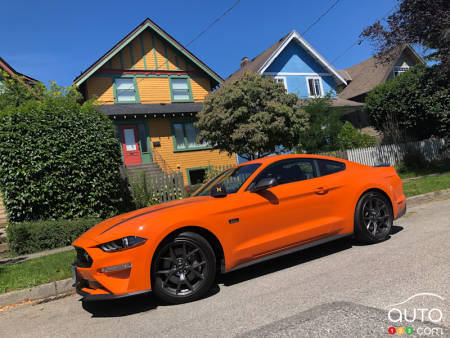 The Mustang also won the title of best-selling sports car for the second year in a row, according to Ford, but the automaker did not release specific sales figures for that market segment.

In addition, Ford reports that sales of the Bullitt and Shelby performance versions were up 52.7 percent in 2020 over the previous year. It will be interesting to see what direction this data takes as the company drops the Bullitt, Shelby GT350 and Shelby GT350R variants for 2021. Instead, it welcomes the Mach 1 to the lineup; the Shelby GT500 is still on the menu.

In its native United States, the Mustang was also the best-selling sports car for the sixth consecutive year, this time with 61,090 sales. This country remains the most important market for the Mustang, accounting for about two-thirds of sales, according to Ford. Texas (8,600 transactions), California (6,200) and Florida (5,864) were the territories where the most models sold, again according to Ford. Overall sales numbers, however, were down 15.7 percent from 2019, primarily due to the pandemic.

What's interesting is that we can see the success of Ford's strategy across the globe in hindsight. The Mustang that debuted in 2014, was the first to be offered by Ford on all five continents. Almost seven years later, that decision to go global has led to announcements like this by Ford: In Hungary, sales of the model increased by 68.8 percent in 2020 compared to the previous year. Other gains were recorded in the Netherlands (38.5 percent), Denmark (12.5 percent), the Czech Republic (5.6 percent) and Austria (4 percent).

None of this impressive growth was a given when Ford took its Mustang global in 2014.