Rumours of a third Ford pickup being in the works have been ebbing and flowing for months now. These rumours have intensified over the past few ways, to the point where the question now being asked is less if Ford will be going ahead with the project, and more when we’ll see the final product.

The other burning question, of course, is whether the model will be sold in North America.

We do know that the product has been in development for a few months now, and that Ford will begin real-world testing of the prototype in the coming months. As for the architecture that will underpin the third Ford pickup to join the lineup, it will be that of the new Focus, which won’t be sold in North America.

The new pickup will thus be a unibody construction with the engine mounted transversally in the front, with power being sent to the wheels on either side of it. We fully expect that all-wheel drive will be available as an option; for it to be successful in our market, it would be inconceivable for this not to be part of the package.

As for the name, there’s much speculation that Ford will revive the Courier nameplate it has previously appended to pickups. The most recent iteration was a model built on the Fiesta’s platform, and it was last sold in 2013.

The new Ford small truck is expected to be ready by 2021, and we’ll have to wait and see if North America is part of the plan for the model.

From where we sit there’s no doubt Ford could make a successful go of its here. Mid-size pickups trucks have gradually grown in size, to the point where the very definition of the segment is no longer the same. With a product that is really is still compact, Ford could reach a new clientele.

And with virtually no cars in its future in North America, this seems like a no-brainer for the brand. 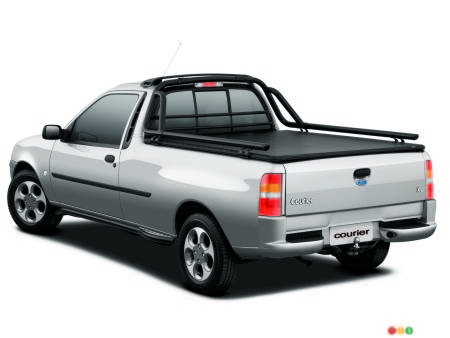 The future Ford Maverick truck could get a 162-hp engine and a manual gearbox option, and start life strictly as a 4-door pickup. According to the Maverick C...

A patent document indicates that Ford is working on a four-wheel steering for its F-Series trucks. The technology itself is not new, but it has never really ...