Sometimes flashes of genius come without anyone really realizing it. When Ford introduced the Lightning version of its F-150 pickup truck in the early 1990s, it certainly had no idea it would have the opportunity to use that name 30 years later for an electrified version of its flagship model.

But that's what could happen.

According to Car and Driver magazine, the company has decided to revive a name that has become somewhat legendary among pickup enthusiasts. In fact, it’s worth noting that two generations of F-150s carried it, between 1993 to 2004. The model was powered by a supercharged V8 and sported aggressive styling, oversized tires and Bilstein shocks. At the time, the car's 0-100 km/h time was close to 5.5 seconds, which was exceptional for a pickup truck.

Regarding the possible return of the name, Car and Driver cites a document provided them by an internal Ford source, who not surprisingly remains unnamed. The document in question refers to the F-150 Lightning name, as well as to the Mustang Mach-E and the E-Transit van. Ford is of course staying mum for the time being and is using the stock phrase so commonly used a lot in the industry: “We don’t comment on speculation about future products”.

One thing's for sure, the marriage between the Lightning name and an all-electric architecture is interesting... and fitting. And considering the performance levels that are often found in electric-powered models, the spirit of the original model would be preserved in a way - provided that it is equipped with a chassis that allows it to perform outsized feats of performance. 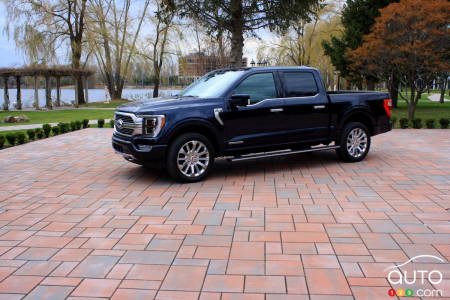 Ford boss Jim Farley has confirmed range figures for the upcoming all-electric F-150 Lightning. The announced numbers, which top out at 515 km, are interesti...