With gasoline prices so high, it was only a matter of time before we saw a drop in demand worldwide – and that’s what’s being observed now. When possible, many people are cutting back on travel.

As reported by Autoblog on Friday, the Yahoo Finance Group spoke last week with several strategists to get their views on when a drop in demand may be observable.

“One could argue that demand destruction for gasoline has already started,” said Peter McNally, global head of industrial, materials and energy at Third Bridge (a web development company that provides digital solutions and cross-platform software). “Since the start of March, U.S. gasoline consumption is 6% lower than the corresponding period in 2019.”

In the United States, the national average is flirting with $5 per gallon. In the Los Angeles area in California, the $8 mark has been reached and passed. And as we reported last week, the price of gas is approaching the equivalent $3 CAD per litre in England.

The U.S. Energy Information Administration (EIA) has for its part now noted a slight decrease in gasoline demand compared to 2021. 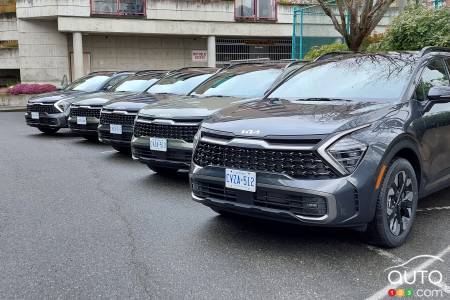 The increase in pump prices is related to the rising cost of crude oil. The problem is exacerbated by the limited number of refineries.

The big fear is that higher energy prices will contribute to an economic slowdown. Already, the effects are being felt. The word "recession" is increasingly being bandied about by economic analysts.

And to this reality we can add the ongoing impact of Russia's invasion of Ukraine. The sanctions imposed on Moscow by the West briefly sent Brent crude oil prices above $130 a barrel in March. Many are hoping for a quick resolution to the conflict so that the pressure can be relieved and allow for prices to drop back down.

A survey of what different analysts are predicting about what might happen to prices or the possibility of a recession reveals a variety of opinions. Simply put, there’s an overarching sense of uncertainty, and the continuation of the volatility of the past few months is about the only thing experts really agree on.

Another point of consensus? That the price of gasoline is likely to continue to rise before it starts to fall back. Analysts at JPMorgan recently predicted that the national average could reach $6 per gallon in the U.S. and even higher by August.

Here in Canada, some have raised the possibility of $3-per-litre gasoline. While that seems far-fetched, so did the idea of $2/litre gasoline six months ago. The best hope for a reprieve may lie in a substantial drop in demand (remember what happened at the beginning of the pandemic).

According to the EIA, demand over the past four weeks is about 2 percent lower than the same period last year. Going forward, if prices continue to climb, demand will fall further, which should eventually drive prices down.

In the meantime, that sound you hear is Canadians possibly rethinking their travel plans for this summer.

UK Gas Prices Reach the Equivalent of $2.87 CAD Per Litre

It isn’t just in Canada that gasoline prices are reaching alarming heights. Motorists in the UK are facing prices closing in on the equivalent of $3 per lit...

Despite very high prices at the pump, many Canadians still want to take a vacation this summer, and use a car to do it. That's according to a survey conducte...

A Chicago businessman is, for a second time, giving away $50 worth of gas to anyone in the area who wants it. After an earlier $200,000 total giveaway, this ...